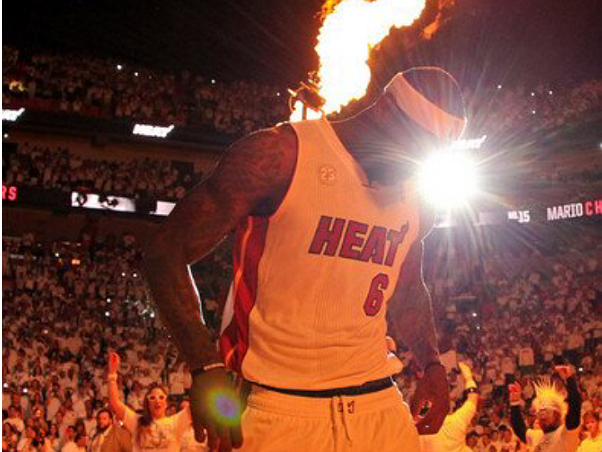 We should’ve seen this coming.

For the past two years, the National Basketball Association has seemed little more than a playground for LeBron James at times.

With the NBA Finals set to get underway this morning, James is presented with the chance to right his only remaining wrong.

His transformation from man-child to freak of nature has taken place before our very eyes, albeit it slightly judgmental eyes, since he left his hometown Cleveland Cavaliers for the Miami Heat.

After being humbled and shamed on the biggest stage in his first South Beach season, James has systematically exorcised every demon his doubters would highlight.

The most glaring criticism of “King James” was his inability to perform in the clutch – he’s put such assertions to bed.

According to ESPN, since James entered the league is 2003; no player has made more game-tying/go-ahead field goals in the final 24 seconds of the fourth quarter or overtime.

In addition to having connected on the most shots – 7 of 16, his 43.8 percentage tops the league as well.

Further, he collected another statistical accolade after dispatching of Indiana in Game Seven of the Eastern Conference Finals.

However, all the MVPs, championships and walk-off shots couldn’t eradicate his final demon.

Back in 2007, making his first trip to the NBA Finals, James and the San Antonio Spurs swept aside his Cleveland Cavaliers, crushing them 4-0.

In the moments after San Antonio vanquished Cleveland, Tim Duncan embraced a guttered LeBron James, attempting to comfort the young star by saying his time would come.

How fitting it is, LeBron’s reign could unquestionably be confirmed over the next few weeks, at the expense of an opponent who’s star foreshadowed it.

2013 was something of a tour de force for Miami.

The Heat amassed an incredible 27-game winning streak, en route to a league-leading 66-16 record on the year.

At their beat, the Heat consists of an unstoppable blend of finesse and strength.

They were knocked off their game by a physical Pacers side in the Conference Finals, but the Spurs don’t have the players to replicate such a performance. Nor do they have the athleticism.

Expectantly, largely as LeBron James goes, so will Miami.

The reigning MVP is the best player on both ends of the floor, and astonishingly can realistically play any position. Resultantly, Miami should be able to tweak James’s role on the fly, exploiting the different possible advantages certain to arise throughout the series.

The Miami Heat is no longer the three-headed superstar monster they were designed to be, with the great LeBron James supported by the very-good Dwyane Wade and Chris Bosh.

However, such is the level of James’s ascension to the uppermost echelon of the league, Miami is still the team to beat.

The Spurs are the most balanced, complimentary team in the league. While its opponent could be accused of being a high-priced collection of stars, San Antonio is reminiscent of a perfectly assembled basketball puzzle.

From coach Gregg Popovich down, every Spur has a role to play; they’ll all need to hit their spots in this series to emerge victorious.

Über-star Tim Duncan will need to continue to stave off father time, and continue to produce at the level he has throughout the playoffs. If this is Duncan’s final season in the league, it’s appropriate the curtain could fall on his career whilst the bigman is still an integral cog in a championship machine.

However, Tony Parker’s play from the point guard position is the most important element for San Antonio, something only amplified by the fact his position is the only one where the Spurs hold a clear-cut edge.

If Parker can effectively run a pick-and-roll game it should help the Spurs keep the Heat off-guard, allowing their perimeter players to get some open looks against a defensive unit forced into collapsing to try and protect the rim.

Much like Dwyane Wade for the Heat, the health of Manu Ginobli has the potential to swing the series, with the Spurs Argentinian superstar having battled through injuries all season. If healthy and effective, he can help lead the Spurs second unit for extended minutes and give San Antonio a legitimate clutch presence late in games.

It won’t be easy for the Spurs, but the blueprint is certainly there for them to capture another championship.

In some ways, San Antonio somewhat fit the supposed formula to beating Miami. They have significant height in the post, something the Heat has struggled to overcome in the past. Throw in a top-tier perimeter defender in Kawhi Leonard, and the case can be made they have a real chance.

However, Miami should be too good.

If Bosh and Wade stay healthy-ish – anything over 85 per cent would suffice – the Heat should be able to see off the challenge. Plus, after having to battle against an Indiana team that matches up perfectly against it, Miami has been forced to work around match-up issues.

Miami in 5
If you prefer your preview without all these words, listen to our NBA Finals podcast here.