There has been no shortage of support for the US as they protest the death of George Floyd, but what about Aboriginal and Torres Strait Islander deaths in custody right here in Australia? 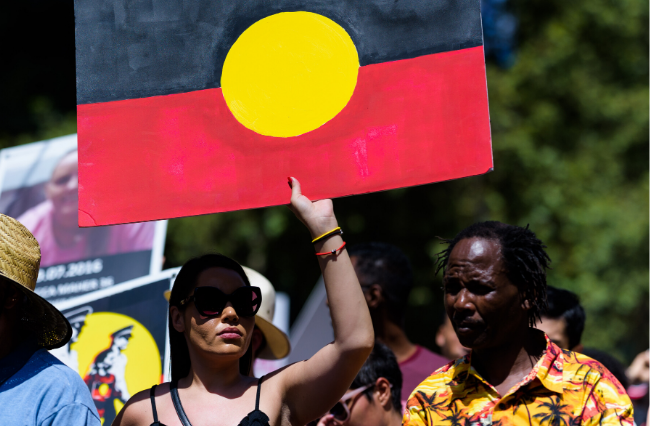 As protests continue in the United States, many Aboriginal and Torres Strait Islanders are reminding Australians about issues of race and law enforcement that we are facing at home.

The death of George Floyd at the hands of police in America has fuelled violent protests, with people protesting on the streets. Floyd’s death has added fire to the “Black Lives Matter” campaign but it has also sparked a loud cry for help from our own Aboriginal and Torres Strait Islander communities here in Australia, demanding that people pay attention to the issue on Australian soil as well as offering their support to the US.

Many cite cases like that of Joyce Clarke, a Yamatji woman who was fatally shot late last year by police after they were overheard by witnesses telling her to drop a knife. The officer who shot Clarke has since been charged with murder, the first Western Australian officer to be charged with murder whilst on the lines of duty in 93 years. Aboriginal man Kumanjayi Walker also died of gunshot wounds in custody late last year.  The case of Kumanjayi Walker, a Walpiri man is also cited after he died from gunshot wounds in custody after being shot following an alleged stabbing of an officer.

Journalist, Amy McQuire,  has called out the inequity in media coverage between the death of Floyd in America and the deaths of people like Clarke and Walker here in Australia.

“Despite both communities coming out immediately in protest, the deaths of Ms Clarke and Mr Walker have failed to reach the same level of Australian outrage when it comes to cases far from our own home,” she wrote on her blog.

McQuire also told the Sydney Morning Herald that Australian media have failed to follow the stories of Aboriginal and Torres Strait Islander people to the extent they deserve.

“We must bare witness to black deaths in our own country,” she said.

There are now more calls than ever for Australians to support their own First Nations people. Twitter has quickly become a storm of voices trying to bring more attention to the deaths of Aboriginal and Torres Strait Islanders in Australia.

“You can’t support the ‘Black Lives Matter’ movement internationally if you do not support or care about black/Aboriginal lives here in Australia,” he wrote.

Another Tweet from Rafief Ismail, a Sudanese writer from WA tweeted that it is hard for people to accept the short comings of their own country.

“While we witness the outrage happening in the US, we can never forget the injustice of this nation that is also built on genocide and the disposition of Black bodies. It’s always easier to look outside rather than our own backyard,” she wrote.