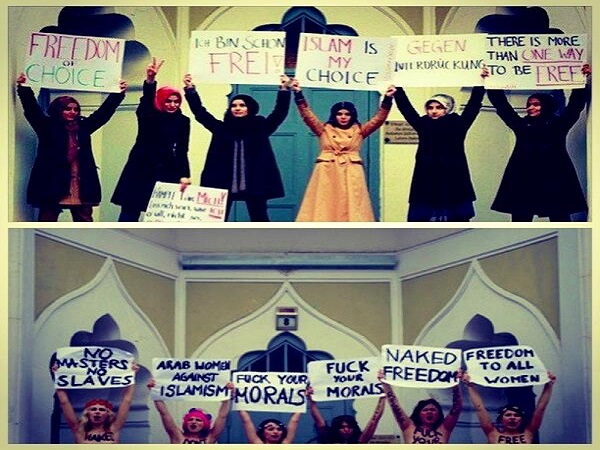 The fight for gender equality is one that is discussed often – and rightly so. To many, the word “feminist” carries an image of an in-your-face, somewhat crazy middle-aged woman. However, this image is determined by one’s individual cultural experiences.

The past weekend saw two worldwide protests about the freedom of women in Islam and proved why cultural reflectivity is important when fighting for a cause on behalf of others.

The first was organised by Ukrainian-based feminist group Femen. The self-proclaimed “sextremists” – known for staging topless protests around the world – declared April 4th “Topless Jihad Day”. The protests, organised to support Tunisian feminist Amina Tyler, were held in front of Tunisian Embassies and religious institutions across the world.

Amina Tyler, a 19 year-old Tunisian girl, received a number of threats last month after posing topless for Femen, with the words “My body belongs to me, it is not the source of anyone’s honour” written across her chest and torso in Arabic. While their cause is respectable, as always it was Femen’s method of protest that drew attention. Femen supporters across Europe protested outside mosques with the words “f*** your morals” and “religion kills” written across their bodies.

The organisation’s actions drew criticism from one particular group of people, Muslim women, and as a Muslim myself, I can see where they are coming from. Chanting slogans such as “religion kills” and “breasts against Islamism” in front of a place of worship is disrespectful and also misrepresents feminism. The slogans also equate a radical political ideology, Islamism, to a religion, Islam. While the two are related, it is important to remember that they are not the same.

Femen’s mission to promote equal rights is honourable, however their protest had the side effect of offended many Muslim women. Many women in Europe, especially in France, have fought for the right to wear scarves and dress modestly. France is currently considering a court ban on all head scarves. Therefore, protesting in the name of these women topless sends the message that the right to cover-up is less important than the right not to.

Muslim women against Femen soon started a social media protest of their own in response to Femen’s actions. The event’s Facebook page stated that it was an opportunity for Muslim women to get a say and show that they too have a voice and support freedom for all women.   In honour of the protest many women posted their opinions as well as pictures on Facebook and twitter.

“If you want Muslim women to stand up for themselves you can’t denigrate their culture and expect them to listen to you.” #MuslimahPride

Not considering the fact that a great showing of solidarity in one culture might be seen as offensive in another is what caused the backlash from a very vocal group of young Muslim women.

#FEMEN I DO NOT need your racist liberating! Post your pics & messages to facebook.com/events/4059751… #MuslimahPride twitter.com/TheLatif/statu…

While many criticised Femen’s method of protest, numerous participants also spoke about the misrepresentation of Muslim women as being oppressed or used to criticize Islam. Cultural difference played important roles in both these protests and was the main cause in their disagreement. Investing more time in understanding these cultural differences before beginning a crusade would really improve the impact of future efforts from groups like Femen.

The problem with their protest was that it looked upon Muslim women as a vulnerable group that fails to stand up for themselves. Femen should have worked with groups of Muslim activists to protest for all women’s rights, whether it is to wear a scarf or not. Femen’s protest did receive coverage because of their methods, but a joint protest would have done much more for furthering the rights of Muslim women.

However well-intentioned their protest, Femen should have looked at the culture and beliefs of the people they are trying to “liberate” and worked in accordance with it, not in complete disregard of it. If both these groups could work together in their campaigns for freedom and equality, their actions would carry much more weight.