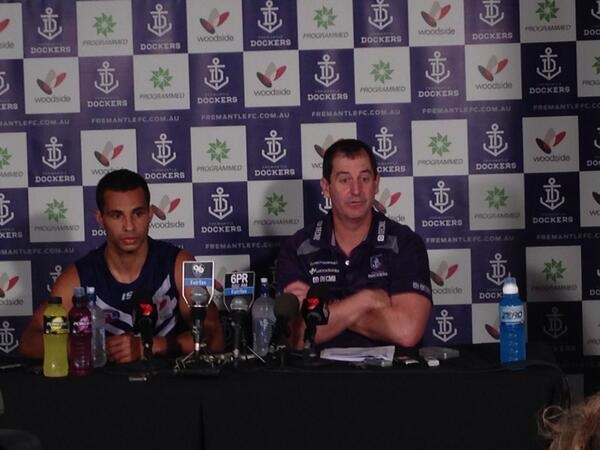 As we progress from the last of the bye rounds into the second half of the AFL season, there are a few surprises in a largely predictable top eight.

New Port Adelaide coach, Ken Hinkley, has breathed new life into the club, with the Power winning seven of their first 12 games in 2012 after a horrendous couple of years under Matt Primus.

Geelong have also surprised many who thought they would slide further down into the bottom half of the top eight, by sitting second on the ladder. But perhaps the most intriguing team in the top eight is Fremantle.

No one should be surprised by the Dockers presence in the top four – after a thrilling finish to 2012 that saw them beat the more fancied Cats in an elimination final and narrowly miss out on making a preliminary final. However, it is how they have stayed in contention this season that has been the most impressive.

Fremantle’s two best players, captain Matthew Pavlich and ruckman Aaron Sandilands have been sitting on the sidelines for most of the season, with Pavlich playing just three games and Sandilands missing every game so far in 2013. Yet the Dockers have lost just two games this year. What makes their record even more impressive is the fact back-up ruckman Jonathon Griffin has missed the past month of football as well.

Fremantle has managed to weather their injuries by executing Ross Lyon’s defensive game plan to a tee. The Dockers have the fewest points against this season by a fair margin. They have allowed just 799 opposition points through 12 games, with the next best being Sydney with 920 points against.

Never was this more evident than in their round 13 game against North Melbourne, where they allowed the Kangaroos to score just 29 points for the game – the second lowest tally by any team this year.

Lyon’s high pressure, suffocating game plan has frustrated opposition clubs and fans ever since he used it to full effect in leading St Kilda to back-to-back grand final appearances in 2009 and 2010. Transitioning the game plan from St Kilda to Fremantle has been almost seamless from an outsider’s perspective.

Lyon has also adopted a win anywhere, anytime mindset at Fremantle after the club was notoriously poor outside of Perth under Mark Harvey. The players brought in this philosophy in 2012, winning seven interstate games including their first finals win away from home when they defeated reigning premiers Geelong in the first week of September.

Fremantle shocked the football world on that night by kicking the first five goals of the match and announcing their arrival as a top four contender. The Dockers did it in trademark Lyon fashion by pressuring the Cats with large numbers around the ball and forcing them into errors.

Many fans have criticised Lyon’s teams for playing a boring, low scoring brand of football, but apart from falling agonisingly short on grand final day twice, it is hard to argue with the results. The questionable tactics of Fremantle players Hayden Ballantyne and Ryan Crowley have riled opposition players and made them villains around the league; but both offer enough with Ballantyne’s role as a dangerous small forward and Crowley’s role as a tagger to make them ‘best 18’ players.

The progression of players such as Nat Fyfe and Michael Walters, and the return of young gun Michael Barlow under Lyon has seen the Dockers return to prominence. Smart recruiting has allowed them to add to their depth with the likes of Danyle Pearce and Zac Dawson – a Ross Lyon favourite.

Many Fremantle players and fans, who initially had reservations about ousting popular former coach Mark Harvey, are now singing Lyon’s praises. A 63 per cent career win percentage as coach and a promising future for the club suggests they have reason to.