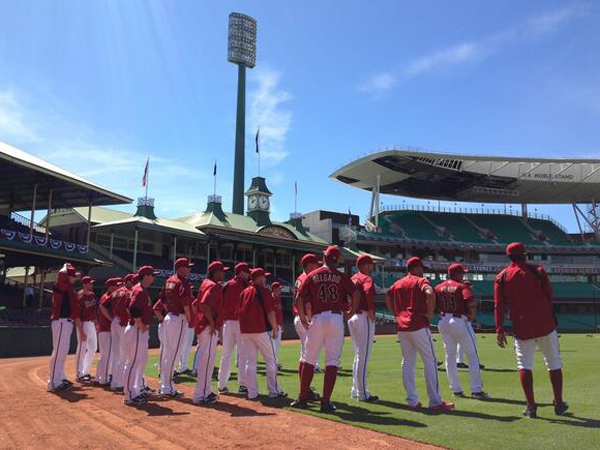 The Los Angeles Dodgers and Arizona Diamondbacks have both landed in Sydney and are set to play off in the first regular season MLB series match in the Southern Hemisphere.

As well as playing in a two-game series across the weekend at the SCG, each team will also play Australia’s national team in a warm-up game on Thursday and Friday.

Despite the negative media attention that Dodgers pitcher Zack Grienke recieved after suggesting the players have “zero interest” in the series, there is only one way to look at these four games- that is, in a positive light.

In a big boost for the series, the Dodgers will send their starting pitcher, Clayton Kershaw, to the mound in the opening game. Kershaw is currently on a seven-year deal worth $215 million. That is the richest deal in Major League Baseball history, eclipsing the seven-year, $180 million deal that the Detroit Tigers gave to their starting pitcher Justin Verlander at the end of the 2012 season.

Last season, Kershaw ranked No.1 in ERA (Earned Run Average) with 1.83, No.3 in strikeouts with 232 and No.2 in innings pitched with 236 innings. He also went 16-9 in his 32 games pitched compared with the leader in wins (Max Scherzer, Detroit Tigers) who tallied 21.

There are plenty of other big names making to the trip to Australia. Diamondbacks first baseman Paul Goldschmidt is the headline act, coming off a breakout season where he led Arizona in almost every offensive category. Goldschmidt finished the season with 36 home runs (equal third in the MLB) and 125 runs batted in (third in the MLB).

Joining Goldschmidt on the Diamondbacks team will be third baseman Martin Prado. Prado had 14 home runs, 82 RBIs and a .282 batting average last year.

For the LA Dodgers, we are likely to see names such as corner outfielder Yasiel Puig, shortstop Hanley Ramirez and first baseman Adrian Gonzalez.

All three were offensive weapons last year and are high-profile names in the US. Puig exhibits a great deal of speed, so expect him to be stealing a few bases. Hanley is a very all-round player. He’s capable in the field and is strong at the plate, with an ability to hit for a high average and show some power. Meanwhile Gonzalez is a former Boston Red Sox superstar who hits a lot of home runs and drives in plenty of runs too.

With all of these players on our shores, baseball fans in Australia with be licking their lips at the prospect of some top-quality baseball played in the country.

While it may be a slight disruption to the teams’ preparations – they have to finish their pre-season schedule 10 days earlier than every other team in the MLB – it will certainly be a prosperous journey to increase the fan bases of both teams.

Already, people from all around Australia are jumping on the Dodgers – one of the MLB’s headline franchises from Los Angeles – or the Diamondbacks, a lesser-known franchise from Arizona.

Scoping out the new digs. pic.twitter.com/b65yBwvIJD

The series will bring plenty of American tourists to Sydney and businesses throughout the region will benefit. While this may only be a two-game series now, it could turn out to be the first step towards many games played in Australia.

But perhaps the biggest upside from this series is the advertising that Australian baseball will get. It may be unknown to the average punter, but every state has at least one or two leagues – including junior and senior competitions – that are stocked full of teams.

The added publicity that this series will get (due to be broadcast on free-to-air on GEM) and the extra talk that it’s getting in the press is only an advantage for the sport in Australia.

The Australian Baseball League currently has an average attendance of around 1,100 people. The Dodgers and Diamondbacks series will further advertise this six-team competition that we have and plenty of young kids will also be further attracted to the sport.

Regardless of whether another series is played down under or not, baseball’s popularity in Australia will be sure to flourish.

The two-game series will be held on Saturday the 22nd and Sunday the 23rd March. Check your local guides.

Jarrah Vella-Wright is a first-year Bachelor of Journalism (Sport) student at La Trobe University. You can follow him on Twitter: @jarrahvw.