Richmond star is under criticism for an off-the-ball hit and sledging incidents during Saturday's clash with GWS Giants. 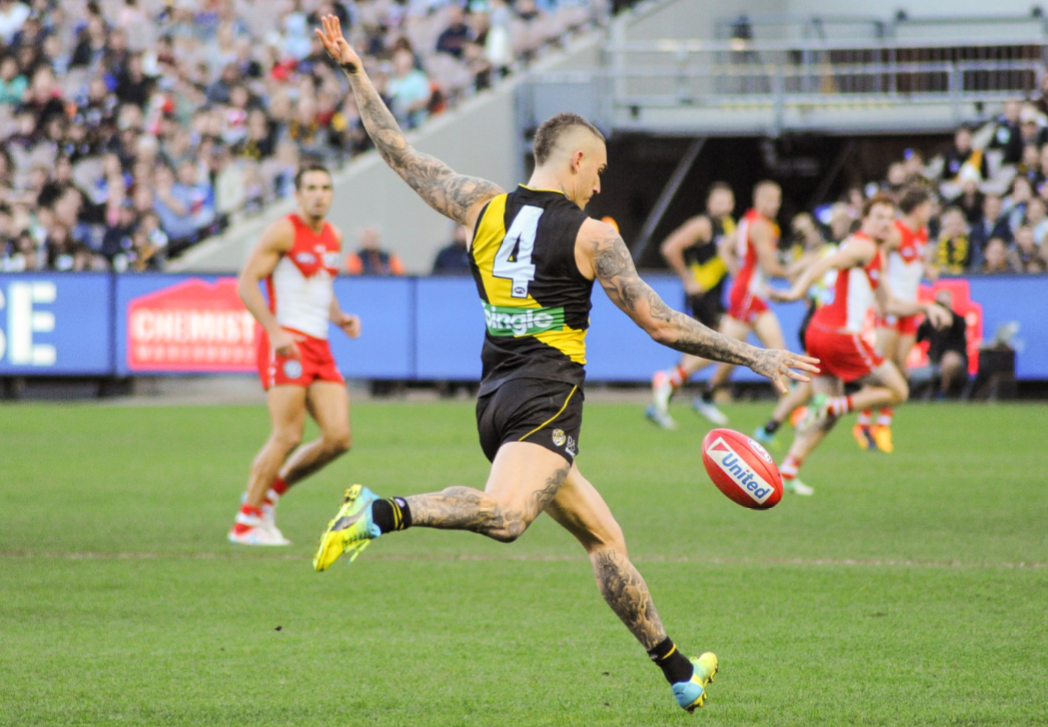 Richmond midfielder, Dustin Martin, will face the Match Review Officer today for an off-the-ball hit on an opponent, with further questioning over a couple of sledging incidents.

The second-quarter hit saw Martin elbow the GWS player, whilst the Tigers had a kick in.

Tigers superstar Dustin Martin is set to come under scrutiny for an on-field sledge, and an off the ball elbow. @TomChadwick_7 #7AFL #7NEWS pic.twitter.com/SdzvEXWRmG

The incident gave away a free kick to the Giants, which lead to an easy goal.

Martin raised his middle finger at an opponent seemingly in response to a sledge, then proceeding to imitate snorting drugs.

It is speculated that the incidents were directed at opponent, Shane Mumford, who returned this week for after being suspended for two rounds following a video from years ago emerging of him snorting white powder.

After the match, Mumford said he hadn’t seen the gestures, but acknowledged he had mouthed-off at Martin prior to the speculated incidents.

“I’ve got no idea,” he told Sporting News.

“No idea. I was abusing him from the other side of the field, I know that. Obviously there was [something] but I didn’t see it, so it didn’t have any effect.”

Early reports suggest that the AFL did not originally have an issue with the gestures made towards Mumford.

Channel 7 sports journalist, Mark Stevens, tweeted that the AFL have changed their stance confirming that they will be looking at the sledging incident.

Early reports that AFL didn’t have an issue with Dustin Martin “bird” and sledge are now off the mark. Can confirm it will be looked at by league, outcome today or tomorrow. @7NewsMelbourne

In 2013, Martin was given a suspended $2,000 fine for gesturing handcuffs while celebrating a goals in an elimination final.

Two years later, he was given another $2,000 fine for giving the two-finger salute to Collingwood fans.

The incidents come after Martin has been heavily criticised for his lack of defensive pressure, failing to lay a tackle in the opening two rounds, and for the first time in his 10 season career, failing to score a goal in three rounds.

Martin was left frustrated after GWS tagger, Matt De Boer was able to restrict the 2017 Brownlow and Norm Smith medallist to just 15 disposals during Saturday’s clash, culling his career average of 25.2.

“Protect the ball-carrier, is what I’m saying. Don’t get me wrong, De Boer did a terrific job, but geez. I’m certainly frustrated,” he said.

If Martin is suspended for the hit today, this could mean that Richmond will be without their Big Four coming into Saturday afternoon’s game against Port Adelaide.

The suspension will also put Martin out of contention to win his second Brownlow Medal this year.

The Tigers have lost Alex Rance for the rest of the season with a knee-construction and Jack Riewoldt with a wrist injury.

With the AFL expected to be cutting down on off-the-ball hits this season, this is a worrying Monday for the Tigers.

Photo: Photo Dustin Martin Kicking by Flickerd available HERE and used under a Creative Commons Attribution. The image has not been modified.