A fantastic World Swimming Championships has Matthew Temple excited for what lies ahead. 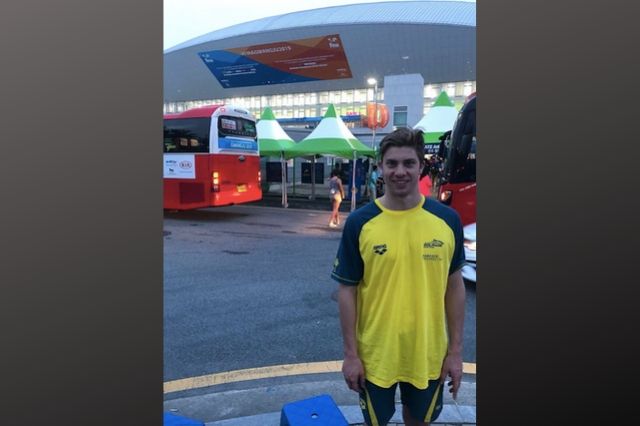 Originally, the AFL was the stage that Matthew Temple wanted to light up, while a casual dip in the pool was just a hobby. But it didn’t take long for him to realise that his swimming may be more than just that.

Temple has just returned to Australia after two weeks in South Korea where he represented the green and gold for the first time at the 2019 World Aquatics Championships.

He told upstart that he sensed a great opportunity to swim professionally.

“I was doing both swimming and footy for a while, but I gave up footy in under 12’s to swim more because I loved it,” Temple said.

“After that change, that’s when I realised I could give [swimming] a red-hot crack, but I didn’t know how far I was gonna go. Looking back, I’ve just loved progressing through the ranks, and getting to where I am now, makes it so much more enjoyable to see all the hard work paying off.”

At the World Swimming Trials in Queensland last June, Temple smashed his personal bests in each of his events, doing more than enough to qualify for his first international competition.

Of the 27 men and women that represented Australia in the championships, Temple was the only one who had not competed on a global scale before, and while that prospect was daunting, he got a firsthand experience of the “mateship” that exists within Australian sporting teams.

“I didn’t know what to expect going over there because I’ve never been on anything like that before,” he said.

“I did get to realise how good the team environment was for Australia, everyone got around each other and it helped me settle. Pretty much all I wanted to do while I was there was try and better my times like I did in the [World Champs] trials.”

Temple competed in the 200m butterfly where he was 0.37 of a second away from earning a spot in the final. But a few days later in the 100m butterfly, Temple cruised his way into the final, before completing the race with a time of 51.51, in sixth position.

He also was a part of the Australian Men’s 4x100m medley relay team, which finished fifth in the final.

Temple gives some credit for his achievements towards his career-defining decision, at 17, to move his training from the smaller Greensborough aquatic centre [now Watermarc], to the larger Nunawading Swimming Club, where a few of his friends had already gone.

“I really lost my interest in swimming because I wasn’t with them,” he said. “My mates at Nunawading loved it there, so at that point it was sort of either time for me to quit or move.”

“I lost interest but also I wanted to see how far I could get in my swimming because I can’t swim like this when I’m thirty years old.”

Although the move has seemingly paid off for him competitively, Temple was unsure about whether he had made the right decision. But the assurance of his family and their willingness to move to the other side of the city to support him, is something Temple is truly grateful for.

“I used to live in Mill Park and when I moved, they moved their life just for me and I couldn’t have done it without them,” he said. “They’ve played a big role in my swimming journey.”

The timing of Temple’s World Championship performance couldn’t have been better with the 2020 Tokyo Olympics beginning in just under 12 months. While the expectation on Australian swimmers might be high, all Temple is looking to do is try and continue to make positive strives in his development and hopefully, reward himself with an Olympic appearance.

“I don’t really have any [expectations], I’m just going to push as hard as I can like I did for the World Champs,” he said.

“My ultimate goal would be to make the Olympics, but I know there is still a lot of work to do. When you know you’re representing your country on the big stage, it’s an insane feeling and I hope to do it again soon.”

Although there are exciting times ahead for Temple, one thing that won’t change is his love for his Richmond Tigers, assuring himself that he will get as many updates as possible when he’s swimming away from home.

“During the champs, it was pretty hard to watch any footy, all I could do was really check the score here and there,” Temple said.

“But I’ll make sure I’ve got a good connection to watch the Tigers from back home whenever I’m away during footy season.”

Nicholas Sacco is a second year Bachelor of Media and Communications (Sports Journalism) student at La Trobe University. You can follow him on Twitter @NicholasSacco22

Photo: Supplied and approved for use by Matthew Temple