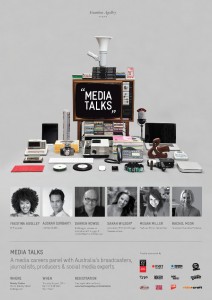 Hosted and organised by TV personality Faustina Agolley, the event gave a chance for VCE and university students to hear about and interact with the media from professionals within the industry.

During the application process for Media Talks, I was a bit overwhelmed by the amount of interest it seemed to have gained. I had to apply and compete for my seat – a subtle reminder of how competitive the media industry is.

Arriving at Rokeby Studios in Collingwood, I managed to strike up conversation with other students immediately.

For me, Media Talks was more than just a forum for advice and networking with the panellists. It was also a chance to meet and befriend with like-minded students (and I managed to score extra Twitter followers in the process).

Here’s a rundown on what the panellists had to say.

Media Talks began with introductions from all five panellists (panellist Rachel Moor was unable to attend) including Agolley herself. After her trip to Africa, Agolley became motivated to make the most of her resources and work hard to gain a media career. Agolley was always looking for work, while being as friendly as possible to all the media professionals she met throughout her life.

Media Talks was created by Agolley to help all of us aspiring media students ‘get a foot in the door.’

When asked about her career, Agolley believed that natural, conversational style was the best way to approach broadcasting, as well as taking advantages of the opportunities you’re provided with.

Auskar Surbakti, the award winning ABC journalist, said that media students should show initiative in relation to the media and gaining a profession in the field.

Surbakti also suggested to use multiculturalism, particularly foreign languages, to your advantage, because it can help you gain traction in media organisations (like he did at SBS and Channel Ten).

Herald Sun features writer Megan Miller mentioned some tips for journalists, such as keeping a hardcopy contact book and to double check everything.

Miller also said to always look at both sides of the story in general reporting, particularly when writing about confronting or controversial issues

Miller also great advice for people who are looking to be published if they’re passionate about a topic: ‘Write an [opinion piece]… and send it in to the Herald Sun… If there’s something you feel strongly about, write 800 words and send it in’.

Miller’s confidence in student writers made me feel slightly better about the future of print media.

The outlook of print journalism, especially in light of the redundancies announced yesterday at Fairfax, doesn’t bode well for people in the profession, and those looking to enter it.

However, Miller is a great example of someone who is still successfully publishing in print, and was a valuable panellist.

I had never come across Sarah Wilson before Media Talks. Appearing via Skype, I could instantly sense Wilson’s love of writing and the media industry.

Wilson had a great point for potential media professionals who want to break into the competitive media industry: ‘I got noticed because I was doing something that I loved.’

Wilson also had this advice, which I think bodes well in the current media climate: ‘The people surviving are the ones who have skills. People still need to be able to write in the media world.’

Rowse was the final panellist, and he was definitely the most hilarious and infectious panellist there.

Rowse runs two popular blogs: a blog on blogging, and a photography blog.

Rowse said that he would ‘avoid news’ if he was starting out in the media world. The internet is full of ‘so much junk’, and creating a niche field and target audience is a great way to attract attention to your blog according to Rowse. ‘Story is [also] gold on a blog,’ Rowse said.

A self confessed introvert, Rowse also told the audience to get out of their comfort zone, as that’s how some of the best exchanges and experiences can be gained.

Media Talks was not only for information and advice. Hearing the panellists gave me further inspiration to keep pursuing my goal to become part of the media. I found direct, face-to-face and engaging communication from these media professionals much easier to relate to than words from a textbook.

I’m really thankful that Agolley decided to organise this event. I hope that all the other students who attended the event gained inspiration and enjoyment out of it.

According to Twitter, the people tweeting about #mediatalks, seemed to enjoyed it.

Agolley also announced that the video of Media Talks, podcasts with all of the panellists, as well as further updates about possible media opportunities will be uploaded on Agolley’s website.

This piece of advice from Surbakti is an inspirational way to approach a media degree, and a nice conclusion to this article on Media Talks:

Olivia Clarke is a Bachelor of Journalism student at Monash University. You can follow her on Twitter : @livviclarkey