There is concern amongst some of Melbourne’s bayside residents about the proposed sky rail in the area, Connor O'Leary writes. 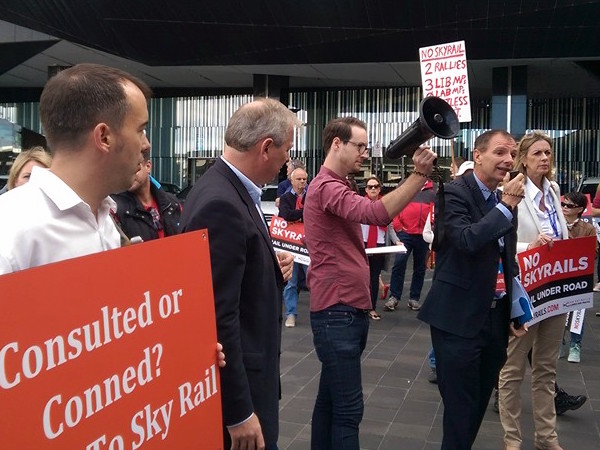 The Andrews Government’s plan to build sky rail on sections of track between Caulfield and Dandenong on the Cranbourne-Pakenham lines has been divisive amongst the local community.

Expected to be fully operational in late 2018, four stations along the line will be rebuilt whilst all nine level crossings between Caulfield and Dandenong will be removed – hence the need for a sky rail.

The rail corridors in Melbourne’s south-east are the busiest in the metropolitan area and, to ease congestion for road users in the city’s bayside suburbs, 11 level crossings are being removed along the Frankston line.

Works have already begun on level crossings in Ormond, McKinnon and Bentleigh, with eight others to be removed between Cheltenham and Frankston.

There is yet to be a decision made on whether sky rail will be required along the Frankston line, with Public Transport Minister Jacinta Allen saying last month that the strategy along the line may be different to that of the Cranbourne-Pakenham line.

“The approach that’s been taken on this corridor (Cranbourne-Pakenham) is not necessarily the outcome that will be taken on the Frankston corridor and I think it’s wrong to assume it would be,” Ms Allen said

However, the threat of sky rail alone is enough to anger residents who live along the Frankston line.

Parkdale resident and founder of noskyrail.com.au Simon Johnson argues that sky rail along the Frankston line is going to negatively affect more than just the bayside’s natural beauty.

“We believe that sky rail will create a place for anti-social behaviour and crime.” Johnson tells upstart.

“It will negatively impact neighbourhood character … for example, an increase in the risk of vandalism, graffiti, dumping of cars and rubbish.”

Along with Justin Scott, Johnson has created noskyrail.com.au in a bid to prevent sky rail from being built in the community.

After a while, the two decided to pool their resources to fight against sky rail, rather than continuing to operate as two separate entities.

“Sky rail will have a catastrophic impact to small businesses … local shops and cafes may be forced to close,” Johnson explains.

“Also, we believe it will lead to a decrease in property values and a reduction in daylight, which may contribute to health issues within the community.”

A number of small business owners in the area have also shown their support for the anti-sky rail movement.

Level crossing removal signs have been vandalised in recent weeks, further highlighting the angst amongst the bayside community.

Johnson and his group “agree 100%” with the removal of level crossings to ease congestion and improve safety for residents.

However, Level Crossing Removal Authority (LXRA) is yet to make a decision on the new design for the level crossings on the Frankston line. With sky rail not completely out of the question, Johnson believes there are other options.

“There are many alternatives,” Johnson says.

“Methods may include cut and cover, rail under road or doing nothing.”

The LXRA will make its decision later in the year and although the solution may not be clear, one thing is for sure – these residents will not stand for sky rail.