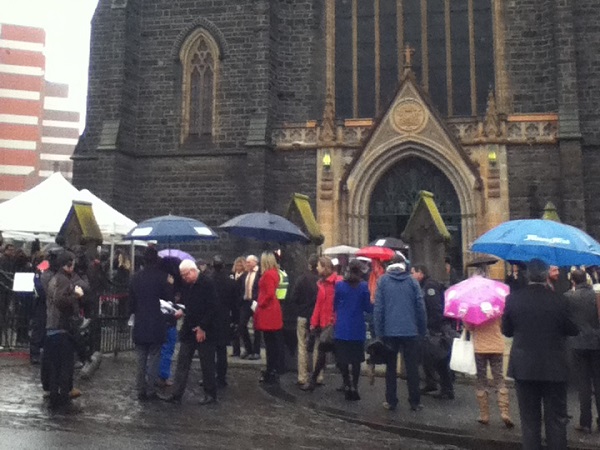 The pews of Saint Patrick’s Cathedral were full yesterday as nearly 1800 people paid their respects to the victims of the Malaysia Airlines tragedy.

The multi-faith memorial service celebrated the lives of the 38 Australians who were killed when their plane was shot down over Ukraine. The family members and friends who lost their loved ones in the tragedy were joined by politicians, dignitaries and members of the public who all gathered to show their support.

Emily Candish was one of those supporters.

“I came to remember the dead. It’s a very sad and moving occasion. There were a few people in Melbourne who I wanted to be here for,” she told upstart.

Colin Youren never knew any of the victims, but he thought it was important to attend the service.

“I came because I’m an Australian. I wanted to see what a beautiful service it was and to see the qualities of the 38 Australians we lost,” he said.

The patriotic sentiment was echoed by Governor-General Sir Peter Cosgrove, Opposition Leader Bill Shorten and Prime Minister Tony Abbott, who all spoke at the service. Each spoke of the sympathy and support all Australians had for those who had lost loved ones.

“To those of our fellow Australians who remain in the depths of their loss, we cannot ease the burden you bear, but today and always we will honour your loved ones and we will be with you to help you carry on,” said Mr Cosgrove in his address.

Premier Denis Napthine reaffirmed the public’s support for mourning family and friends after the service, saying: “I think all Australians’ hearts go out to those who have lost loved ones. We offer our prayers and support for the families.”

Today, we reach out to those who are grieving and say you are not alone #MH17 pic.twitter.com/8nPEKcz6rJ

The cathedral itself featured multiple Australian flags and wattle banners, as well as a memorial wreath representing the victims, made from wattle branches. Outside the cathedral, flags were raised at half-mast to show respect for those who had died.

Katie Noonan sang a beautiful rendition of I am Australian, but the most powerful moment had no words.

At the end of the service the families of the victims were invited to place sprigs of wattle on the large wreath in front of the altar. As they lined up, many overwhelmed by emotion and loss, the screens scattered around the church broadcast images of the people lost on the flight.

The images were full of life. One woman was showing off her Bachelor of Science certificate. A young man was kneeling next to a new love lock on a Parisian bridge. A family posed together outside their house.

No one in the cathedral was left untouched by this devastating juxtaposition of smiling photos and grieving loved ones.

Erin Leeder is a second year journalism student at La Trobe University. You can follow her on twitter at @155erin.