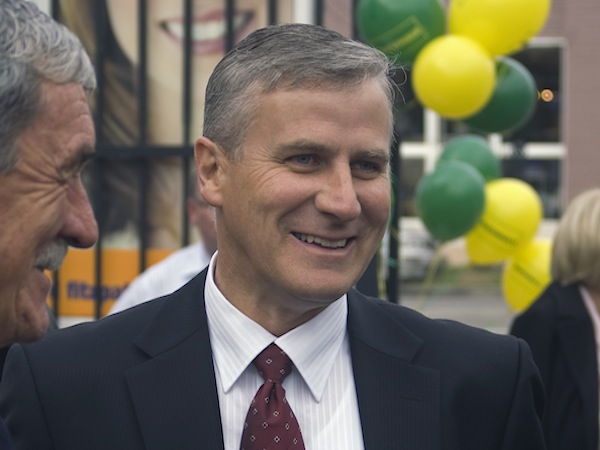 It was a natural progression for the man from Wagga Wagga who he decided to trade journalism for politics. After having been the editor of The Daily Advertiser for 11 years and running his own publishing company for 10, Michael McCormack finally turned to work serving and advocating for the people.

The MP for Riverina burst into the political scene in 2010 when he ran in a three-waycontest against Labor and Liberal candidates and emerged as the winner for the National Party of Australia with 67% of the vote. On April 10, 2013, it was announced that Mr McCormack had been unanimously pre-selected by the Nationals for the upcoming federal election.

There is a quote inscribed on the back of a Rostrum Trophy that he won in 1980 that he holds as a personal motto to this day: “I promise not to be silent when I ought to speak.”

The trophy sits proudly in his office and while the ethos of the quote has admittedly caused some controversy, he firmly believes in it, saying: “…speak their mind, have their say, accept when the decision is made. Certainly they have to pay for what they believe is right because that’s what the people who elect them expect them to do and unfortunately I’ve seen too many examples of politicians who just go with the flow and it doesn’t serve the interest of their people.”

He is a man wary about the various forms of media. While he believes that media organisations play a part in exposing the unscrupulous façade of, politicians, the constant anonymous criticism needs to stop.

“When I was the editor of the newspaper, if you want to criticise somebody, we didn’t have a problem with it but you had to put your name and I reckon the number of letters that I published in my newspaper would be almost, probably 10 times what they publish now,” he says.

McCormack is a strong supporter of the freedom of speech; he feels it isn’t necessary for the government to enforce regulations because “regulations and bureaucracy make it very difficult for free speech to be maintained”. Evidently, current technology has made conventional approaches to regulation difficult. With everyone owning a at least a mobile phone, videos and photographs become easy to take and upload, and suddenly, they do definitely seem louder than words.

Hence, McCormack is very careful about what he says and even what he tweets. While he is critical of the government and its policies from time to time, his focus is mainly to portray a positive image of Riverina. In his own words, he likes to “keep it local”.

Tradition is also important to this man from Wagga Wagga.

When he first entered Parliament, he started a writing competition for school children to commemorate ANZAC day because he wants the lives of the 69, 431 soldiers Australia lost in World War I to be remembered, and also to encourage young Australians to write.

Just as writing in general is supposedly becoming a dying breed, McCormack thinks the day of the print newspaper is dying. But as long as they continue to print them, he’ll continue to read them; he falls into the now-rare category of Australians who read broadsheets, and is almost romantic about them.

“The newspaper is the only place where you can find out all the bits- the births, the deaths and the marriages. I think you’ve got to read the newspaper because that’s a journal, a record of what the local community is thinking and saying and doing,” he says.

Perhaps the reason he holds the inscription on his Rostrum trophy so dearly is because it symbolises his turning point, while summing-up perfectly the balanced the philosophy of both his careers.

This article is part of our ongoing Backbench Insiders series, you can find the full list of articles here.

Lesly Lotha is currently pursuing her Masters in Global Communications. You can follow her on Twitter: @_Lesly_Lesly.