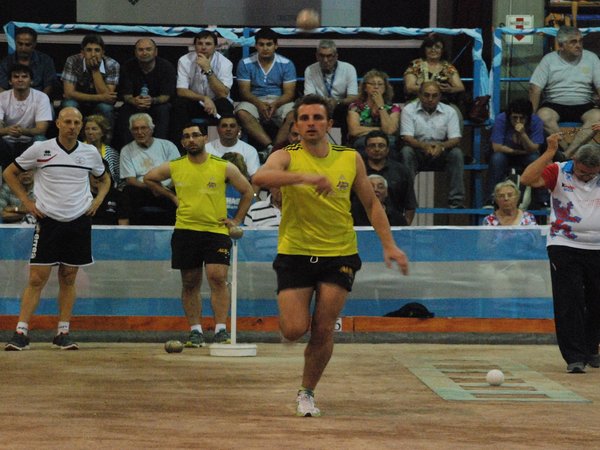 Santo Pascuzzi says that people are often surprised to hear about the skills involved in bocce.

He has a training schedule comparable to a middle distance runner, combined with the added technical training required for his discipline.

Developments to the sport mean it’s no longer considered an ‘old man’s sport’.

Pascuzzi tells upstart that his high school friends were among the believers that the sport was for old men, but they were surprised to see his skill after watching him play.

“When they realise what’s involved and what I actually do, their mind changes,” he says.

Pascuzzi currently holds the Oceania record for the most hits in the progressive throw event.

This event requires participants to hit targets at opposite ends of the bocce court. The participant has five minutes to hit as many targets as possible.

“It really does get difficult if you’re fatigued because you need to maintain the accuracy. If you run slow then you won’t run fast enough to actually be able to hit as many [targets] as your opponents,” he says.

“A lot of players when they start off, they just go flat out and by the last minute they can’t keep up.”

This new form of bocce was developed in the 1980s, as a way to keep younger people involved in the sport.

Other specialised bocce disciplines include the bowl throw and the precision throw.

Pascuzzi grew up playing soccer and tennis, and says that his athletic nature inspired him to participate in the progressive throw.

“I loved running. It was just perfect for me, that event. When I saw that event I was absolutely hooked.”

When asked why he started playing at an Italian club in the suburb of Bulla, Pascuzzi laughed saying “there was nothing else to do there”.

The more traditional form of bocce, or boules as it’s called in France, has been around for a lot longer.

According to Bocce Victoria, the sport originated in Turkey in 9000BC, and was enjoyed by the rich and the poor.

The game spread to Australia in the 1800s, when Italians immigrated to the country.

Pascuzzi represents Australia at international events, and says that Italy, France, Croatia and Switzerland are among the strongest nations in the sport.

He says the key to their strength is that they’re able to play professionally.

The Bocce Federation of Australia receives minimal funding from the government. This money helps Pascuzzi attend the World Championships each year, but any events outside of this must be self-funded.

Because bocce isn’t considered a professional sport in Australia, Pascuzzi says he struggles to juggle training with running his own engineering business.

Although he recently gave up some of his duties, Pascuzzi was the sport development officer at Bocce Victoria from 2006.

“I’m just assisting where possible to give back to the sport,” he says.

Pascuzzi says the sport’s reputation is tarnished by perceptions of it being played by older people, but he says that newer versions of the game present an untapped market.

Televising bocce is a measure he says will help boost the profile of the sport.

This publicity may change the image of bocce, just like the telecast of the Australian Premier League did for lawn bowls.

The upstart sports section and multimedia team are profiling professional athletes from sports not typically covered in the media, in our section, The Other Sports. Throughout this segment we are hoping to convey the life, struggles and dedication of modern day professional athletes. We also aim to give readers an introduction to these sports.