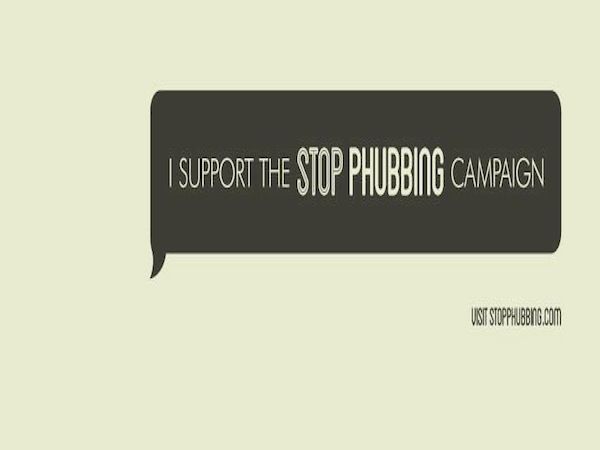 Imagine this: you’re sitting alone in a café anxiously waiting for a friend to show up for a coffee date. Time is ticking slowly and you start to become self-conscious about being on your own. You start to fidget; you don’t know where to look or what to do.

Luckily, you have a saviour sitting in your pocket: it’s your trusty smartphone.

You breathe a sigh of relief. You’re not alone now.

You log into Facebook, check in your location and start a chat conversation. You scroll through your newsfeed endlessly, until you look up and your friend has walked through the door.

He sits down and you begin to talk. A couple of minutes pass before you both reach for your phones.

Sadly, this story has more truth to it than most of us would like to admit. Millions of people around the world are caught up in this social pandemic.

And now it has a name: phubbing.

Phubbing (phone-snubbing) is the act of snubbing someone in a social setting by looking at your phone instead of paying attention to the people around you.

After hearing about phubbing on the ABC television show The Last Leg, I reached for my trusty phone to Google the meaning. There it was, stopphubbing.com, a campaign started by 23-year-old Melbourne University graduate, Alex Haigh.

After clicking the link, this message appeared (pictured below): 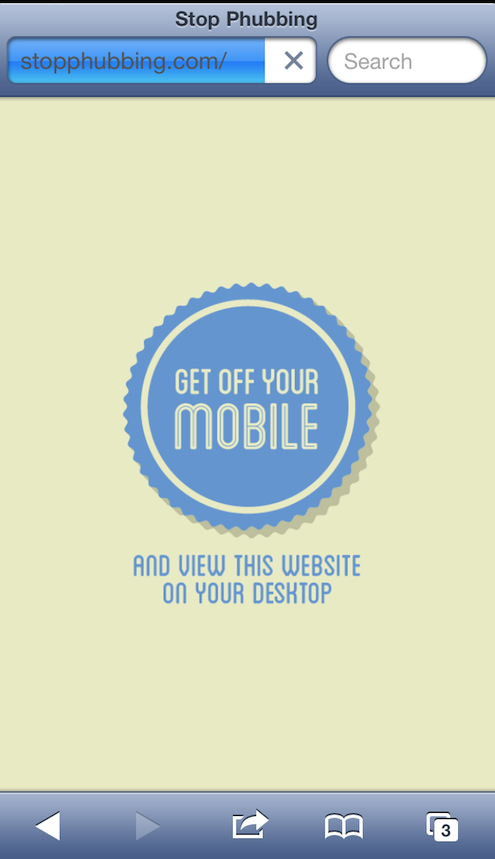 Not being able to continue onto the site from my phone ignited such a curiosity that I actually got off the couch to get my laptop.

The Stop Phubbing campaign actually encourages people to out serial phubbers by uploading their photo to the site, and in desperate cases, staging interventions.

Talking recently to Hughesy and Kate, Haigh says, “We’ve all experienced that moment – you’re out with some friends or whatever and then all of a sudden someone pulls out their phone and you’re less interesting than whatever’s on their screen.”

It seems that with every advance in technology and our phones becoming smarter and smarter, our social skills and relationships are suffering. We don’t communicate face-to-face because it’s easier to send a text or talk to people from behind a screen.

Pew Internet and American Life Project found 87 per cent of teenagers would rather have an SMS conversation than speak face-to-face.

A recent study undertaken by the University of Essex found that the mere presence of a mobile phone nearby during a face-to-face encounter inhibited the development of relationships.

According to Stop Phubbing, Australians are among the world’s worst phubbers with Sydney boasting more than 9 million offenders.

The ability to text friends at all hours of the day means we are constantly connected. So, despite not having regular face-to-face contact, we’re not missing out on social attention.

But as with many things in life, there is a time and place for everything.

So serial phubbers, take heed. You never know who will put you up on the Stop Phubbing Hall of Shame. 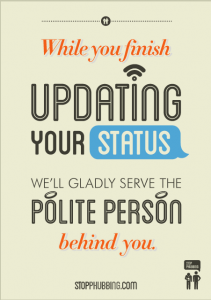 The next time you’re on your phone in a restaurant, while the waitress patiently waits for your attention, be respectful and turn your phone off. You might not be aware of how your actions affect the people around you, but you’re probably not getting a positive response.

If you believe phubbing is becoming a social problem, or if you know some phubbers who need to be taught a lesson, head to Stop Phubbing now to have your say. Or hop onto their Facebook page.