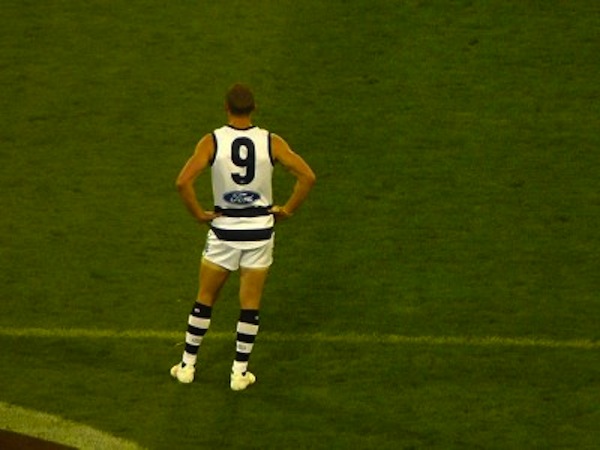 In years gone by, the bump has been viewed as the most intimidating feat of strength a player could perform on the football field.

While some fans still see it this way, confusion reigns over what is legal and what is not.

James Kelly’s bump on Brendon Goddard – which has been dissected within an inch of its life on various AFL programs this week – saw him punished with a two-week suspension for rough conduct. The bump was deemed to be reckless conduct, low impact and high contact.

But whether high contact occurred has been a point of contention. Initially, Goddard suggested he was not hit high when asked to give evidence at the tribunal hearing, but footage of the incident showed otherwise. The tribunal’s failure to overturn the ban led to a social media storm that has continued throughout the week.

@joelselwood14 I worked that out the hard way in Round 23 last year. Bloke got up took the free kick and I got 8 weeks down to 6.

However, not everyone was of the same view. Kevin Bartlett, former Richmond legend and member of the AFL’s Laws of the Game committee, defended the match review panel’s decision.

“Forget the hysterics; The bump is not dead. As long as you don’t hit players in the head, as Eddie Betts knows only too well,” said Bartlett.

“The facts are, Kelly hit Goddard in the head. As Judge Judy once said, don’t pee on my leg and tell me it’s raining.”

Adelaide coach Brenton Sanderson agreed with Bartlett, saying: “I don’t think it’s dead but they’re trying to remove the unnecessary injuries from footy – the collision injuries which they could potentially avoid.” 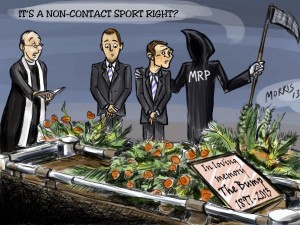 The match review panel has made it clear any rough contact to the head will be punished. Players can still bump but the risks involved have become too great.

As Collingwood coach Nathan Buckley said recently, “there is just too much risk in it… just don’t bump, that is the safest way.”

Players often have only a split second to decide whether or not to bump; it’s not long enough to accurately assess how the contact will occur.

There is no way of knowing if an opponent will turn at the last second, and bring about high contact.

This is ultimately what cost Kelly two weeks on the sidelines. Brendon Goddard’s last-second turn altered what would have been a shoulder-to-shoulder clash, instead it became a bump to the chin.

Earlier on Friday night, Geelong’s Taylor Hunt had his collarbone broken after receiving a bump from Essendon’s Jake Melksham. The incident didn’t result in a free kick, let alone a report, because Melksham made contact to Hunt’s shoulder.

Evidently, players can still land a bump and not be suspended. Having said that, if Hunt had turned his body just a few degrees, Melksham might have found himself in a similar predicament to James Kelly, through no real fault of his own.

While the hip-and-shoulder hasn’t been outlawed just yet, the risks of bumping now outweigh the rewards, meaning we’ll see fewer bumps as time goes by.

The bump isn’t dead just yet, but it won’t survive much longer.