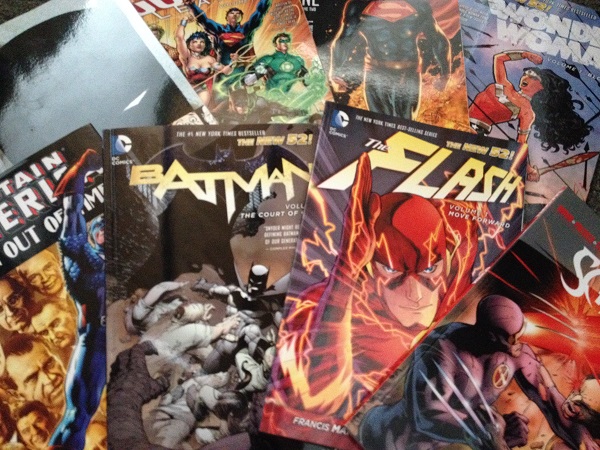 With the upcoming release of Avengers: Age of Ultron, comic book-based films have never been more prevalent or popular.

This popularity extends to television. Three out of the ten most pirated television shows of 2014 were based on comic books.

upstart spoke with Mitch Davies, co-owner of All Star Comics Melbourne, to find out how the popularity of comic book adaptations is translating to their source material.

“It varies greatly from property to property,” he says. “For example, a character like the Flash for DC hasn’t had a lot of exposure in other media outside the comics, so people are interested to find out more about him.”

The Flash premiered in the US last September and has been received positively. Its Australian premiere was Foxtel’s most watched program of the night by a wide margin.

“Compare that to when the second Amazing Spider-Man film came out. There were four Spider-Man related films before it. That is a property that people seem now happier to view just as a film and don’t feel the need to find out more about,” Davies says.

“Compare that again to Captain America: The Winter Soldier or X-Men: Days of Future Past – films that are strongly based around a certain and collected story line. People are keen to find out more about that single story. So we see a spike in those particular stories collections but not the entire line in general.”

However, the interest generated by film and TV adaptation is not long-lasting.

“There never seems to be a long-term increase in the individual properties themselves,” Davies says. “One exception to this rule is The Walking Dead, as it has remained a strong and consistent seller the entire time the TV series has been running.”

So, if live action adaptations are not resulting in long-term increases to sales, how else are publishers trying to appeal to new readers?

Both major companies, DC Comics and Marvel, have recently relaunched or rebranded their books to appeal to new readers.

“DC’s The New 52 helped create a lot of interest in the company and line in general,” Davies says. “We saw massive jumps in orders for the first six months of that relaunch happening.”

“Marvel’s “soft” relaunches have also done well. But they were more a relabelling rather than a starting from scratch, like DC, and it was rolled out over months rather than all at the same time,” Davies says. “It has never matched the DC event.”

Marvel has also attempted to have its books emulate its live-action counterparts. One example is the character Nick Fury being replaced by his African American son due to the recognisability of Samuel L. Jackson in the role.

Another potential threat to comic sales has appeared online. Like all forms of media, comic books are frequently and easily pirated. Comic books appear frequently in the most torrented books list on Kickass Torrents’ website.

Despite this, Davies does not believe piracy is harming the industry and may even be helping it.

“In the four years we’ve been open and the 12 years before that working in the industry, we’ve haven’t seen it affect sales too badly,” he says.

“If anything these new formats of people accessing the medium helps create interest in the print copies. We find people might try a title through downloading or buying digitally, then really enjoy it and feel the need to own an actual copy of it.”

Although comic book-based films may only provide short-term sales boosts to individual series, their increased popularity combined with greater accessibility has led to increased interest in the medium and acceptance by mainstream audiences.

“We’ll continue to do our best to introduce as many people as possible to the world of comics.”