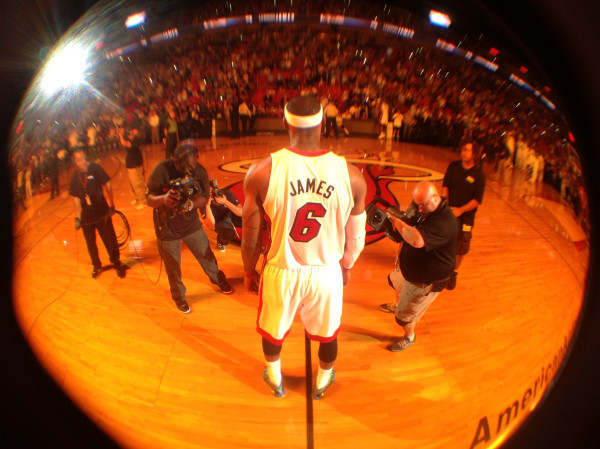 The Miami Heat and Oklahoma City Thunder have led their respective conferences this season, and are expected by many to compete for this season’s championship.

Miami started this season slowly, before going on an incredible 27 game win streak – the second longest win streak in NBA history – in the second half of the season. Superstar LeBron James will once again lead the Heat in their quest for back-to-back titles.

James – who is favoured to win the NBA’s Most Valuable Player award again this season – has set career highs in shooting percentages from the field and the three point line. He is driven by the enormous expectations that come with being arguably the best player in the league. Multiple championships are expected of him. James knows that better than most on the eve of the playoffs.

Oklahoma City overcame the loss of star James Harden shortly before the season and recovered swiftly to top the Western Conference. Kevin Martin has done a reasonable job in replacing Harden, and will help the Thunder’s stars Kevin Durant and Russell Westbrook as they look to take the next step towards a championship.

Much like LeBron, Kevin Durant will know exactly what is expected of him and his team after losing to the Heat in last season’s NBA Finals. After falling just short of the Larry O’Brien trophy last season, anything other than a championship will be seen as a disappointment for the Thunder.

The task will not be any easier for the Thunder than it was this time a year ago, with the Heat’s roster looking stronger than ever this season.

Former Thunder guard James Harden will soon get the chance to show his former team what they are missing. His Houston Rockets battle Oklahoma City in the first round of the playoffs, in what is sure to be one of the most talked about storylines of the first round.

Elsewhere in the Western playoff race, the Los Angeles Lakers recovered well from the loss of Kobe Bryant just days before the end of the season to a serious Achilles injury, finishing seventh. The Lakers will play the veteran San Antonio Spurs in another star-studded match up.

Damn man i feel bad for @kobebryant . If there's anybody and i mean anybody who can come back from that injury it would be him! Best wishes!

The Lakers and Spurs have been the dominant teams of the 21st century so far, winning nine championships between them in the last 14 years. The Bryant-less Lakers will go in as underdogs, but the Spurs will know this could be the last time some of their veteran stars can compete for a championship. Future hall of famer Tim Duncan is 36 and Manu Ginobili is 35.

The first round of the Eastern Conference playoffs features two long-term rivals facing off, with the New York Knicks hosting the Boston Celtics. This season’s scoring champion Carmelo Anthony will battle fellow star Paul Pierce at small forward, in what should be one of the best duels of the post-season.

New York finished second in the Eastern Conference, but ended the season 12 wins behind Miami. Boston has struggled with injuries throughout the 2012-13 season, with Paul Pierce and Kevin Garnett missing games leading into the playoffs, and star guard Rajon Rondo being ruled out for the season with an ACL tear. They will need to find form fast or they may face a first round exit – something the Celtics haven’t been familiar with in the last decade.

The Milwaukee Bucks – the only team in the playoffs with a losing record – face the unenviable task of playing the all-conquering Miami Heat in the first round. It is hard to envision anything other than a 4-0 series sweep in this matchup, with Milwaukee outmatched at almost every position.

Miami and Oklahoma City will again start the playoffs as favourites. The potential rematch of LeBron James and Kevin Durant is a mouth-watering prospect.