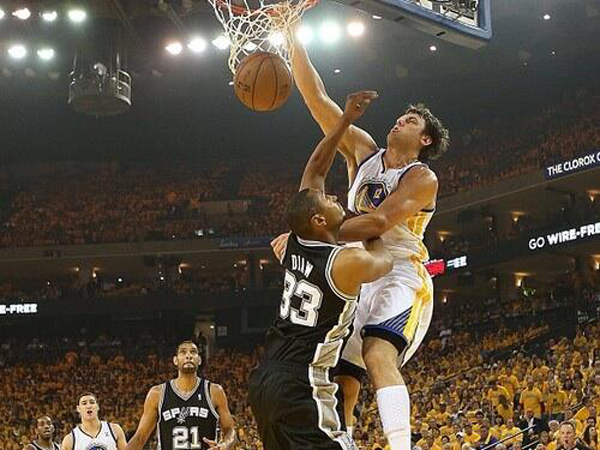 The Spurs were 26 seconds and a Hail Mary three pointer away from winning yet another NBA Championship last season. Arguably the better team for much of the finals series, the quietly spoken ‘Big Three’ may be approaching their twilight years, but there is no doubt that the quality of the Spurs team still remains unquestionable.

Marco Belinelli will take a lot of scoring pressure off Manu Ginobli if he can fit into the Spurs system.

The Thunder sorely missed Russell Westbrook, as it inexplicably crumbled against Memphis in the conference semi-finals. With its all-star point guard set to miss the first month of the season, expect Kevin Durant and OKC to start slowly.

Jeremy Lamb will need to be a required scorer off the bench if OKC is to remain a legitimate threat to contend.

The Clips acquisition of Doc Rivers is undoubtedly an upgrade on Vinny Del Negro. The Clippers have also found some much needed help for Jamal Crawford with J.J Redick providing shooting depth to the roster.

Jared Dudley will be more than capable of filling the void that Lamar Odom leaves. He will be a likely starter with both Odom and Caron Butler gone.

The Warriors turned heads in 2012 with Stephen Curry’s shooting display taking the league by storm. Curry’s partnership with sharpshooter Klay Thompson is the key to this team. A legitimate contender if all can stay healthy.

The addition of all-star Andre Iguodala to the Warriors roster puts them in contention for a high seeding in the West.

After their most active off-season in a long time, the Rockets will be under the microscope from the outset after securing the services of Dwight Howard. Paired with James Harden, the duo will pack a lethal one-two punch on the offence, although talks of a modern day Shaquille O’Neal/Kobe Bryant partnership may be premature.

Howard’s signing overshadowed the arrival of Omri Casspi, who will fit in perfectly with coach Kevin McHale’s ‘small-ball’ style.

As last year’s conference, finalists the Grizzlies performed admirably but were swept away by the Spurs. They were able to capitalise on a weak OKC side and will be setting themselves for another assault on the Western Conference big guns. However, without an out-and-out superstar like many of the other teams, the Grizzlies may have over-achieved last season.

Kosta Koufus will give both Marc Gasol and Zach Randolph valuable minutes off the bench after crossing over from Denver.

What noise can the Nuggets make in a highly competitive Western Conference? Knocked out in the first round of playoffs, the Nuggets lost Andre Iguodala to Golden State, which may set them back a fair way. The sacking of head coach George Karl could see the Nuggets scrambling to find their feet under the leadership of new coach Brian Shaw.

Nate Robinson is a great pick up to compliment the ageing Andre Miller.

The Timberwolves are blessed with enormous talent, but are often undone by horrendous luck. Injuries to key players Kevin Love and Ricky Rubio have curtailed their last two seasons – both of which had started so well. Along with Nikola Pekovic, Minnesota can definitely excite. Whether it can win enough games is another issue though.

Kevin Martin’s third team in three years, Minnesota may be his best fit. Starting in a team where he doesn’t have the pressure of being a primary scorer will suit him best.

The Trail Blazers have finally acquired what they’ve needed in the last three seasons – some depth on their bench. Suddenly Portland are no longer a three-man team. Thomas Robinson, Earl Watson and Dorrell Wright will still all need to play a big role in trying to sneak Portland back into the playoffs.

Thomas Robinson will probably receive more minutes this season than he saw at Sacramento and Houston combined, and a glimpse of his enormous potential may finally be unearthed.

A youthful bunch, the newly named Pelicans should be a team to watch. Jrue Holiday and Tyreke Evans will be a fantastic fit alongside Anthony Davis in the seasons to come, and although they are a little shallow in their frontcourt with the departure of Robin Lopez, this team is going places.

Austin Rivers struggled with his perimeter shooting last season, but his ability to get to the hole at will is impressive.

It’s been less than three years since Dallas won the Championship and here it is struggling to sneak into a playoff spot. By no means a bad team, the Mavs will have their moments during the season, but with an ageing Dirk Nowitzki and a brand new backcourt – it may become messy at times.

Monta Ellis could go either way. Having been a misfit for two franchises already, he’s a big risk for owner Mark Cuban.

It’s incredibly unusual seeing the Lakers this low. With Dwight Howard’s departure and Kobe Bryant’s injury, it could be a very long season for the purple and gold, even if the silver lining happens to be Andrew Wiggins come draft day. It’s clear that the franchise has one eye on the future, with a star-studded free agent list and a draft class to behold come seasons end.

At this point in time, it’s questionable as to whether any of the Lakers’ free agency signings will be diamonds in the rough. Chris Kaman will be handy in replacing Howard, and Nick Young should fill Bryant’s shoes for now.

The Jazz’s roster reeks of a case of “who’s that?”

Utah got rid of its two low post forces: Al Jefferson and Paul Millsap – a move that signalled a new beginning for the franchise. It will be a rough ride for the time being. The Jazz’s only notable in is Derrick Favors.

Gordon Hayward will be asked to shoulder a lot of the offensive workload now, with Millsap and Jefferson gone.

The Kings have suffered at the hands of the Pacific Division for a long time, and this season seems no different. With star swingman Tyreke Evans gone much lies at the feet of the enigmatic DeMarcus Cousins. The signing of Greivis Vasquez will help, but otherwise it is slim pickings for Sacramento.

The Suns have timed their run to the bottom of the standings perfectly. The Suns record of 25-57 was their second worst since their inception in 1968, and was also the catalyst for the sacking of much of their coaching staff. The silver lining is that if they replicate last season’s performances, that number one draft pick may very well be Phoenix’s.

Super-athletic guard Eric Bledsoe will finally get his chance as a starter, after years of playing second fiddle to Chris Paul at the Clips.

Kevin Cheong is a third year Bachelor of Journalism student at La Trobe University. You can follow him on Twitter at @cheongas.