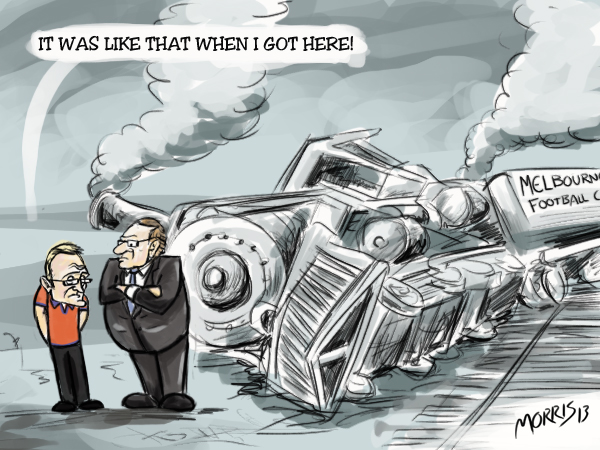 Melbourne coach Mark Neeld remains in the top job after a board meeting was called to address the club’s dismal on-field performance in 2013.

Pressure on Neeld has been ever mounting and speculation was rife that he would be facing the axe after a 1-9 start to the season.

However, there is no indication Neeld is set to see out his contract: Melbourne president Don McLardy said in a statement released yesterday that no positions are currently guaranteed.

“Our on-field performances have not met expectations this year and everyone in the football department continues to face ongoing assessment in their roles, as do those employed in other areas of the club,” he said.

“The club will make no further comment at this time in relation to the senior coach position.”

Yesterday’s board meeting addressed the club’s direction after a 95-point loss to  Hawthorn, extending Melbourne’s losing streak to six games.

Journalist Damien Barrett was one of many prominent figures to speculate that Neeld’s career at Melbourne would end, but the decision — or the announcement — will wait until at least next week.

Neeld replaced an embattled Dean Bailey as coach late in 2011 after Melbourne suffered the second-worst defeat in VFL/AFL history – losing to Geelong by 186 points. During his time at the Demons, Bailey managed just 22 wins from 83 games.

Neeld signed a three-year contract and showed promise in the NAB Cup of 2012, but the flicker of hope soon diminished and the Demons won just four games in the regular season.

His contract would have carried him to the end of next year, but he has been under immense pressure following a stint of losses, with an average losing margin of over 76 points.

There was some good news for Melbourne yesterday, but it was eclipsed by speculation regarding Neeld’s position.

“We are extremely pleased to announce today that following the Board’s request to Peter Jackson to extend his tenure as CEO beyond the initial 6 month contract, he has agreed to stay in the role of CEO until at least the end of 2014,” McLardy said.

In a pre-match president’s address on Sunday, McLardy had hinted that changes would occur in coming weeks.

“Our club is on a hard road at the moment. That’s clear to everybody,” he said.

“I can assure you we are working very closely with CEO Peter Jackson to effect a turnaround as soon as possible. You can expect to hear the first steps in that process over the next couple of weeks.”

While short, Neeld’s tenure bears resemblance to Bailey’s – a period of sympathy replaced by accountability that now leaves Melbourne with five wins from their last 32 games.

The Demons will face the Magpies next Monday, a side they haven’t beaten since round 11 in 2007.

The fixture doesn’t get any easier after the annual Queens Birthday clash. They will have some hope against the struggling Saints and Bulldogs, before facing likely defeats at the hands of Sydney and Geelong.

The next month will be telling in who can prove their worth to the club and keep their spot, and who will move on in the name of progression and improvement.

The board meeting on Monday went for much longer than usual, and Neeld dodged the press between the meeting and returning to his office at AAMI Park. The public was holding its collective breath as rumours and unconfirmed reports circled on Twitter, before the ABC incorrectly broke a story that Neeld had been sacked.

The resulting confusion aptly resembled the tumultuous times at the Melbourne Football Club, and the cloud of uncertainty still surrounding its senior staff.

Meanwhile, others found humour in the calamity.

For now, the week ahead will prove just another chapter in the ongoing saga of the deflated Demons.

Andrew Miller is a third-year Sport Journalism student at La Trobe University. You can follow him on Twitter at @AndrewTPMiller.