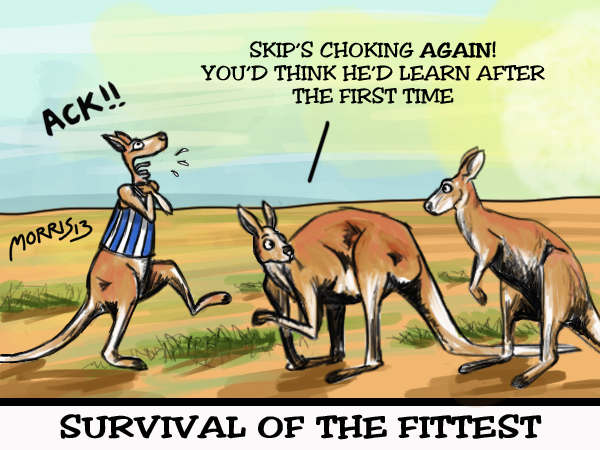 North Melbourne’s inability to maintain a lead and hold off surging opponents late in matches has been widely discussed in 2013.

The ‘diabolical’ issue reared its ugly head once again on Sunday, with Adelaide storming back from five goals down midway through the final quarter to snatch an incredible victory – the fourth time North has lost by under one goal in the opening nine rounds.

It’s become a reccurring nightmare for Brad Scott’s men. The Kangaroos have led Hawthorn, Geelong, West Coast and Adelaide by notable margins for significant periods, only to relinquish momentum and the ascendency on each occasion.

Despite being in front for 68 per cent of their gametime – the second best record behind the Hawks – the Roos are 11th on the ladder, with three wins and six losses, and in serious danger of missing out on September action.

The tension evident in the dying stages can be traced back to 2012 too. North Melbourne lost three games by two points against Essendon, West Coast and Port Adelaide. The latter was in a similar mould to the Crows debacle, where North held a 32-point advantage in the final term but were remarkably overrun by the lowly Power.

The “chokers” tag is a painful burden to carry, and North has unfortunately earned it over the past two years. Yet, as football supporters and media, it’s easy to become hysterical in this scenario. Realistically, it isn’t all doom and gloom for the Kangaroos.

Not that long ago, North was regarded as a middle-tier side who were completely incapable of going pound for pound with AFL powerhouses. In 2011, minor premiers Collingwood smashed the Kangaroos by 204 points across two fixtures, while premiers Geelong won the round seven clash by 66 points.

The Roos have certainly developed since then, and possess genuine elite weapons – Lindsay Thomas, Scott Thompson, Todd Goldstein, Daniel Wells and Andrew Swallow to name a few. They are not only mixing it with the cream of the AFL crop, they are often outplaying them.

Serious, game-deciding mistakes have been made by North players at crucial times this season, and the team has consequently paid the price.

Shaun Atley’s decision to attack a pack aerially rather than stay down with direct opponent Jared Petrenko, who went on to kick Adelaide’s decisive goal, was critical. The same can be said for experienced campaigner Michael Firrito, who ventured up to the wing in the final seconds rather than protecting the goal-mouth. Both incidents were highlighted on FoxFooty post-match.

Poor structure late in matches, dangerous space afforded to opposition forwards and a lack of composure with and without the ball are major concerns.

They are issues North Melbourne can control. Therefore, they can alter those elements quickly.

Mental scars, on the other hand, will linger.

Until the Kangaroos prove to themselves and hungry opponents that they can handle pressure in a tight match, they will struggle to mount a legitimate finals or premiership assault. But don’t be fooled, they aren’t far away.