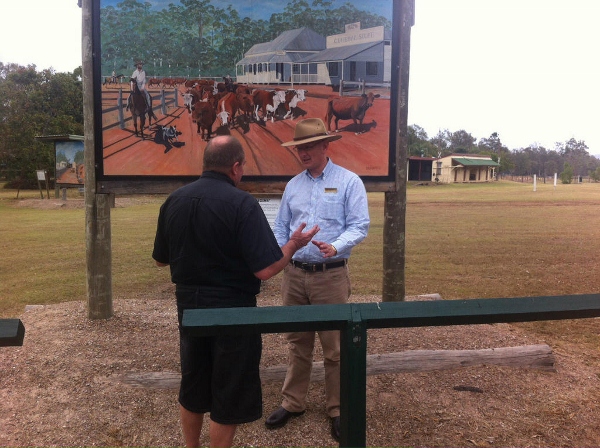 While many members of the Australian Labor Party are battling just to keep their seats in the upcoming election, Federal Member for Blair Shayne Neumann has been packing punches – not just in the gym.

His ambitions in health reform are a contributing factor to his recent success, which follow in the footsteps of his political hero and mentor, Bill Hayden.

Neumann says: “He was my local member and he did a lot of good things. He brought in Medicare, which meant that people got some decency in terms of medical treatment, so he was a great reformer. He believed in a strong economy but also a fairer society.”

Neumann was the first member of his family to attend university, completing a Bachelor of Law and an Arts degree majoring in government and economics at the University of Queensland. Following this, he pursued a 20-year career as a lawyer.

Neumann says that his strong Labor roots stem from this achievement, with his belief that “it was the Whitlam government that reformed higher education that allowed me to attend university”.

Since his election to office in 2007, Neumann has strongly advocated for improvements in healthcare facilities. He has formerly served on the West Moreton District Health Council, was a Board Member of Queensland Baptist Care and has chaired Health Reference groups in the electorate of Blair.

While Neumann has the support of the health and ageing organisations around the electorate of Blair and evidently, the Government itself, others aren’t convinced. Ex Family First candidate, and opposition to Neumann in the 2010 election, Joshua Olyslagers, fears that the unsettled Labor party is impacting on Neumann’s ability to deliver his core principles.

“Health care and education are the big ticket items in our area and while I believe Mr Neumann, as with all MPs, is there to give his best, unfortunately he represents a political ideology from ALP leadership that has disenchanted much of the electorate,” Olyslagers says.

Olyslager’s concerns may have some merit according to The Australian who say that the Labor party are preparing Neumann for a transfer to a state seat in light of a potential defeat at the election later this year. However, the MP says his focus remains on the electorate of Blair.

“There are no plans, plots or proposals for me to run in any seat other than the seat of Blair at the next election,” he says.

Despite Neumann’s confident demeanour, past election results indicate that his seat is far from guaranteed.

The redistribution of 28,000 conservative voters to the new seat of Wright aided Neumann in overcoming his defeat to Cameron Thompson at the 2004 election, although the past two election results do indicate a decreasing trend in Neumann’s popularity.

Politics aside, it is not just the health of his electorate that Neumann is concerned with either. A regular fun run participant, Neumann ensures he makes time to keep himself fit and healthy, admitting he is somewhat of a gym junkie.

In response to a call in 2010 from Opposition leader Tony Abbott to find Australia’s fittest politician, Neumann claimed he would ‘own’ Mr Abbott.

“I have come across Tony many times in the gym, and when it comes to strength he could not compete against me,” Neumann tells The Queensland Times, adding sheepishly that: “In a cycle or swim he would beat me though; they’re my weakest legs.”

While the family man concedes that balancing his social life with his demanding workload is “pretty difficult”, he insists he still makes time for the things that are important to him.

“I’m a Christian by faith; I go to a Baptist church in Ipswich. I find that it’s spiritually defining and helpful to me on a personal basis and my faith is a moral compass for me, so that’s an important thing for me in my life.”

Evidently, the old saying ‘if you want something done, ask a busy man to do it’ certainly rings true for Neumann.

“I’m always on the scout and always on the urge for funding for our local community. We’re one of the fastest growing regions in Australia so we need better infrastructure, better hospitals and health facilities and making sure that’s done in a sustainable way, that doesn’t ruin the lifestyle and livelihoods of people.”

Like its MP, the electorate of Blair is, for now, in good shape and that despite an expected level of criticism, it can be said that Neumann is indeed ‘delivering for Blair’.