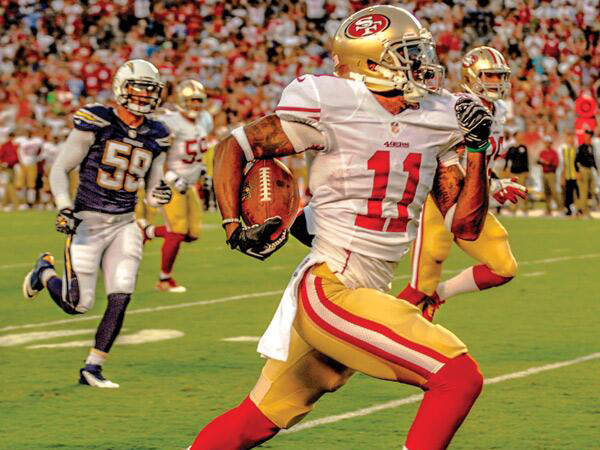 At first glance, there are four genuine contenders that jump out – San Francisco, Seattle, Atlanta and Green Bay.

Then there are the sleepers, like St Louis and Washington. The Eli Manning-led Giants. The Tampa Bay Buccaneers, with their Frankenstein-like defence.

The NFC really is anybody’s game, and upstart has a definitive preview of the conference, right here.

Last season saw an incredibly even performance come from the NFC North. Three of the four teams finished with more than 10 wins, and two made the playoffs. Green Bay outlasted Minnesota and then promptly got smacked by the 49ers in San Francisco. The Packers will be aiming to improve this year, adding Alabama graduate Eddie Lacy to a run game that has been starved of opportunities. Aaron Rodgers will be Aaron Rodgers for another season – he’s the best quarterback in the league for a reason.

The Vikings boast the best player in the NFL, Adrian Peterson. He’s the reason they can make the playoffs. Peterson has been extremely vocal in predicting a record-breaking rushing yards season for himself, and a lot of people wouldn’t bet against him. A defence led by exciting youngster Harrison Smith should give Vikings fans cause for celebration, as another winning season looms. However, quarterback Christian Ponder will need to improve.

Chicago comes into this season with a new head coach (Marc Trestman) and without stalwart defender Brian Urlacher. Jay Cutler returns at quarterback, with weapons like Brandon Marshall (fresh off a franchise-record receiving season) and second-year pro Alshon Jeffrey to throw to. Matt Forte will feature heavily in the run game. On the other side of the ball, Lance Briggs, Julius Peppers and Charles Tillman are an imposing trio for any offence to come up against. They may, however, miss out on the playoffs due to the relative strength of the NFC North.

The Detroit Lions will also be hoping for a winning season. Coming off the back of an unimaginably bad season last year, the Lions offence is now a three pronged attack, with Matthew Stafford leading from the front at QB, Calvin Johnson starring at wide receiver and Reggie Bush taking the majority of the snaps from the running back position.

Nick Fairley and Ndamukong Suh stand out in defence, but look out for rookie Ziggy Ansah to make an impact when he returns from a concussion.

The Atlanta Falcons and Matt Ryan cruised through the division last year, before coming up agonisingly short against the 49ers in the NFC Championship, after letting a 17-point lead slip. In response, Atlanta went out and improved its secondary, snaring cornerback Desmond Trufant, who should have an immediate impact. Ryan still has his receiving ace Julio Jones to throw to, and tight end Tony Gonzalez returns for yet another season. It should win the division, but Carolina are a huge threat.

Forget QB Cam Newton. He’s good, of course, but there’s a player on Carolina’s defence who’s better. It is, of course, Luke Kuechly, the defensive rookie of the year, for the 2012 season. He looks to be one of the most talented in the entire league, not just the NFC. And sure, Cam Newton is pretty good too, and might take off this year. Early draft pick Star Lotulelei also adds another extra something to the defence.

Next up, the New Orleans Saints. We won’t bore you with the details of Bountygate, but the Saints return with head coach Sean Payton, reinstated, after a league-imposed year-long suspension. The Saints gave up an NFL-record 7,042 yards last season. They improved their paper-thin defence, adding safety Kenny Vaccaro and new defensive coordinator Rob Ryan. Of course, any winning record will rely on Drew Brees throwing himself into the record books again, and somehow, it’s hard to see that happening.

Finally in the NFC South, the Tampa Bay Buccaneers. It spent up big on its defence, acquiring monstrous safety Dashon Goldson and cornerback Darrelle Revis, a top-10 player at his peak. Young running back Doug Martin goes about his business and stacks up huge numbers, but quarterback Josh Freeman is wildly inconsistent. A season for the team to gel together around Goldson and Revis is needed, so playoffs – at least for this year – are surely out of the question.

The Washington Redskins won the NFC East last year largely off the back of phenomenal rookie Robert Griffin III. RGIII will come into this year with next-to-no preseason, after undergoing an ACL reconstruction in the off-season. Still, you can expect an unbelievable performance from the second year pro – and in arguably the NFC’s weakest division, it should be enough to see the Redskins to the playoffs again. Running back Alfred Morris is one to watch and has been tipped to have a huge season.

You can never count the New York Giants out. Eli Manning has more than earned the right to step out of his older brother Peyton’s shadow, with two Superbowl rings of his own. As long as wide receiver Victor Cruz is healthy, the Giants have a shot at the playoffs. Jason Pierre-Paul is among the top handful of defensive ends in the NFL, and anchors the Giants defensive line. He’s extremely dangerous when he rushes the passer, and his presence will draw multiple defenders, opening the line up for others. A wildcard spot is a maybe for the Giants.

Standing in their way are the Dallas Cowboys. Tony Romo finally has a healthy, fit Dez Bryant to throw to, and there’s no ceiling on what Bryant can accomplish. They drafted a centre (Travis Fredericks) to aid their ailing defensive line, which should give Romo more time to throw. On defence, Sean Lee will hope to avoid any significant injuries – the linebacker is a wonderful player when on song and healthy. With some luck, the Cowboys could edge the Giants for a wildcard position.

Philadelphia has been re-invented by ex-Oregon coach Chip Kelly. A faster offence, which relies heavily on running the football, will make the Eagles fun to watch if nothing else. Their quarterback, Mike Vick, runs it almost as well as their best running back, LeSean McCoy. They won’t make the playoffs, but they’ll be entertaining to watch.

No longer is the NFC West an afterthought. It’s the strongest division in football, AFC or NFC. San Francisco was champion last year, and came agonisingly close to the Superbowl. Colin Kaepernick is a multi-threat QB, and the run game is as strong as ever, in the capable hands of Frank Gore. Its defence is arguably the best in football. However, San Francisco’s weakness lies with its wide receivers, where injury has struck. New signings Anquan Boldin and Marlon Moore will shoulder the load.

It’s an arms race between the 49ers and the Seattle Seahawks. Not content with their playoffs run last year, the Seahawks went and got offensive weapon Percy Harvin, who suffered injury. Not a problem – the Seahawks have superhuman running back Marshawn Lynch, and a stacked secondary led by Richard Sherman and Brandon Browner. Both teams have to make the playoffs. One of them will be a wildcard – it’s almost a certainty.

The St Louis Rams have been continually improving. They finally went and got QB Sam Bradford some weapons, and what a gun they found in Tavon Austin. The rookie out of West Virginia is easily the most explosive player from this year’s draft class, and could turn the Rams into a powerhouse in the next few years. It’s almost a shame that the Rams are in the NFC West, as they could cause havoc in the playoffs, were they to get there.

Poor old Arizona. The littlest brother of the NFC West, it does have a new coach, a new quarterback, and one of the best wide receivers in football in Larry Fitzgerald, but it’s difficult to imagine it as little more than a punching bag for the rest of the division this year.