The Nicholas Building Association is fighting to keep the structure in the right hands. 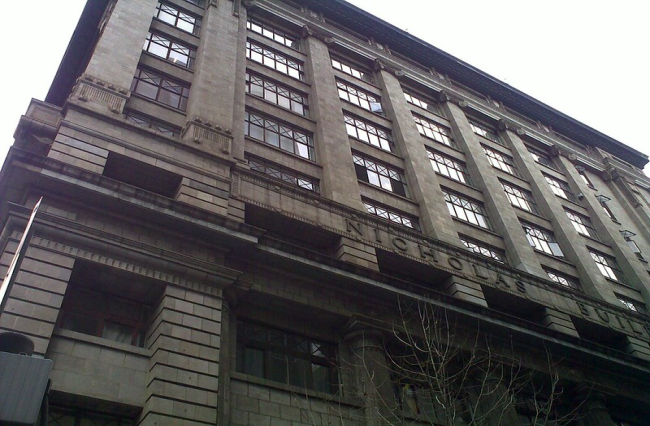 Melbourne’s Nicholas Building is known as being home to the city’s alternative arts culture. Among the structure’s grand columns and unusual terracotta tiles, resides a diverse group of artists, makers, designers and small artistic business traders. But the distinct community and ethos of the Nicholas Building are at risk with the heritage-listed building put up for sale in June.

The property, which was built in 1926, was previously owned by a group of wealthy Toorak families. The agents from Allard Shelton and Colliers International real estate overseeing the sale, say the premises could sell for more than $80 million.

Located on the corner of Flinders Lane and Swanston Street, and originally associated with the Flinders Lane garment trade, the landmark building is home to studios, offices and stores accommodating close to 100 small businesses including galleries, bookstores, boutiques and tattoo parlours.

“I’m fighting because I think that the culture of the building contributes to the economy in the city and the state, in so many more ways than just directly,” she tells upstart.

“I also think that if we lose this community, there’s nothing else like it that’s going to be able to replace it and we won’t be able to build something like this from scratch.”

McIntosh believes it’s important to keep the building with owners who will continue its operation because the structure and its community represent many things that Melbourne and Victoria are known for.

An artist herself, McIntosh purchased her own studio inside the building in 2019. She emphasises the important role the building plays in acting as a stepping stone for the next generation of creatives.

“The building’s special because it’s still affordable, so it can support all of that activity,” she says.

McIntosh also says the building is incredibly rare because of its architectural features and location in the heart of Melbourne.

The Heritage Council of Victoria states that the Nicholas Building is a significant and outstanding example of the commercial palazzo of the 1920s and provides an excellent illustration of 1920s shop and office decoration. The dome and fanlights in the street-level arcade are reportedly the only remaining examples of lead-lighted roofed and fan-lighted arcades left in Melbourne. The building’s architect Harry Norris’ use of Wunderlich terracotta tiles to clad the facades is also of significance.

Tristan Hyde, the owner of Patch Attack, a store sited inside the building that specialises in embroidery and custom patches, has witnessed the building’s historic significance through its visitors’ eyes.

“[It’s] such a unique building, you get older people coming back. You also get a lot of out of towners [and] it’s a big drawcard for tourists to go through,” he tells upstart.

He also describes the community in the building as tight-knit.

“Everyone knows everyone. If not, everyone recognises the face and says hello to each other. When I used to work at Retro Star [inside the building], I used to see all the regulars come through,” he says.

With the building’s future subject to its buyer, tenants like Lucie McIntosh fear they may be asked to leave or face potential rising rent prices.

“It depends on who might buy the building. There’s been lots of speculation over the last couple of months. I suppose if a developer wants to buy it and turn it into a hotel, then the community will leave, they will have to leave,” she says.

“If a developer wants to buy it, fix it up and sell it on then that will raise the rents and then perhaps much of the community will also have to leave.”

The Nicholas Building Association have created a petition as a part of their Save the Nicholas Campaign asking for “government, philanthropy and, or private investors to buy the building as a protected cultural asset, keeping the creative community intact”.

McIntosh details how people can get involved to help support the cause.

“There’s the petition and there [are] our donations, which you can support the rest of the campaign [with]. We’re still kind of working towards modelling ways in which we might preserve the community,” she says.

Photo: Nicholas Building by Adrian F available HERE and used under a Creative Commons Attribution. The image has not been modified

Article: Jordan Janssen is a third-year Bachelor of Media and Communications (Journalism) student at La Trobe University. You can follow him on Twitter @JJordy1210