The North Melbourne mid-fielder is headed for her sixth AFLW pre-season. 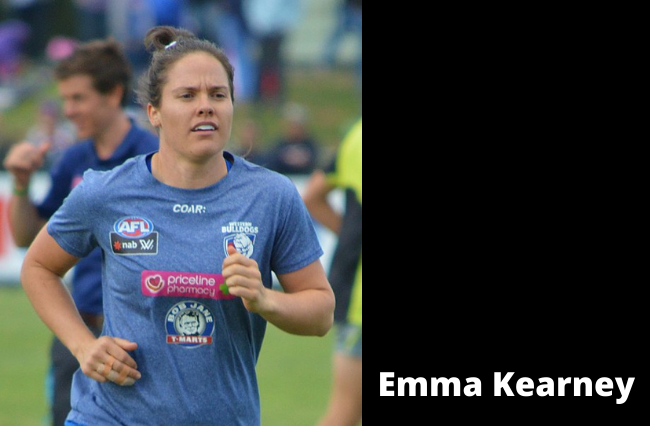 While these days it’s Emma Kearney’s AFLW opponents who are on the receiving end of the four-time All Australian’s competitive edge, it was her fellow sports-mad brother Josh who was first subjected to his sister’s white line fever.

Kearney remembers one backyard game back on the cattle station in Cavendish in western Victoria where she grew up. Her hunger to win may have gotten the better of her. The former Victorian Spirit cricketer’s extended run-up and her brother’s lack of protective equipment was a recipe for disaster, and Josh ended the match in tears after a cricket ball to the groin.

“I just could not get him out and, that was probably my only strategy,” she says with a grin.

Now, it’s her AFLW opponents who are on the receiving end of the four-time All Australian’s competitive edge these days. It is just weeks before the North Melbourne midfielder will begin her sixth AFLW pre-season she’s become one of the competition’s contemporary icons, which puts her in the limelight often in a football mad city.,

While might have been merciless tactics for a backyard cricket match, Kearney has always had to fight on the sporting field. Especially when she was young. As she became old enough to play competitive sport, there were no female cricket or football competitions. This meant the talented junior was often the sole girl in her sporting teams, a position that became tougher as she got older.

“When I was in primary school it felt normal. I was just part of it, but I think as you started to hit puberty and when I was playing cricket … with the boys, I just probably struggled to fit in I guess,” she says.

“It didn’t quite feel as normal as opposed to if I was playing in an all-girls side.”

Such was the lack of opportunity for girls throughout the 2000s that Kearney was barred from playing football once she hit 12 years old.

“I ended up hating the sport there for a while, just because I didn’t have the same opportunities my brothers and other boys my age had,” she says.

It wasn’t until she reached university that Kearney would rekindle her love for the game. Kearney entered the Victoria Women’s Football League (VWFL), playing for Melbourne University. This was during the peak of the competition, with other current AFLW stars such as Daisy Pearce and Moana Hope, leading the way for women’s football at the time.

At the same time that Kearney’s best-on-ground performances grew, so too was recognition of the potential for female football to become a national competition. The early 2010’s saw exhibition matches between trailblazing sides Melbourne and the Western Bulldogs, and by September 2016, the new AFLW and its inaugural eight sides was announced.

Kearney’s decision to come back to the game after not playing through her teenage years has had an even greater impact on her life than she could have imagined. Now, after five AFLW seasons, she stands as one of the most respected and successful figures in the league. But there have been many sacrifices along the way. In the same year the AFLW was established, the dual sportswoman was thriving as an opening bowler for the Melbourne Stars in the newly formed Women’s Big Bash League (WBBL). This left Kearney with a tough choice regarding her sporting future.

That decision wasn’t made any easier by Cricket Australia. The country’s governing body for cricket had developed a contract for multi-talented female athletes that stated players must make cricket a priority. They would have to give up their pursuit in other sports if they wanted to keep playing in the WBBL and other domestic competitions.

But with female cricketers not on a full-time contract and not earning enough money to disregard their other careers, Kearney knew dedicating her life to cricket wasn’t viable.

‘’I was of the opinion that I don’t actually want to sign this because you’re [Cricket Australia] not paying me enough to do it,” she says.

“If I was on a full-time wage then I’d probably be happy to sign it and understand it, but…I decided not to.”

After being asked by the ABC  to comment on the issue, Kearney answered as authentically as she could, something that left her media manager “not impressed”, she says. But while there was some initial guilt over the publicity her comments received and the discourse it created, Kearney was heavily supported by key figures in the industry and acknowledged for her courage in voicing the precarious position dual female sports stars in Australia were in.

“David Hussey, one of the male coaches at the time, he said, ‘what you said was really good and that’s a big reason why we can see change in the game’,” she says.

And all the while she was juggling the semi-professional football and cricket careers, she also had to make a living. But after completing her studies in physical education at university, she realised working full-time and playing two sports was just not possible if she wanted to reach her dream of playing AFLW. This meant that as of as of 2016, the physical education teacher could only teach during her off-season.

She also decided she would no longer play cricket. While Kearney had been a trailblazer for female cricketers, she knew it wasn’t her true love.

“I probably wasn’t as natural at cricket as I was at footy,” she says.

“Cricket was one of those games where it just created so much anxiety.”

Two AFLW teams, a premiership, and a league Best and Fairest later, and Kearney’s decision couldn’t have had a better outcome. Just as Josh found out during their childhood, Kearney’s sole ambition in any level of competition is to emerge victorious.

“There’s no better feeling than winning a game of sport,” she says.

As the current captain of North Melbourne and with the AFLW set to become a full 18 team competition in the coming years, Kearney doesn’t intend on slowing down any time soon. It’s the excitement surrounding the league’s expansion that leaves the 31-year-old hoping to play for many years to come. If her body holds up. She’s optimistic, though.

“I reckon the AFLW girls can play for a lot longer than the men’s [players],” she says.

“We’ll see how the body goes”.

And with a very empathetic shoulder to lean on, that will be made extremely possible. Kearney’s partner is St Kilda AFLW captain, Kate Shierlaw, who knows all about the physical and emotional demands of playing high level sport. The two like to spend their free time away from the game as much as they can, but during the week of a North Melbourne and St Kilda clash, Kearney’s competitive edge emerges once again.

“I’ve given her a few sledges here and there which she didn’t appreciate,” she says with that same grin.

It perfectly sums up one of the AFLW’s most esteemed players, who’s focussed on just one thing when she crosses that white line: winning.

Article: Riley Alexander is a first year Bachelor of Media and Communications [Sports Journalism] student at La Trobe University. You can follow him on twitter @Ralexander2002

Photo: ‘Emma Keaney warming up before an AFL Women’s match in February 2017’ [sic] by Tigerman2612 found HERE and used under a Creative Commons licence. Image has not been modified.