On Saturday morning Jovan Belcher, starting linebacker for the Kansas City Chiefs, murdered the mother of his child before driving to Arrowhead Stadium and committing suicide in front of his coach and general manager. 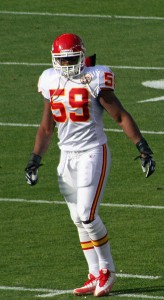 As the day progressed and more gory details emerged, predictably, the narrative turned towards football, specifically the Chiefs pending game against the Carolina Panthers that was less than 24 hours away. Sport is easy. It’s broken down in black and white with clear-cut winners and losers, box scores and statistics. So of course the seeming most pressing concern to emerge from the tragedy was whether the game should go ahead.

Paraphrasing Kansas City coach Romeo Crennel after his side was victorious on Sunday, they’re football players. This is what they do. And, in many ways, as fans it’s what we do. There’s a certain comfort to be found in such a straightforward pursuit, knowing that for those few hours we needn’t infer greater meaning or importance, give credence to underlying facets on display or mull over the real issues of the day.

And, in a spine-chillingly horrific state of dejà vu, the problem is once again firearms themselves. I can understand the immediate rush to focus on the sporting element of this event in an effort to avoid the sorely needed discussion, but the sad fact is that in the United States, a dual shooting is hardly something that could be considered a tragedy.

We hear incessantly about how rampant gun crime is in the United States, however we’ve also reached the point that such excessive exposure to the fact has numbed us to its horror. We see the tragic mass shootings, most recently in Aurora, and exasperatedly ask how such events can continue to occur. People pour over gun crime numbers, history books and anecdotal evidence in search of a rational explanation for the level of mindless killing that we see all too often. But, the reason they continuously occur is collectively staring us in the face. It happens because we allow it to happen.

Whenever a newsworthy shooting takes place, we are quick to rush to declare the perpetrator of such violence evil or monstrous, as a method to strip the shooter from any semblance of societal normality.

Therefore, whenever a shooting actually manages to force its way into the news cycle, the retort to any call for gun control is that guns make Americans safer in spite of a rising body count that suggests otherwise. We need guns to protect us from such heinous acts, and if we surrender our firearms, then only the proverbial bad guys will have them.

But, Jovan Belcher wasn’t a monster, but by all accounts, a good guy. Not one of the gangsters, drug dealers or criminals that supposedly guns protect innocent American folk. Clearly a man with his own issues and flaws, but seemingly the only people that needed protection from him were opposing running backs that took the field on Sundays.

The issue is that Belcher could so easily gain access a pistol, which served as the tool that allowed for a domestic dispute to escalate into an act of murder. If he can’t reach for that gun, chances are he doesn’t kill his partner on Saturday morning, and two families wouldn’t have been ruined by the crime and the couple’s two-month old daughter isn’t forced to grow up without her parents.  If there’s no gun in this equation, it’s safe to assume that this isn’t a discussion today.

However, despite the horrific scenes that unfolded over the weekend, the people of the United States continues to keep their head firmly planted in the ground in regards to the issue of gun control.

According to official figures released for 2010, twice as many victims are gunned down daily than were executed inside that Colorado movie theatre earlier this year.

Think about that for a moment.

The Aurora tragedy was presented as an event that resulted in an unfathomable amount of bloodshed.  But in reality, four times as many people have been killed since Belcher committed murder on Saturday.

How many people need be mercilessly killed at the hands of a gun before the message becomes clear?  That is, that guns do not make people safer. Instead, they provide the platform for perhaps the darkest facets of the human condition to rear its ugly head and strike out with devastating consequences.

Jovan Belcher’s murder-suicide isn’t a tragedy, it’s a nightly occurrence. An occurrence that wouldn’t eventuate if Belcher were not afforded the chance to acquire a firearm with such ease.

History will show that the Chiefs won this weekend, but you’d be hard pressed to find anyone within their locker room who felt that way.

The longer that the United States continues down their path of ignorance and self-destruction, the entire country will remain the perpetual loser.

Liam Quinn is a Bachelor of Journalism student at La Trobe University, currently on exchange at Michigan State University.  You can follow him on Twitter: @liamquinn23