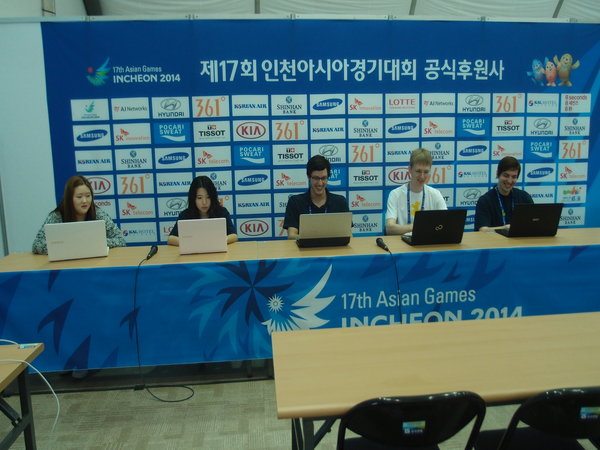 It’s hard to make comparisons when your career is so raw, but having the opportunity to be part of an international event was an experience that will be cherished and utilised for the remainder of my career.

I was lucky enough to be offered an onsite opportunity with the worldwide sports data and media company, Infostrada Sports. My role was to help with the research and updating of athlete biographies at the 2014 Asian Games, held in South Korea’s third-largest city, Incheon. 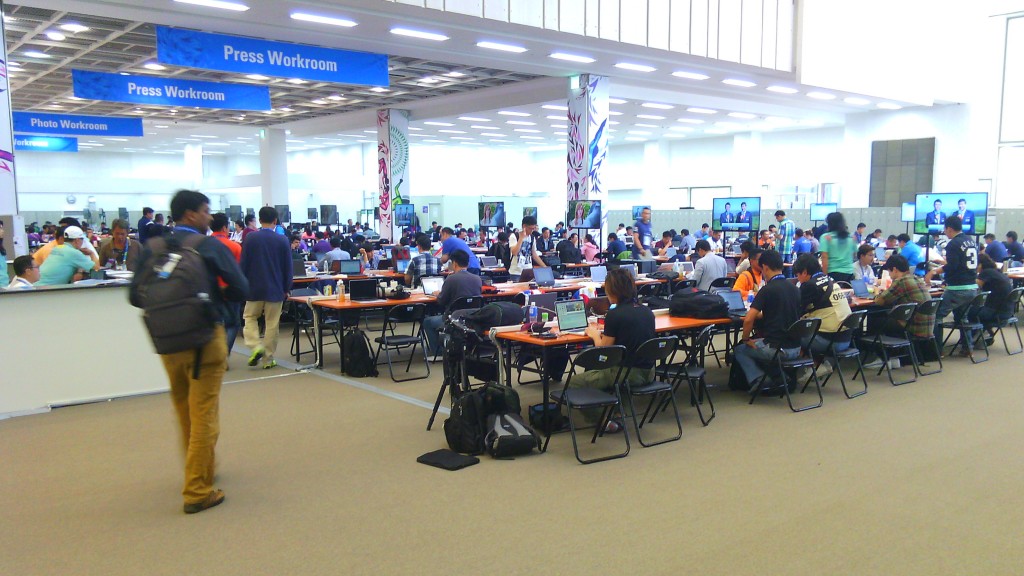 Inside the Main Press Centre at the 2014 Asian Games

From an athlete’s date of birth, to their superstitions and sporting philosophies, the only way journalists could gain unequivocal access to an athlete’s background was through us and the information we provided.

My 11 colleagues and I arrived three weeks before the Games began, armed with the responsibility of finding out every single little detail we could about each and every one of the 9,500 athletes competing.

Google Translate became our best friend as we were forced to research languages from the more obscure extremes, such as Burmese and Farsi, to the more customary, such as Korean and Chinese.

While I was working in close conjunction with media personnel from all over Asia and beyond, I didn’t write one article the whole trip.

Classed within the IT department, I was a middleman between the athletes and the media. Surprisingly enough, English was the Games’ primary language, and in order for the journalists to write an article in the universal language, they required information in English form. We were there to do the dirty work.

After the Games begun, our responsibility changed slightly. To gain a true insight into my role once the event had started, I wrote a ‘day in the life of’ recount.

Waking up to the heavy echoes of the pedestrian-filled Incheon streets, I could not let go of the sheer peculiarity of my situation.

Just like waking up from a heavy dream, I was often dominated by a sense of bewilderment and mystification about where I was and what I was doing.

Despite the initial anxiety, mornings were comfortable. A 10am start meant I could enjoy a mild sleep-in and a dose of Korean news, all of which I could not understand.

Getting to the Main Press Centre (our place of work) was difficult at the beginning given the group’s unfamiliarity of Korea’s public transport system, but language was our only barrier as the concept was just as simple, if not more simple than the Australian method.

All the uncertainty of the morning just passed vanished as I walked into the MPC. The atmosphere and activity within the facility provided the ultimate sense of belonging as hundreds of journalists were found rushing around from press conference room to office and back to press conference room, trying to make their strict deadlines. 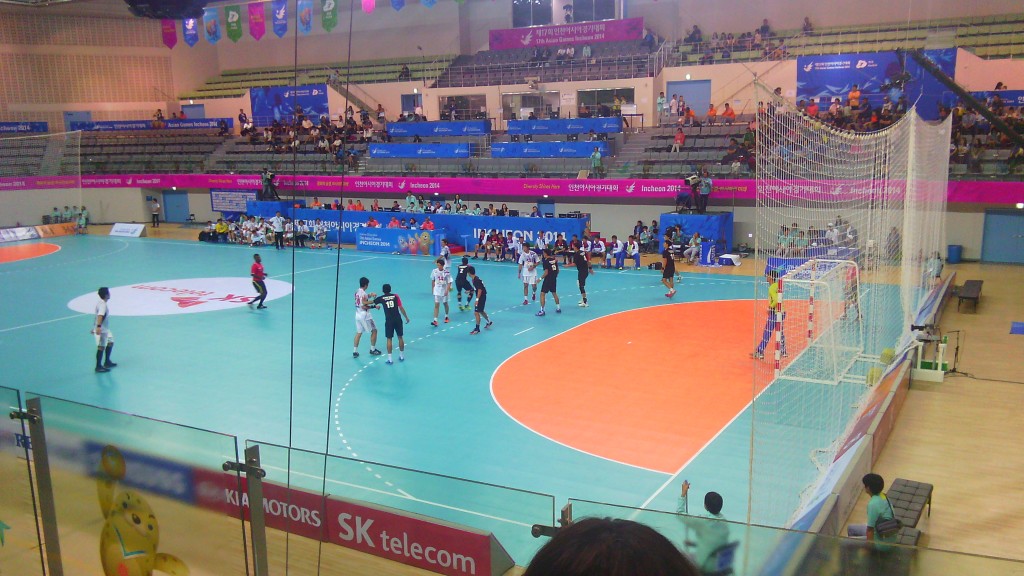 Chinese Taipei take on Japan in the Handball

We were lucky to have our own office, but most of the journalists were nomadic, taking up any desk vacancies available so they could get their work done in time.

Arriving at my desk, my first job was to scour the news with the aim of uncovering any loose ends – valid athlete information which had not yet been installed into the database. Athlete controversies and rule breaches were biography gold.

Once all valid sources had been covered, from the Gulf News to the Malaysian Star, my next resort was to confront the athlete for further information.

If access to their country’s Chef de Mission was denied, a valiant pursuit of their coaches would take place. If that quest was to no avail, the only option left was to meet with the athlete face to face; often the most common scenario.

Once access to the athlete had been achieved we would hand them what is called a biography form – a piece of paper imprinted with questions corresponding with the information database.

It was our most valuable asset as many of the athletes who had entered the Games with an absent record, could suddenly be detailed head to toe.

After politely explaining who we were and what we were doing, many of the athletes agreed to our request. Some of the forms would never be seen again but many came back within a few days.

There was always a sense of achievement when a bio form of your own creation would be returned. Forms returned from minnow countries, such as Brunei or Lebanon, would always produce an even greater sense of fulfilment. 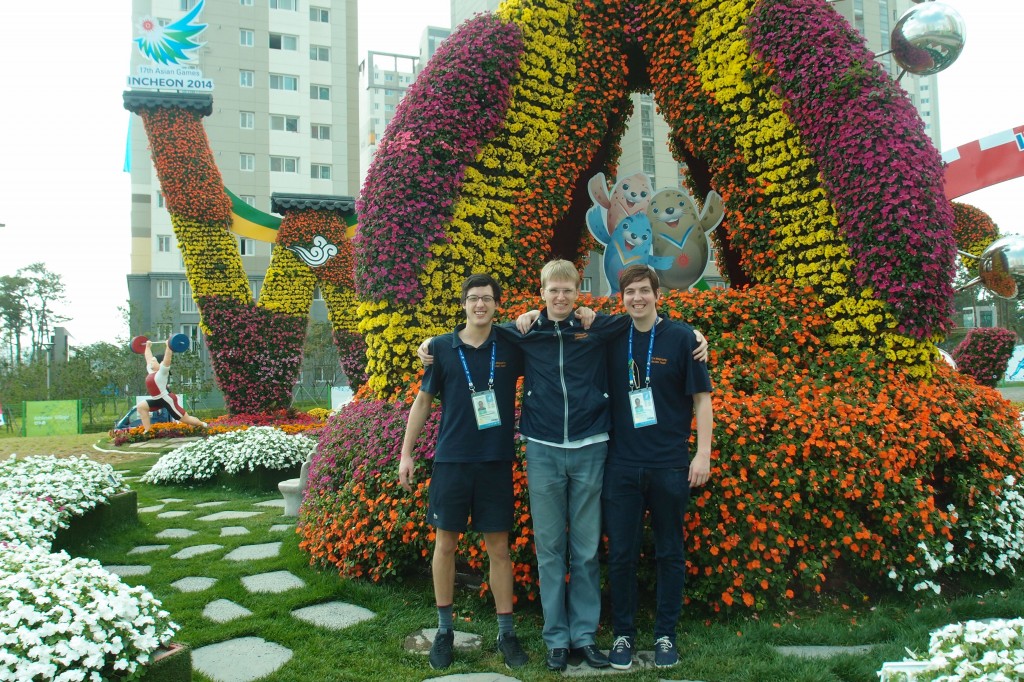 The athlete’s information would then need to be installed into the system. A process beginning at the researcher (myself) to the sub-editor before eventually making its way onto both the Asiad website and media information database.

Once the cycle had been completed, another day would near its end. The same cycle would be repeated day after day until no more information was available.

If a repetitive work rhythm is not your thing, this may not be your thing, but with the 2016 Olympic Games looming, starting your research with Infostrada now could land you a job in Rio de Janeiro.

Infostrada Sports is always looking for more freelance biographical researchers. If you are interested in getting involved, have a look at their website: http://www.infostradasports.com/