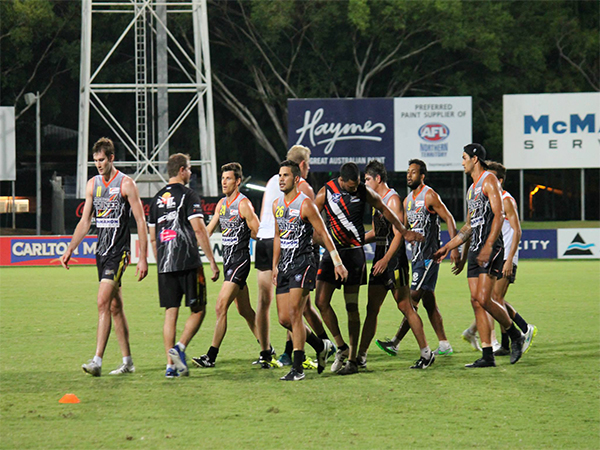 They’ve had seven interstate trips, 15 wins, and a change of headquarters in 2015.

The Darwin-based, Northern Territory Football Club (NT Thunder), will be looking to cap off a remarkable season this Saturday, with a win in the 2015 NEAFL Grand Final.

In only their seventh season as a football club, NT Thunder will take on the Aspley Hornets, who will travel from Brisbane to Darwin for the match.

Travelling interstate for football is a concept most associated with AFL players, but for NEAFL players, this travel is commonplace.

You can listen to the extended interview here:

Aspley’s trip to Darwin this weekend will be their eighth interstate trip this season.

“It takes a great deal of professionalism and preparedness to compete in what is a highly competitive competition,” Bowden says.

“They [NT Thunder] go up against the AFL clubs’ reserves sides (Brisbane, Gold Coast, Greater Western Sydney and Sydney) with majority of those guys being professional footballers, and NT Thunder regularly perform well against those sides.”

NT Thunder’s professional standing was significantly boosted in March this year when the club moved its training and administration base to the new $15 million Michael Long Learning and Leadership Centre (MLLLC).

As well as its primary role as an education centre for remote indigenous students, Bowden believes the MLLLC’s environment has allowed NT Thunder players and coaches to further enhance their training.

“The coaching offices and environment has improved markedly. The new gym, the change rooms, the recovery swimming pool and hot and cold baths have given the coaches and players the best opportunity to prepare and recover each week,” Bowden says.

“On top of that, the weather up here is very warm, averaging around 29 or 30 degrees during football season and our players train and play in it so it gives us a slight advantage over some teams who come up here and aren’t used to the warmer weather.”

There’s still a strong sense that the community underpins the club’s operations despite the logistical hurdles undertaken to ensure on-field success.

Under NT Thunder’s match selection policy, a player who is not working or studying full-time cannot be considered for selection.

Former Gold Coast Suns player, Liam Patrick, is one such player who regularly drives between his community and Darwin in order to maintain both commitments.

Patrick lives in Lajamanu, a small indigenous community about 900 kilometres south of Darwin.

“It’s about trying to build the whole package, something in the Territory that everyone belongs to,” Bowden says.

Bowden believes that as the program grows, so does community support.

“Last week there were 3,400 people at the preliminary final. In Darwin, there are about 100,000 people, so to get about 3.5 per cent of the population attending a game of football is quite extraordinary.”

As the framework within the club develops, the obvious question becomes: Where to next for NT Thunder?

Although Bowden concedes that the idea of a Northern Territory based AFL club is still far off, he says there’s still a chance.

“Just imagine if a club could base themselves out of Darwin and get the competitive advantage of knowing the weather and understanding the heat, the slipperier ball and the slipperier conditions,” he says.

“If they played six games, they could win almost every one of them. That’s a competitive advantage in such a contested, tight environment like the AFL.”

A win in this week’s Grand Final may indeed be a step towards a Northern Territory based AFL team.