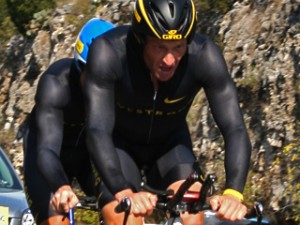 ‘This mission is bigger than me – it’s bigger than any individual,’ remarked Lance Armstrong on stage at a Livestrong gala event in Austin, Texas on Friday evening.

With all due respect Mr Armstrong – and very little is due – spare me the stomach-churning anguish of having to sit through yet another sycophantic statement about the importance of freeing society from the burdensome weight of cancer.

The speech is one that is very much needed; but you are no longer the man to be giving it.

Despite only being in my early twenties, my life in many ways has already been encumbered by the haunting spectre of the disease – even as recently as last week when my uncle passed away as a result of his condition.

Without becoming too morbid, he was unfortunately not the first family member to meet their proverbial maker at an expedited rate as a result of one form of cancer or another, joining grandparents, another uncle and an aunt in that category. My mother still battles with the disease.

Which brings us back to the Juan Pelota; the greatest drug cheat the sporting world has ever seen, and a man who arrogantly denied such claims even now when the evidence is seemingly indisputable.

Yet, even amid a litany of eyewitness accounts and the damning 1999 Tour de France EPO test, we are forever reminded – often by the culprit himself – about what an amazing man Armstrong was once he pealed off his ill-gotten yellow jersey and dismounted his carbon-made bike.

While his efforts with the Livestrong Foundation are without reproach and his charity efforts should not be ignored in the wake of his most damning scandal to date. Rightly or wrongly, he was a beacon for many people, serving as a symbol of hope, in some cases when it was needed most.

However, it also allowed for Armstrong to stockpile a great deal of public support during his once-illustrious career – providing him with shelter from the vitriolic criticism that would rain down upon the Texan if the day ever came when his exploits were brought to light. Given the sort of character testimony that has emerged in recent months, it is not beyond comprehension that perhaps there was a certain amount of planning that went into creating the ultimate get-out-of-jail free card to be used in the court of public opinion.

If that was the goal, it was an incredibly successful operation.

Compare the treatment that Armstrong has received in the aftermath of his exposure to that of Floyd Landis, Jan Ulrich, Alberto Contador, Marco Pantani, Fränk Schleck and a host of Tour de France podium finishers that have been found to have doped.

While other disgraced riders have been subject to ridicule and insult, Armstrong continues to evade such narrative.

Expanding beyond the cycling world, why has Mellow Johnny avoided the sort of fate endured by Ben Johnson, Marion Jones, Barry Bonds and, to a lesser extent, Carl Lewis?

At this point, only one rationale remains as to why Armstrong is being spared of the same fate endured by so many other high profile dopers: that his off-bike achievements excuse his cheating.

Armstrong has been afforded a level of immunity for his sporting crimes on the back of his seemingly heroic, herculean efforts to beat cancer, the Pyrenees and a raft of European challengers en route to title after title.

However, besides the fact that Armstrong has done so, it is the way in which such a buffer was created that is disgusting. The egotistical manner in which Armstrong portrayed himself – who once even referred to himself as an ‘American Hero’ – is an insult to the millions of people the world over that suffer, directly or indirectly, from the crippling disease.

He manipulated the understandably sympathetic response to his diagnosis in order to climb to the top of his sport, amassing unimaginable wealth and worldwide fame, whilst building up enough sympathy and goodwill to endure the wrath of public opinion that would ensue once he was exposed.

But here’s the other thing: we all fell for it, and donned a yellow bracelet on to prove it.

Armstrong’s story has backed us into a corner, where before his devious, deceitful behavior can be fully brought to light, we must collectively swallow our pride and admit to being duped by sports greatest conman.

Even now, as he walked away from his position with Livestrong, there are people who will still attest to his innocence.

‘We will not be deterred. We will move forward and we will continue to serve the 28 million people around the world that need us the most,’ said Armstrong at the gala event.

He’s right. We shouldn’t be deterred, we should move forward, continuing to strive to wipe out cancer, with the hope that one day no more lives are lost at the hands of the disease.

But, we must move forward without Lance Armstrong; no matter how damaging that may be to our collective pride.

Liam Quinn is a second-year Bachelor of Journalism student at La Trobe University, currently on exchange at Michigan State University.  You can follow him on Twitter: @liamquinn23