It’s the 16th of November 2005, the scene is set for a hero to be born, for a savior to step up and deliver us from the depths of football obscurity to the dizzying heights of the world’s elite.

With the scores delicately poised at 1-1 after extra time the hopes of the entire nation rested squarely on one man’s shoulders: one kick, one moment, to change the course of history.

The man was Adelaide-born John Aloisi and the moment was a decisive penalty kick against Uruguay in a world cup qualification match that would secure Australia a spot at the 2006 FIFA World Cup. 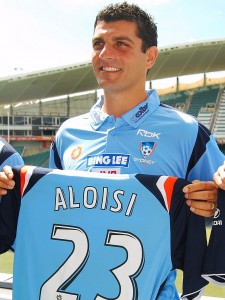 ‘I said to myself as I was walking up to the spot just do exactly the same thing you practiced the day before and you’re going to go to the world cup,’ Aloisi says as he recalls the moment as if it was yesterday, the pride on his face clear to see as he lets out a slight smile.

They are scenes etched in the minds of every Australian football fan, a shirtless Aloisi celebrating deliriously as he runs across Sydney Football Stadium’s hallowed pitch.

With one swift kick of a football, demons were slayed and years of heartache instantly forgotten, to be replaced with ecstatic elation as we joined the guest list of the world game’s biggest party.

Fast forward to October 2012 and Aloisi, despite his playing days well behind him, stands as imposing as ever. The man who was the first Australian ever to play in the big three leagues of Europe – Spain’s La Liga, England’s Premier League and Italy’s Serie A –  is now faced with a uniquely different challenge: steering the ship known as Melbourne Heart FC, in what is his first senior professional coaching gig.

‘It’s been good, I’ve enjoyed it, it’s not been easy but it’s been a smooth transition,’ says Aloisi speaking of his relatively seamless switch from playing to coaching.

‘The players respect me, they know that I’m the head coach and even though I’ve played with a lot of them they still show me that respect and that’s important, they know not to cross the line or else I might have to come down hard on them,’ he adds with a laugh, clearly enjoying the newfound power that comes with the role of head coach.

If any doubts existed over Aloisi’s quality as a coach, they were quickly extinguished after his first team coaching debut in round 1 of this season’s Hyundai A-League against bitter cross-town rivals the Melbourne Victory.

In a game played in front of 42,000 spectators, Aloisi lead his men to a hard-fought 2-1 victory in what could only be described as a baptism of fire.

As a player Aloisi was no stranger to high pressure local derbies and says that the Melbourne Victory – Melbourne Heart derby is up there with the very best in Europe.

‘It’s a big occasion, you saw last game in front of over 40,000 people, a good atmosphere and it means something to the people of Melbourne … and the rivalry is only going to become stronger.’

Aloisi is a man with a clear passion for the beautiful game and is no stranger to the national team. He has recorded 55 caps and 27 goals, including appearances at the 2004 Athens Olympics, 2005 Confederations Cup and the 2007 Asian cup. He also proved to be an integral member of Australia’s ‘golden generation’ 2006 World Cup squad.

When asked to compare the current national team with that of 2006, it took a couple of seconds for Aloisi as he looked down to come up with his answer.

‘Look the current national team is a good team; I think they’ll qualify for the world cup,’ Aloisi says.

‘It’s hard to compare because we, at the time of the 2006 world cup, had the majority of players playing at a high level in Europe.

‘Out of the squad of 22 I think probably 20 were playing at a good level in Europe, whereas now at the moment there’s probably only two or three and so we haven’t got the same level of depth as we did.’

With the recent run of Socceroos results and performances looking less than convincing Aloisi still believes that Australia should not only aim to qualify for the world cup, but aspire to win it.

‘Why not? That’s what our aim should be, I don’t see it happening in the next four to ten years, but that should be our goal,’ he says.

‘We’ve got that winning spirit about us, we just need to now produce better technical players and get better coaching and then hopefully one day we will be challenging for a world cup.’

Aloisi believes that the continuing growth of the A-League is a key factor in achieving national team success through the development of quality home-grown players.

‘The league is getting stronger each year and hopefully it will keep on growing, it’s a good breeding ground for young players who will hopefully go on to represent the national team.’

Alessandro Del Piero’s recent signing for Sydney FC is a step in the right direction according to Aloisi.

‘I think Del Piero is probably the biggest player we’ve ever had come into this country and he’s influenced the league by making it more global. People in Italy and throughout Europe and Asia are now following us and that’s huge.’

Never one to rest on his laurels, Aloisi has big aspirations for his coaching career, citing coaching the Socceroos as his ‘dream’ job.

‘I think as a player your dream is to play for Australia and play in a world cup and now starting out a new career that I’ve moved into in coaching it’s no different. It’s a goal of mine and I’d love to get there one day.’

David Allegretti is a first-year Bachelor of Journalism student at La Trobe University. You can follow him on Twitter: @davidallegretti