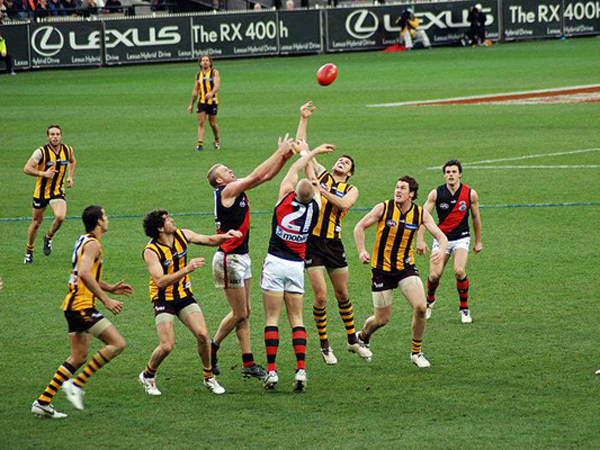 Geelong and Hawthorn both lost last week – the first time since round eight that the top two teams on the AFL ladder have been defeated on the same weekend.

But history suggests that these late-season results may not be such a bad thing. In fact, a reality check could prove to be the perfect tonic heading into September for Alastair Clarkson and Chris Scott’s men.

It is extremely difficult to remain psychologically and physically at the top of your game for an entire season. What’s uncanny however, is how many teams fall just before the final hurdle, before getting up and winning the race.

Since 2005, not one premiership team has gone unbeaten in its last five games of the season. Geelong has won three flags in that time, and was beaten on each occasion in the penultimate round of the year.

Coaches hate the catchphrase “the loss we had to have”, but recent evidence suggests that losing actually helps the business of winning.

Even Lance Franklin can see the positive, saying on Wednesday: “Sometimes it’s OK to have a little bit of a loss heading into finals.” That’s as close as an AFL player will ever get to saying it is not the end of the world to lose.

Often a defeat can reinvigorate a playing group, harden their resolve and allow the coaches to alter personnel or structures as they see fit. A loss is never the desirable outcome, but given Hawthorn and Geelong’s higher ambition, it may be just what is required.

For weeks Hawthorn has been criticised for its lack of run and spread. Central to this supposed weakness is Brad Sewell, a proven finals performer who makes up for his limited pace with terrific in-and-under capabilities. In the 2012 finals series, Sewell averaged 32 disposals, 15 contested possessions, eight clearances and six tackles across three games.

By comparison, Geelong’s game plan looked solid against North Melbourne last Friday night. Despite 13 more inside 50s, the Cats fell short by 10 points. The Kangaroos played like a team possessed and after a season of near misses and agonising fade-outs, were suitably up for the challenge more so than their highly fancied opponents.

Hawthorn’s performance on the weekend allows Clarkson to re-shape structures and personnel, whereas Geelong’s defeat reeked of a mental lapse, rather than a man-management or tactical deficiency.

Both coaches have learnt more in the last week about their teams than perhaps John Longmire has. While Sydney continues on its winning way, a loss in the next three weeks may not be the worst omen. After all, in 2012 the Swans lost three of their last four home and away games before winning the flag.

Examples of ‘good losses’ aren’t restricted to the AFL. Melbourne Storm lost five games in a row through the State of Origin period last year, yet regained its form and mojo in August and claimed the NRL premiership.

In 2007, the all-conquering Australian cricket team lost five one-day-internationals in a row prior to its unbeaten World Cup campaign in the West Indies.

The selectors tried different combinations and players in the 2-0 Commonwealth Bank series loss to England and the Chappell-Hadlee whitewash in New Zealand. Ultimately, the period of trial and error worked in Australia’s favour.

Brad Hodge replaced Andrew Symonds at number five in the batting order against the Kiwis, making 131 runs at 65.5 to book a plane ticket to the Caribbean. Previously, Hodge was in and out of Australia’s limited overs team. But in the ensuing World Cup he was a vital figure in the middle to lower order, finishing with an average of 76 for the tournament.

This sporting anomaly extends to golf and soccer. Adam Scott and Bayern Munich have both won major tournaments in 2013 after heartbreaking losses last year. Both learnt, developed and ultimately conquered.

Sydney has games against Collingwood, Geelong and Hawthorn to come. The Swans will approach each match with a winning mentality, but as John Longmire’s men learnt in 2012 one loss from these three matches could well improve their chances of going back-to-back.

Sometimes getting pushed one step back is a pre-requisite for moving two steps forward.

Tom Morris is a third-year Bachelor of Sports Journalism student at La Trobe University. You can follow him on Twitter: @tommorris32