Protesters brought over 800 dead ducks to the steps of Victorian Parliament. 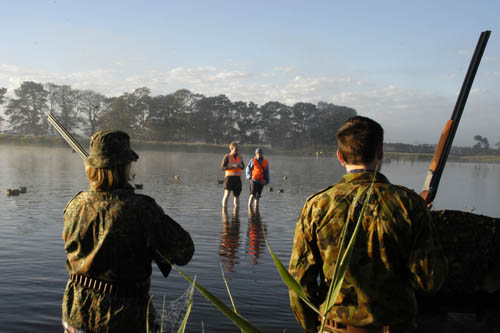 Update: Game Management Authority have issued a press release stating that Koorangie State Game Reserve, and others, have been closed one week into the duck shooting season in order to protect threatened species.

810 dead ducks were laid out on the ground on Spring Street in front of the Victorian Parliament last Monday by the Coalition Against Duck Shooting (CADS).

The birds were collected by CADS volunteers from Victorian wetlands near Kerang after hunters left them there during the opening of the duck shooting season on 18 March.

The protest aimed to highlight the number who were shot and not collected – something that hunting regulations require hunters to do.

The protestors also suggested that setting a bag limit of ten birds to be shot and collected per hunter per day is not being followed.

Each year the Game Management Authority decide how many regulations to put in effect for the season.

This can include restricted areas that can’t be accessed by hunters, a limit on how many birds can be shot and collected, and a reduced season length.

This year, they also added a restriction on species that can be targeted.

CADS had over 150 volunteers at hunting sites last weekend to help rescue wounded birds and try to scare away others at risk of being shot.

The volunteers got up before dawn in order to be in the lakes by sunrise when shooting began, despite regulations excluding them from hunting zones until 10am.

CADS volunteers claim the action began much sooner in Kerang with hunters beginning to shoot at least 20 minutes before regulations allow.

Laurie Levy, founder of CADS was the first protestor to be booked and given a season ban by Game Management Authority officers for wading into the water to collect a fallen duck.

CADS organiser Lynn Trakell tells upstart that the bird that Levy went after was trying to fly away from the noise before being shot by a hunter.

“We (the protestors) have to stay 25 metres back from the water’s edge by law but Laurie wasn’t going to have that, so he went into the water and picked up the little pink-eared duck,” she says.

Levy brought the bird to the waiting vets but it had to be euthanized due to the extent of it’s injuries.

Rescuers can be booked, and subsequently fined, due to regulations introduced in 2014 that ban media and rescuers from hunting sites until 10am on opening day – four hours after shooting begins.

Fines this year are $930, but it’s unclear at this stage how many fines were issued.

Rescuers put themselves in danger of being injured or even shot, which happened in 2011.

The 2017 season was given the full go-ahead by the Game Management Authority despite concerns about game species decreasing in 2016 by 42% from 2015 numbers.

CADS organisers suggested that many hunters seem unable to distinguish between species when aiming their guns, as in 2016 when a swan was shot.

It is impossible to identify those responsible for shooting the protected species.

Trakell says one rescuer came from as far as New Zealand to volunteer and was shocked by the number of rare freckled ducks, a protected species, he found shot and discarded.

Victoria is one of the only states that still allows duck hunting.

The sport was banned in Western Australia and New South Wales in the 90s and in Queensland in 2005.

But it’s been allowed to continue in Victoria despite ongoing controversy, with multiple animal rights groups contesting the sport on grounds of cruelty and ecological damage.

Victorian Minister for Agriculture Jaala Pulford tells upstart the Andrews Labour Government had promised to continue the season, and that it makes a significant contribution to Victoria’s economy.

“An estimated $439 million flows into towns and regional centres across Victoria, supporting approximately 3,500 jobs,” she says.

“We are investing in sustainable hunting to support more than 50,000 Victorian game hunters,” she says.

The season will continue until 12 June.