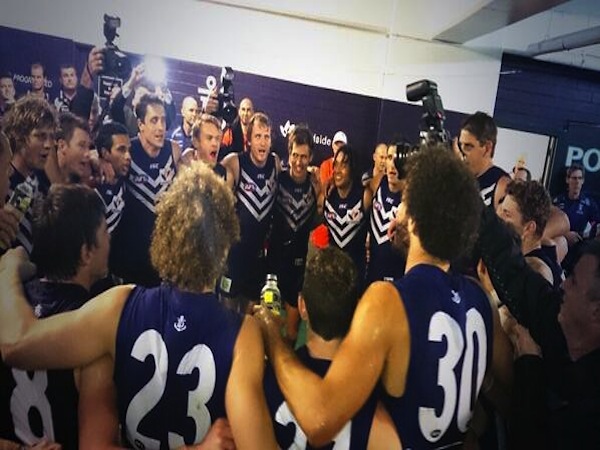 It’s been 19 years in the making, but Fremantle has finally made it all the way to the MCG on the last Saturday in September.

Once the easy beats of the AFL, the Dockers have built one of the most talented and disciplined teams in the competition.

Before the 2013 season, Fremantle had only seen September action four times, with its best showing being a preliminary final loss to the Swans in 2006. The Dockers turned the table on Saturday night, storming into their first ever Grand Final with a dominant display which would have even the most assured Hawthorn fans worried.

2011 was the year Fremantle looked to change its identity. Ditching the traditional anchor from the club logo and guernsey was a start, but the real game changer came when the club appointed Ross Lyon as senior coach.

The swift axing of Mark Harvey came on the back of seven straight losses to end the season and the club moved quickly to appoint Lyon on a multi-million dollar deal.

Lyon definitely didn’t endear himself to Saints fans after walking out on the club he steered to two successive Grand Finals with a year left to run on his contract. With St Kilda’s premiership window appearing to be closing, Lyon took a fresh opportunity with Fremantle.

The way the club acted by instantly sacking Harvey as soon as it was known Lyon was available received much backlash, but it was a bold and club-defining decision which has ultimately paid off.

Lyon has brought upon a new professionalism and strong club culture and thus placed the club in a strong position to challenge for premierships in years to come.

A “win anywhere, anytime” approach has also been a key in the success of Fremantle.

The Dockers have historically struggled outside Western Australia, but under Lyon’s tutelage they have proved hard to beat. Their win over Geelong this month in the qualifying final at Simmonds Stadiums is evidence of this.

Whilst Fremantle have recruited well in the draft over the past few years, the sprinkling of recycled players in their list has been key to the club’s success. Much-maligned defender Zac Dawson has been nothing short of superb since he followed his former coach over the Nullabor.

On Saturday, the league’s highest scoring team will play the leagues best defensive team. Something has to give.

The Dockers’ frenetic pressure all over the ground was clearly evident against the Swans. They out-Sydneyed Sydney, if you will, and put the game to bed by half-time.

Chris Mayne in the forward half has been a catalyst of this. In the preliminary final against the Swans, Mayne completed a record 39 pressure acts – 34 of those inside the Dockers’ forward 50. The highest figure recorded since Champion Data started recording this statistic.

But defence is certainly not the only string in Fremantle’s bow.

The Dockers’ midfield is star-studded and led by Nat Fyfe, David Mundy and Michael Barlow, all of which didn’t make the All-Australian side, but were a walk up start in many people’s eyes.

They have a potent forward line that can certainly kick goals in a hurry. The brilliant Matthew Pavlich plays as a permanent forward these days and almost won the Coleman Medal last year. Michael Walters, Chris Mayne and Hayden Ballantyne can all kick bags of goals and wouldn’t look out of place in anyone’s forward 50.

Sandilands is the key to the Grand Final on Saturday. If he gets ahold of Max Bailey and continually gives first use to Fremantle’s midfield, it will go a long way in the Dockers’ quest to pull off an upset and win the club’s first ever premiership.

Fremantle has captured everyone’s imagination this finals series by playing some sublime football, but its biggest test still awaits.

If victorious on Saturday, both Ross Lyon and Fremantle will be vindicated for an astute and brave decision two years ago.

Ryan Lepore is a third-year Bachelor of Journalism (Sport) student at La Trobe University, and a staff writer for upstart. You can follow him on Twitter @ryanlepore.