As a junior basketball star, Patrick Bines never knew he would be an AFL player. 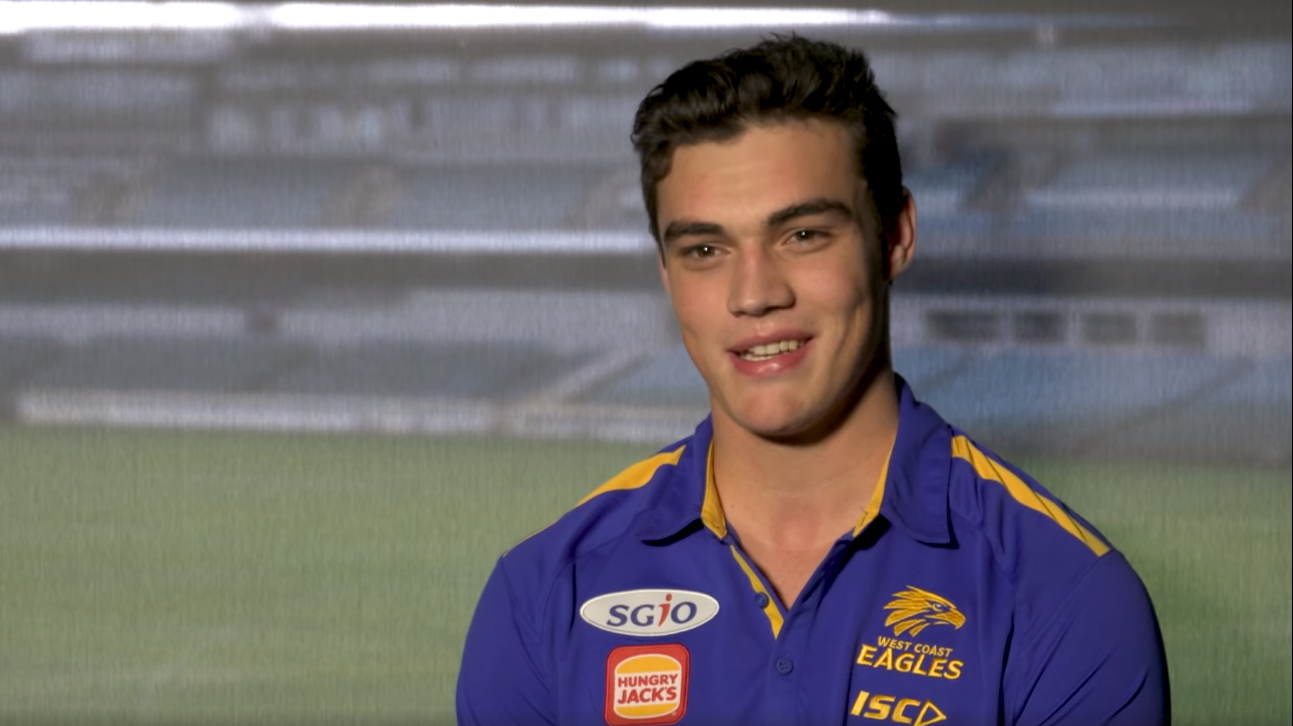 Imagine playing basketball your whole life, dominating throughout your junior career and before you know it, you’re on an AFL team. The people you watch all the time on TV are now suddenly your teammates.

This was the reality for category B rookie, Patrick Bines of the West Coast Eagles.

A talented athlete as a youngster, he sacrificed footy at the age of 13 to focus on basketball with the Melbourne Tigers.

Bines was coached by his dad Glenn for much of his junior career. He idolised Australian basketball legend, Andrew Gaze, who was heavily involved in the Melbourne Tigers association, as a kid growing up.

“Andrew’s love for the game inspired me to love what I do, even outside of basketball, and that was a big lesson I learnt from him,” Bines told upstart.

He used Gaze’s basketball knowledge as well as his dad’s to launch himself into three state teams for Victoria Metro, at the ages of 15, 16 and 17.

Standing at six foot six and weighing around 95 kilograms, Bines was an athletic machine who could dominate the game in different ways, including shooting and defending.

One of Bines’ favourite sporting moments was in 2016, when his state team won the National Championships in Adelaide.

“That was a great team, and was special to win as a couple of my teammates’ family members had passed away during the week, and to win the gold medal was special to do it for them,” he said.

The sportsman then took another leap in his basketball career, being added to the Australian under 17 team for the World Championships in Zaragoza, Spain in 2016.

Although Bines cherished that moment and the team finished seventh in the world, he felt worn out after the tournament and needed a break from basketball.

He started to question whether the sport was a realistic option for him moving into the future. There was such a small possibility of Bines going professional in basketball, due to so much competition and imports taking over spots on NBL rosters in Australia.

As footy had been a long-time passion, he started considering a transition into the world of football.

“As I got older and wiser, I started to realise that footy was what I wanted to pursue. Footy had always held a big place in my heart,” he said.

Through the support of his family and contacts with Hawthorn AFL coach, Alastair Clarkson, Bines started training with the Box Hill VFL side, which is the Hawks’ state-league affiliate.

But Bines didn’t give 100 percent during his time at Box Hill and got out of shape, weighing close to 110 kilograms, leading to the club letting him go.

Bines was gutted but determined to get in the right headspace and hopefully get a second chance.

He then decided to hire former North Melbourne AFL player, Brady Rawlings as his agent.

Rawlings said there was a chance that Bines could get picked up in the AFL rookie draft, and the West Coast Eagles were interested given his successful basketball background as well as his height and build.

The Eagles then decided to give Bines a trial in Perth, and he impressed.

Only days later, Bines got a call from West Coast coach, Adam Simpson, who said that the Eagles would love to pick him up in the latest rookie draft.

“I was so ecstatic, and my parents were so happy for me,” he said.

Bines was then selected in the rookie draft by the Eagles, only a year after competing in the World Championships for basketball.

What a difference a year makes.

Upon arriving at the Eagles, Bines was impressed by their professionalism and their ability to make him feel welcome straight away.

He is currently playing as a key forward, as well as a ruck in the Eagles’ reserves side in the WAFL, and is hoping to show strong form in the hopes of receiving a call up to their AFL side.

Bines joins a lengthy list of former basketballers to transition to the AFL including Adelaide’s Hugh Greenwood and Melbourne’s Christian Petracca.

Aidan O’Carroll is a second year Bachelor of Media and Communications [Sports Journalism] student at La Trobe University. You can follow him on Twitter @AidanOCarroll7

Employees set to receive $1500 a fortnight for six months

The Vatican has praised the Australian High Court decision.