Meg Hutchins is on the forefront of women’s AFL both on and off the footy field, but she attributes her impressive career down to a click of a button or two, Aimee Dawson reports. 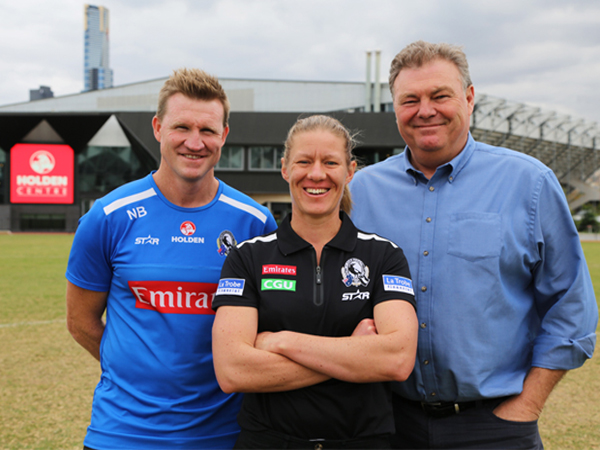 Currently playing as a defender in the newly established Victorian Football League Women’s competition for the Eastern Devils and working at the Collingwood Football Club, Hutchins, 34, has created opportunities for herself through her initiative – with two defining emails setting her on course.

“Basically it was an email from Lou (Wotton), one of my good friends at the Devils and she emailed saying come and support my team, we’re playing at this place,” Hutchins said.

“I wrote back and said I can’t come and support, but can I come and train and basically that was that.”

That was the moment that set Hutchins’ football career in motion.

After a ten year break from the game, Hutchins has been playing with the Devils ever since.

Rules forced Hutchins to stop playing football with her local club in Kew after VicKick level, now known as AusKick.

She continued to be involved in sport, running water for her brother’s football team, the University Blues, as well as trying her hand at many other sports.

“To be honest I didn’t really think anything of not being able to play… I just didn’t play anymore, and that was that,” Hutchins said.

“Once I had to finish football, mum just threw me into any sport that would occupy me – hockey, basketball, rowing, running, a lot of different things.”

Despite having success in other sports, such as competing in rowing at a national level, football was still Hutchins number one choice.

Her decision is one that has seen her receive a number of accolades; the best first-year player, the Helen Lambert medal, representing Victoria and being involved in the recent exhibition matches as curtain raisers to the AFL.

However one achievement still waits for Hutchins, the elusive premiership.

“I’ve actually never played in a grand final so I’m hoping that the highlight of my career is still to come,” Hutchins said.

“I guess I feel like if I can tick that one off, that will supersede anything that I’ve ever tried to achieve.”

The second defining click in Hutchins life would come earlier this year, with an email to Collingwood chief executive Gary Pert.

“He got back to me within three hours and said that I’m away this week but we will catch-up next week, so I came in and caught up with him and David Emerson, who is now my manager, and two meetings later I was offered a full-time job.”

As Women’s Football Operations Manager, Hutchins is working a job that combines her three passions – football, the Collingwood Football Club and women’s football.

With the inaugural season of the national league getting closer, Hutchins is hoping to be able to play in the exciting new competition as well as using her position at Collingwood to launch a number of other projects, including a pathway for female coaches.

“I think the new league has come at the right time. I think that if this was going to happen three years ago, it probably would’ve been too soon,” she said.

“The next year or two are going to be pretty amazing in terms of women’s sport, so I think sit back and enjoy the ride for the time being and then we build more.”

Aimee Dawson is a Bachelor of Journalism (Sport) student at La Trobe University. You can follow her on Twitter @AimeeLDawson