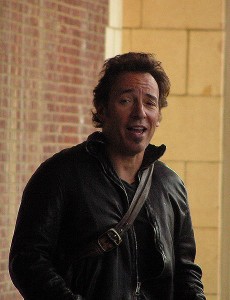 Federal Treasurer Wayne Swan’s strange choice of topic for the John Button Lecture last week left many Australians, myself included, not only shocked by the revelation that our politicians are actually human, but also a little dazed.

Surely given the current global financial climate, the man in charge of our nation’s purse strings must have more important things to talk about than what music gets him pumped up every morning?

Swan revealed in the lead up to the lecture that he is a huge fan of Bruce Springsteen, and that the Boss’ class aware musical lyrics has had an important impact on Swan’s own ideology, and on the policies that the Labor government has implemented since coming into power in 2007.

In a YouTube video posted by Swan preceding delivering the lecture in Melbourne last week, he says: ‘For me Springsteen encapsulates the passion he has, and I have, for working people.’

This isn’t the first time that the work of musicians has been used by politicians to try to connect with their public and communicate their messages and ideas through a popular medium.

This certainly isn’t the first time Springsteen has been used as the vessel of political deliverance.

I couldn’t help but think of Ronald Reagan’s ill-informed attempt to use Springsteen’s song Born in the USA as a campaign anthem during the 1984 presidential election in the United States.

In an attempt to appeal to the patriotism of the American public, Reagan tried to use the song as a message of hope and nationalistic pride. What he failed to do was grasp the irony of Springsteen’s message; that veterans of the Vietnam war were being abused in the very country that they had gone overseas to protect.

Apparently Reagan misinterpreted, or simply didn’t read, the opening lyrics to the song, where Springsteen’s gravelly voice intones that his protagonist was ‘born down in a dead man town; The first kick [he] took was when [he] hit the ground.’

Reagan’s attempt to use the Boss’ music backfired; Springsteen asked that the song no longer be used in the campaign. The lesson learnt was that using pop music in politics is risky business.

Swan’s own connection to Springsteen’s music seems more genuine and well informed. During the John Button lecture, Swan said, ‘[Springsteen] responded with an abiding question; when are ordinary people – the people who get up in the morning, work hard and look after their families going to get a fair go? Nothing has fuelled my own public life more than this question.’

Swan said that Springsteen’s influence inspired the essay he wrote for The Monthly in March this year, where he attacked the major players in the mining industry for their excessive wealth in broadening inequality in Australian society.

Swan continued to defend his stance in the lecture, saying: ‘I don’t regret a word of it.  Not for a second. In fact, my only regret is not going in hard enough, because every criticism I made has been played out almost to the letter on our national stage.’

Although Swan’s grasp on the message of Springsteen’s work is much more accurate than Reagan’s, was using his musical taste in a political context a smart move?

Given that Labor is currently sitting behind the Coalition in the polls on a two-party preferred basis, taking a risk such as the one Swan did during the John Button Lecture is perilous. Although Swan was clearly attempting to connect with the public on a more personable level, the current media coverage is focusing more on the Springsteen connection and less on Labor policies.

The Coalition has even been able to use Swan’s lecture as fodder for criticism. Shadow Treasurer Joe Hockey said that he was concerned that Labor was using a rock star to model their policies.

‘If that’s the right benchmark we may as well have Glenn A. Baker and Molly Meldrum running the country,’ he said.

Using popular music in politics always runs the risk of alienating the public, who might perceive it as either ill-informed or a stunt to shy away from serious political discourse. Here’s hoping that Swan’s latest attempt doesn’t leave the ALP dancing in the dark.

Laura Hurley is a third year Bachelor of Journalism student at La Trobe University and is the current editor of upstart. You can follow her on Twitter: @laurajanehurley