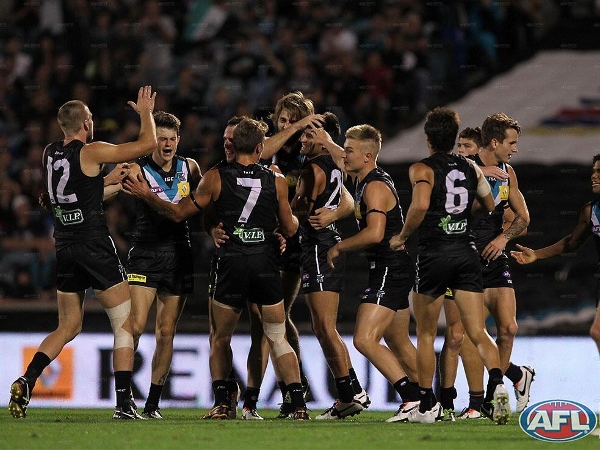 In round 19 last year, Greater Western Sydney notched up the second and final win of its inaugural AFL season. The Giants were convincing 34-point victors on that sunny Saturday afternoon, casting a dark cloud over their opponent – the Port Adelaide Football Club.

While the defeat was inexcusable, it appeared to be a harsh fate for the Port stalwart – more a knee-jerk reaction than a calculated solution to the club’s myriad of problems.

Port Adelaide president Brett Duncanson emotionally announced his resignation while delivering the verdict on Primus, debt worsened after an operating loss of $4.1 million and home crowds dipped below an average of 20,000 for the first time since the club entered the AFL in 1997.

Make no mistake, the Power were in serious turmoil. Saviours were a necessity, and although they are not clear of danger just yet, it appears they have found a dynamic and influential trio to lead them towards redemption.

The appointment of well regarded media personality and financial expert David Koch last October has already reaped rewards, while Ken Hinkley, named senior coach the same week, has been flawless. Yet, it’s easy to forget the role played by Travis Boak in the sudden resurgence.

Several Victorian clubs, most notably Geelong, were reportedly very keen to lure the 24-year-old from Torquay back home to his family. Given the off-field dramas and lack of on-field success, Boak could’ve been forgiven for making a move.

Instead, Port’s star midfielder showed faith and set a wonderful example for his teammates to follow. Those leadership qualities culminated in Boak replacing Dominic Cassisi as captain for 2013, a position he has thrived in to date. Against West Coast last Saturday night, the new skipper kicked two crucial goals and was outstanding in a remarkable comeback victory.

Second on the ladder and undefeated after five rounds, Port’s perfect start has been a sight to behold. The Power only won five games for the entire 2012 season, and the current 5-0 record is the club’s best ever opening streak.

The fixture has been kind to them – Melbourne, Gold Coast and GWS are substandard sides presently, while the highly regarded Adelaide Crows and West Coast Eagles are in horrible form in comparison with last year’s efforts and 2013 expectations.

But it’s the manner in which Port Adelaide has won its games so far that has been truly impressive. The Power smashed the Demons by 79 points, comfortably beat GWS and Gold Coast and overturned 31 and 41-point deficits in the third quarter against the Crows and Eagles respectively.

There is a renewed sense of resilience and spirit emanating from Alberton, and new coach Ken Hinkley deserves plenty of credit. An assistant at Gold Coast for three years, having previously worked with Geelong and St Kilda, Hinkley was unfairly dubbed the ‘last man standing’ when he filled the vacant position – a reference to Port Adelaide’s difficulty finding a willing suitor.

Malcolm Blight, along with other high profile members of the football inner sanctum bristled at the tag, endorsing Hinkley’s credentials. They have been vindicated thus far.

The seamless assimilation of David Koch into the fold has been equally telling.

Koch is a winner, someone who isn’t interested in excuses, roadblocks or “can’t do” mindsets. His positive attitude and ambition are infectious qualities, and combined with business nous and passion for the club, he has generated tremendous hope and direction in a short period of time.

Membership numbers are reflective of change, with recent figures showing an all-time Port Adelaide record of 38,305. It seems public perception of the Power is changing too.

Port Adelaide has been trending around the country since last night! #weareportadelaide

In the grandstand post-match last weekend, Koch and Hinkley embraced, surrounded by 26,132 vocal supporters. It was a wonderful football moment, encapsulating Port Adelaide’s fresh and united direction. It also sparked memories of another coach-president partnership.

Back in October 1998, Collingwood was suffering from its own financial crisis, board instability and lengthy on-field woes. Eddie McGuire took over as president and sought change, appointing Mick Malthouse as coach for the 2000 season. Just like Port Adelaide, the Magpies’ hadn’t played finals for five years, and won their first five games.

Collingwood faded badly to finish 15th that season – a warning to the legitimacy of Port’s finals pursuit – but the wheels had been set in motion. The Magpies would play off in consecutive grand finals just three years later.

In the press conference to unveil Malthouse as coach, the man of the hour declared an audacious dream: make Collingwood the Manchester United of the AFL. People laughed.

While the Magpies haven’t won as many premierships as the Red Devils, they have become a powerhouse.

At the start of the 2013 season, David Koch said Port Adelaide shouldn’t be mocked for chasing elite AFL players, such as Lance Franklin. People laughed.

There is still an arduous road ahead for the Power, but the signs are certainly good. And as inspiring as their first month of football action has been, we may look back on October 2012 as the real golden month in a new era at Alberton.

Paul Bastin is a third year Bachelor of Media Studies student at La Trobe University and upstart’s sports editor. You can follow him on Twitter: @PaulBastin10.