It’s hard not to be impressed by what Shayne Reese has achieved in her short career. The retired swimmer has represented Australia on the world stage, currently operates her own swimming school and even has a couple of Olympic medals tucked away.

‘I began swimming at the Ballarat YMCA Swimming Club at the age of ten and over the years continued to improve every time I got in the water.’ 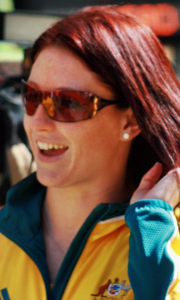 Reese, who attended Damascus College, says she made it to the elite national level at an early age by ignoring parties and other social activities that would compromise her training.

‘I wanted to get the most out of every training session I did and for that I couldn’t afford to be tired or hung-over.’

‘You only have limited time to be an elite athlete in some sports and for me I didn’t want to waste my opportunity because I wasn’t disciplined enough.’

Though Reese continued to develop as a swimmer, she admits that at one point she was stagnating.

‘I was at a stage in my life (and) career where I had to decide to either have a crack at my swimming or give it up completely.’

In 2002, Reece decided to move from Ballarat to Melbourne to live with fellow swimmer Sarah Kasoulis and train under renowned coach Rohan Taylor.

She regards Taylor as having an enormous influence on her career.

‘From the first day I went to train with Rohan he pushed me beyond what I thought I was capable of.’

‘I owe all of my achievements to Rohan. I could not have done any of them without his support and guidance throughout the nine years he was my coach.’

However Reese soon hit a roadblock that threatened to dismantle her newfound confidence.

Despite entering the 2003 FINA World Championships ranked second in the 200 metre freestyle, she failed to be selected for the event. Reese is blunt when describing her reaction to the news.

‘I was shattered,’ she says.

But rather than be discouraged, Reese used it as motivation to work even harder. In April 2004, she swam a personal best time at the Australian Swimming Championships and inched ever closer to a berth on the world stage.

Reese soon realised her dream when she was selected as part of the Australian Olympic team to compete in Athens, thereby becoming Ballarat’s first ever swimmer to achieve the honour.

Though thrilled with the news, Reese admits that initially she wasn’t so much excited as she was thankful.

‘My first reaction was relief,’ she says.

‘And then elation kicked in.’

Reese reached the 4×200 metre relay final in Athens, which remains a vivid memory for the swimmer.

‘I can remember walking out onto the pool deck for the final of that race and the atmosphere was electric.’

‘I can still see the stands full and the feeling of joy I had as I walked out with my team mates to swim in that final.’

But in a flash, this thrilling moment turned into gut-wrenching disappointment.

Reese and her team finished fourth in the event, walking away without an Olympic medal around their necks. She describes it as a harrowing result.

‘At the time I felt that finishing fourth in an Olympic final was a great achievement, which to many people is.’

‘But as I was to learn in the years to come, missing out on a medal is almost heart breaking.’

Reese says that rather than dwell on what could have been, she used her Olympic experience as motivation.

‘After that magic experience of going to the Olympics and being a part of the Australian team, it was something that I wanted to continue to be a part of.’

‘That was now my goal. Every year I wanted to be a member of the Australian Swimming Team.’

Unsurprisingly, Reese was selected in the Australian Olympic team for Beijing. In the finest form of her career, she appeared destined for glory.

Despite swimming the second fastest time in the 4×100 metre heat, Reese was replaced by Libby Trickett in the final team. It was a painful blow for Reese, who describes it as ‘devastating,’ and was met by complaints in the media from Reese’ mother.

However, Reese says she had to focus on the positives.

‘I had swum the fastest I had ever swum. I had almost achieved everything I had ever wanted to achieve in my swimming career. I had trained the hardest I had ever trained and was so focused on what I had to do to achieve my goal.’

‘This was my motivation to continue on swimming for the following year.’

Reese went on to win bronze at the 2009 FINA World Championships in Rome, which was her final international performance. She states that it was one of the most memorable moments in her career.

‘I absolutely love Italy and for me to be able to finish off my career there, with the atmosphere that the Italians created, was very memorable.’

Reese retired from professional swimming in 2010, which was easier than she expected.

‘I thought retirement was going to be a tough decision to make, but in the end it really wasn’t.’

‘It felt like the right time for me to move on from the sport. I was ready to move onto the next chapter of my life.’

Since then, Reece has been working with her partner Luke Harper at Shayne Reese Swimming in Ballarat, a swimming school which they opened in 2011.

‘We wanted to bring something new and unique to Ballarat,’ she says.

‘We couldn’t have asked for a better response to our new business.’

Reese has certainly achieved an incredible amount  in a short space of time. It appears her positive approach to life has been at the heart of the success she has enjoyed both in and out of the pool.

Nick Schomburgk is a Bachelor of Journalism (Sport) student at La Trobe University.