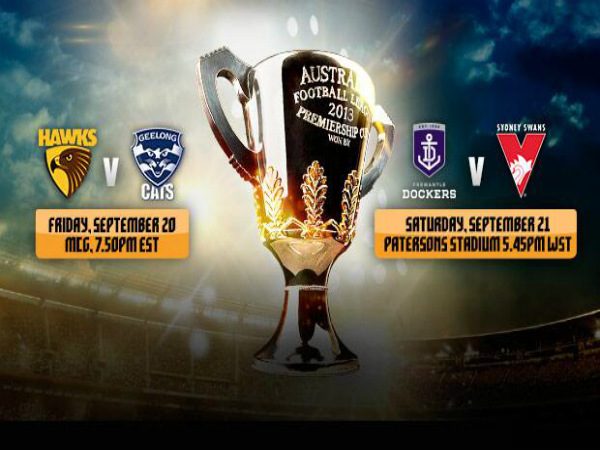 Fremantle, Geelong, Hawthorn and Sydney are all desperate to earn that elusive place in this year’s Grand Final, but each club will have to overcome the intense pressure of a preliminary final.

History shows that some of the most exciting games of the year take place at this stage of the season. With everything at stake, players perform at new levels and give it their absolute all.

The football world will be hoping that this weekend’s matches are just as thrilling as these five classic preliminary finals:

Adelaide looked certain to be heading into its first Grand Final at the main break, producing a clinical first half, to lead the Bombers by seven goals. It wasn’t to be however, as an Essendon revival, led by Darren Bewick, Sean Denham and Paul Salmon, saw the margin reduced to just two straight kicks at three-quarter time. In a frenetic last quarter, the ‘Baby Bombers’ took the lead for the first time midway through the term and remarkably persevered to win by 11 points. The extraordinary comeback by Essendon left the Crows playing group in a state of despair, knowing that they had blown a great opportunity to play Carlton in the 1993 Grand Final.

This confrontation would go down as one of the most entertaining games of the 90s. Despite trailing by three majors at quarter-time, the Cats registered seven unanswered goals and managed to keep North Melbourne goalless in the second term. Geelong got out to a five-goal lead in the second half, although the magnificence of Wayne Carey inspired a spirited Kangaroos comeback. With the scores level in the closing seconds of the final term, John Barnes dropped a mark in Geelong’s forward pocket, but Leigh Tudor read it beautifully and centred it to Gary Ablett Snr. deep in the goal square. The Cats’ legend goaled with the last kick of the game, shattering the hearts of the North Melbourne faithful.

Nobody gave Carlton any chance of defeating the minor premier Essendon. The Bombers watched on in complete shock as the Blues took a four-goal lead into the half-time break. As expected, Kevin Sheedy’s men responded in the premiership quarter by kicking seven goals to two, giving it an 11 point three-quarter time lead, with Carlton needing a miracle for its Grand Final hopes to be realised. Carlton champion Anthony Koutoufides was instrumental in lifting his teammates and helping the Blues regain the lead late in the final quarter. With only 40 seconds remaining, and the Bombers trailing by a solitary point, Dean Wallis marked the ball in the centre. All he had to do was bomb it long into Essendon’s forward 50, but he chose to play on and was consequently tackled by Carlton’s Fraser Brown. This was without a doubt one of Carlton’s greatest finals upsets.
:

More than 98,000 spectators packed the MCG to watch an exhilarating contest between Geelong and Collingwood. The Cats were expected to win comfortably after such a dominant season. However, the Magpies relished playing with the underdog label, and were ready to give captain Nathan Buckley one last chance at premiership greatness. It was goal-for-goal during the first three terms, as less than a kick separated both teams going into the last quarter. Trailing by three goals early in the decisive final term, Collingwood reduced the margin to five-points with one-minute left on the clock. The Magpies midfielders managed to work the ball into their forward half in the dying seconds, but Geelong’s superb defensive pressure forced a stoppage. The siren sounded soon after to give the Cats a hard-fought victory over a gallant Collingwood outfit.

It has been a year since the Crows almost pulled off one of the biggest upsets in finals history. Hawthorn was tested by Adelaide right from the outset, with its backline struggling to contain the dynamic duo of Kurt Tippett and Taylor Walker up forward. Like all good sides, the Hawks came back from a five-point deficit at half-time to kick six goals to three in the third term. The Crows refused to go away though, regaining the lead through an inspirational goal on the run by Graham Johncock with only a handful of minutes left in the game. But in the end it was the individual brilliance of Cyril Rioli that made the difference, as the left-footer booted one goal and set up Lance Franklin to seal a gripping Hawthorn win.

We’ll soon find out whether the 2013 preliminary finals live up to lofty expectations, but 2013 form suggests that they will.