After a shock loss in the second round of Wimbledeon, Rafael Nadal would have been hoping for redemption at the US Open. Unfortunately that won’t be possible with the Spaniard pulling out of the tournament with knee tendinitis, the same injury that kept him out of the Olympics. 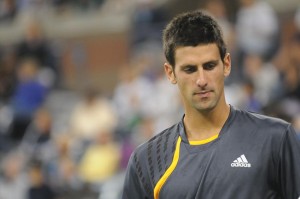 29 out of the last 30 Grand Slams have been won by the ‘big three’ consisting of Federer, Djokovic and Nadal. With Nadal’s absence it could open the door for a new winner or it could just be an easier passage through to the final for the favoured pair.

The Wimbledon champion and world number one Roger Federer has done what few experts predicted this year and claim back the world number one status. The Swiss maestro has been the standout player of 2012 with 56 wins and only seven losses to his name so far this season. He has also won a season high six titles and is coming off a Masters Series win in Cincinnati earlier this month. Federer is bidding to win a record sixth US Open title.

The reigning champion hasn’t quite lived up to the dizzy heights of his 2011 season, but few could after his record-breaking season last year. The former world number is starting to hit form again at the right time of year with a win in Toronto and a loss in the final to Federer at Cincinnati. Djokovic has been given what looks like on paper an easy draw into the quarter final where he could possibly face 2009 champion, Juan Martin Del Potro

The Brit is on top of the world after winning the gold medal in front of his home fans at Wimbledon during the Olympics. Beating Roger Federer in the final on his favourite surface made it even the more sweeter. Murray will be looking to ride that wave of emotion into Flushing Meadows over the next two weeks and finally break through for his first Grand Slam title.

The 206cm giant is in the best form of his life and is the top American hope going into the US Open. He is ranked number 10 in the world and will be seeded ninth in the tournament due to Nadal’s withdrawal. His best performance at a Grand Slam was reaching a quarterfinal at Flushing Meadows last year and will be hoping to at least reach the same mark again. His massive serve and powerful forehand could be dangerous and is a dark horse to progress deep into the second week.

The last man to win a Grand Slam title barring the big three, ‘Delpo’ could be ready to win his second US Open. He played flawless tennis over the two weeks in New York three years ago and if he can reproduce that, could certainty win again. It has been a solid but unspectacular 2012 for Del Potro with two titles and an Olympic bronze medal to his name. He will ook for a big tournament to finish the season in style.

There are four Australian’s represented in the men’s draw this year. Bernard Tomic will spearhead our assault however the number one ranked Aussie has had what can only be described as a very poor second half of the year. Tomic has fallen out of the worlds top 32, meaning he has missed a seeding but will face Carlos Berloq in the first round, if successful, Andy Roddick could await him in the second. Lleyton Hewitt was awarded a wildcard and will face unseeded German Tobias Kamke in the first round. Matthew Ebden also has a very winnable game against world number 67 Tatsuma Ito, while Marinko Matosevic has a tough assignment against twelfth seed, Marin Cilic.

Unfortunately I don’t see the trend breaking here and see a one verses two final with Federer and Djokovic squaring off in two weeks time. I feel Djokovic might just have the upper hand, his body will be that little bit fresher and will be peaking for this.

Djokovic to win in four sets.

Ryan Lepore is a second-year Bachelor of Journalism student at La Trobe University. You can follow him on Twitter: @ryanlepore.