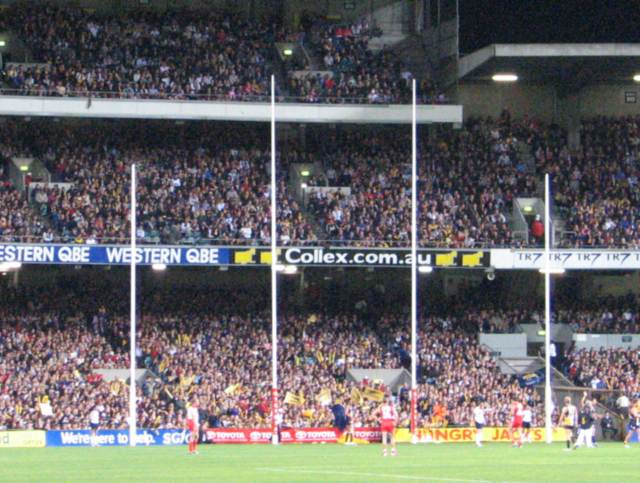 A constant struggle to modernise its rule book has left AFL fans nostalgic for a bygone era.

The game seemed so much more simplistic in years gone by. Only a handful of rules – holding the ball, push in the back and deliberate out of bounds – spring to mind as commonly enforced free kicks. Umpires were seemingly a less prominent influence on the course of the match.

Presently, the umpires are being asked to view the game in an entirely different light. Ruckmen spacing, hands on the back, sliding rule, rough conduct, measurements, specifics – the list goes on and on. The bloating rule book has forced umpires to intervene in games at an alarming rate, with the whistle often greatly affecting the final outcome.

No doubt, some rules have to be introduced or altered as football evolves. But when the Laws of the Game Committee work on a new rule to implement, they don’t appear to consider the consequences.

Take the hands on the back rule for example. It was introduced to eliminate the grey area between a push in the back and simply placing the hands on the opponent during a marking contest – the objective made sense. When the rule was first enforced, it was inevitable agony for all supporters, as every hint of a hand on a back was penalised, even if it had no effect on the marking contest.

After a number of years, the enforcement of the rule has been tapered appropriately in the hope that players will avoid placing hands on the back of an opponent and seek to mark or spoil, while not interrupting the flow of the game with too many whistles.

However, the result is a bit of an oxymoron – the rule is not strongly enforced so players still place hands on the back; but every now and again they will be penalised, making for confusing and frustrating inconsistency.

More recent laws, such as the sliding rule, are going through the same process. The difference is that not only is it a much more complex issue than the hands on the back rule, it conflicts with the rule against high contact.

In the case of two players approaching a stationary or low-bouncing ball, the new rule makes it wrongful for one player to dive or slide along the ground while collecting the ball if he makes contact below the other player’s knees in the process.

The contradiction lies in that before this rule was implemented, the sliding player would often be awarded a free kick if high contact was made – usually between the first player’s head or neck and the opposing player’s feet or legs.

Now it’s a baffling mix between the two rules and their various clauses that has resulted in some bizarre calls. In a split second, an umpire is forced to determine whether a player has made high contact to another player, made contact with his back or engaged in rough conduct, at the same time as being wary of unlawful sliding or ducking of the head.

Umpires are humans, and humans will make mistakes no matter how clear the rules are. In the AFL, they are forced to evaluate a situation in the blink of an eye, according to the complex criteria set out by the laws of the game. It cannot be a surprise to anyone that they have made so many mistakes of late.

Players are increasingly able to manipulate the rules in their favour. Joel Selwood of Geelong openly admitted to manoeuvring his body during a tackle in order to force high contact.

“There is a little bit of an art to it,” Selwood told The Age.

“You can talk about the whole thing that I duck but I do it to the rules at the moment and I will continue to do it until they get changed.”

The great irony is that the rules are in place to protect the very players that are exploiting them for a free kick. Dermott Brereton is a passionate critic of such acts and made his stance clear on FoxFooty’s AFL 360.

“If you lower the centre of your gravity to make the tackle come up, to me that’s like head ducking. I hate [it],” Brereton says.

Rodney Eade was less scathing but warned that there is a problem.

“I don’t think it’s huge enough yet but its heading that way I think if it continues like it is and its still being paid, teams, clubs, coaches, players will really draw more on it, there’s no doubt,” Eade said on FoxFooty.

The Laws of the Game Committee has to think long and hard about the current state of the game, and whether they should saturate it with new rules or simply leave it alone.