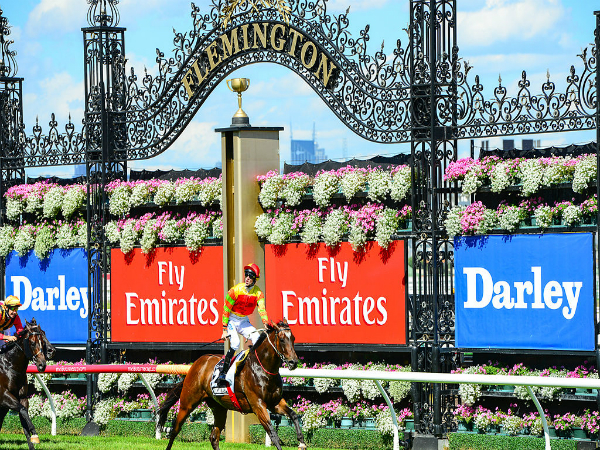 This weekend the Autumn Racing Carnival reaches its Victorian pinnacle, with Flemington hosting its most prominent meeting outside of the famous Flemington Carnival, Super Saturday.

The two major draw cards of the meeting are the fantastic Group One races, the Newmarket Handicap and the Australian Cup with another Group One–the Coolmore Classic–to be contested in Sydney.

All nine races at Flemington are stakes races, with enormous prize money totalling $3,161,000 available, and competitive racing across the meeting. This quality racing has become synonymous with Super Saturday, which has developed consistently each year into what is now one of the highlights of the racing calendar.

This year’s instalment of the time-honored $1,005,000 Newmarket Handicap is arguably one of the best races of the year worldwide. The top three sprinters in the world, Lankan Rupee, Terravista and Chautauqua, as well as the up-and-coming three-year-old Brazen Beau will highlight the race.

In what is set to be a classic race, the punters have failed to separate the four horses in the market, with Chautauqua the current favourite at $2.90 and Terravista at $6, the longest odds of the four. Terravista will be looking to defy history and become the first horse to win the race first-up in his first run since winning the Darley Classic last Spring.

The $1,005,000 Australian Cup is sure to draw the attention of the general public, with last year’s Melbourne Cup quinella of Protectionist and Red Cadeaux ready to battle once more, yet this time over the much shorter distance of 2000m. Red Cadeaux has travelled down to Australia specifically for this race, but is going to have to deal with some fit and firing local horses such as the current $4.50 favourite, Happy Trails.

Protectionist was solid first-up at Caulfield, but didn’t necessarily run to the expectation of many punters, so this weekend will show whether the real Protectionist is back or not. It’s certainly a race for the ‘crowd favourites’, with the infamous Tasmanian battler The Cleaner also taking up the challenge on Saturday.

Seven other races on the card ensure a fantastic day of racing from start to finish, with strong fields assembled in all races. The highlights of these races include the Group Two VRC Sires’ Produce Stakes over 1400m for the 2-year-olds, the MSS Security Stakes over 1100m for the three-year-olds and the TAB Kewney Stakes for the three-year-old fillies.

Perhaps the most intriguing horse running on Saturday is Sistonic, who lines up in the MSS Security Stakes. She is a three-quarter sister to Black Caviar and has shown plenty of promise in the early stages of her career.

Sistonic won her first two races impressively, before a gutsy fourth last start after setting a wild tempo in the lead. She is currently the $3.80 favourite in the market ahead of some extremely promising horses including Zeletto, Nostradamus, Royal Snitzel, Tudor and Group One winner, Earthquake. Only time will tell if she can handle the famous straight that Black Caviar made her own.

With the other states taking a back seat this weekend, NSW is set to support the Flemington meeting on Saturday. A handy field has been assembled for the highlight of their day, the $607,000 Group One Coolmore Classic at Rosehill.

Star filly, First Seal, is the current favourite at $1.70 and it is hard to make a case for any of the other fillies or mares to beat her to the finishing post. The dominance of her last win in the Surround Stakes was breathtaking, and she could be the next big thing in Australian racing.

The 2000m Sky High Stakes will provide the building blocks for the stayers to work towards the big races of The Championships. Godolphin import, Hartnell, looks likely to take out the Group Three event after a slashing run in the Chipping Norton Stakes a fortnight ago. Hartnell flew home for second on that occasion behind stablemate and current equal favourite for the Caulfield Cup and Cox Plate, Contributer.

The advantage of a more quiet weekend throughout the country, like this week, is that the complete attention of racing fanatics can be focused on a single point. Despite the strong racing in Sydney, it would be hard not to agree that Flemington will be the centre of attention on Saturday. Competitive betting races with quality fields and in-form horses will ensure that the huge crowd at ‘headquarters’ really does have a Super Saturday.

Conor Walsh is a first-year Media and Communications (Sports Journalism) student. Conor has completed a Diploma in Stud Management (Horse Breeding). You can follow him on Twitter: @ConorWalsh63.