A gloomy winter day wasn’t enough to dampen the enthusiasm of those attending a rally in Melbourne in support of same-sex marriage.

City streets came to a standstill on Saturday as more than 1,000 people took the opportunity to send a clear message to Australia’s federal politicians, who will soon report to parliament on the views of their constituents towards same-sex marriage.

The event was part of a national day of action but host, comedian Tracy Bartram, says it was not about sledging the federal government or Prime Minister Julia Gillard, who believes marriage is between a man and a woman. 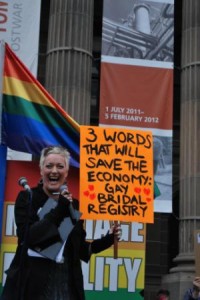 ‘It is about speaking to them. This is not about gender or sexuality. It’s about human rights,’ says Bartram.

From parents with gay children, to gay couples wanting to marry and those still discovering their sexuality- everyone had something to say when asked what they would like to tell the PM and the ruling Labor Party.

‘I think I should have the right to be married to who I want to,’ says rally participant Jack Crawly.

The Australian Sex Party’s Joel Murray agrees: ‘If love is love why should we discriminate against who should get married?’

Simone and Emma are a young lesbian couple.  They’ve urged the Labor Party to change its position on same-sex marriage when it debates the issue at its National Conference later this year.

‘We are in a changing world and it’s just what needs to happen,’ says Simone.

Human rights advocate, Coral, had a pointed question for the PM: ‘If you had a child would you like them to be able to get married whether they were straight or gay?’ 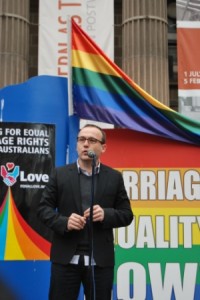 Adam Bandt talks to the crowd.

Federal Greens MP Adam Bandt, one of the key figures in putting the issue of same-sex marriage back in the political spotlight, was among the few politicians at the Melbourne rally.  In his speech, he admitted to having a joke with other politicians such as Bob Katter, who are opposed to same-sex marriage.

‘If you are against gay marriage the answer is simple, don’t marry a bloke.’

With a recent poll finding that most Australians believe same-sex marriage is inevitable, those attending the weekend rallies are hoping their message gets through sooner, rather than later, to the politicians who hold the power to make it happen.

Jyade Old is studying the Graduate Diploma of Journalism at La Trobe University and is part of upstart‘s editorial team. Follow her on Twitter: @jyadvantage.