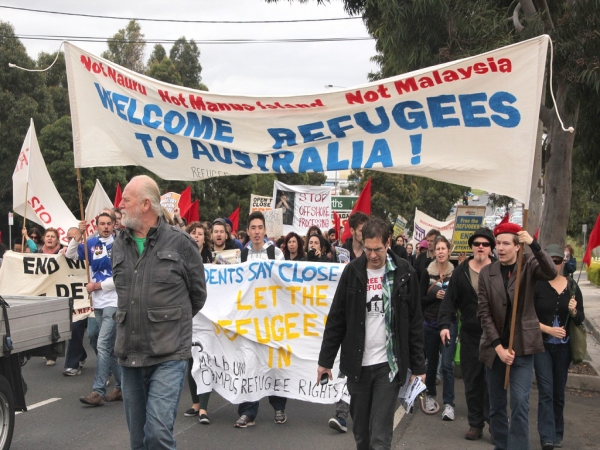 ‘Stop the boats’ has been an election-winning rhetoric for successive governments, and Turnbull looks unlikely to change suit.

However, the public may be slowly turning their backs on the slogan.

Recent events, including the continuing European migrant crisis, have shifted global attention to the humanitarian struggle of refugees.

Images of drowned Syrian toddler, Aylan Kurdi, whose lifeless body was washed up onto a Turkish beach, sparked global outrage.

The public began to pressure the government to do more, and Abbott responded, announcing that Australia would accept another 12,000 Syrian refugees.

The initiative, named after the three-year-old Syrian boy, invites people to offer their home, clothing, food, toys, and even their time.

At last month’s Light the Dark event, hundreds of Melburnians rallied together to show support of refugees. Similar vigils were held across the country.

Late last week, 1,200 people, including Australian of the year, Rosie Batty, called on the prime minister to shut down offshore detention centres, Manus Island and Nauru.

The calls came amid allegations that sexual abuse and violence is rife within the centres.

However, finding a political solution to a seemingly insurmountable problem has been a matter of contention for years.

Earlier this year, the United Nations’ special rapporteur on torture found that Australia is in violation of international conventions in their treatment and offshore processing of refugees.

Increasing public acceptance of refugees, and the number of initiatives emerging, suggest there is room for these people in Australia.

Ezatullah Alam tells upstart that as a refugee, his experience of Australian society has been an overwhelmingly positive one.

Alam arrived in Australia with his family in late 2007 on a humanitarian visa.

Originally from Afghanistan, Alam’s family sought protection after his grandfather, a governor, was killed by a suicide bomber in 2006.

“When I came here, I couldn’t spell my own name, now I have finished a degree in international relations and I am in my second year of a law degree,” he says.

Australian Multicultural Education Services found his family a house, and enrolled them in English language courses.

However, he says it was the kindness of strangers that helped them achieve a better life.

“At that time my father did not have a driver’s license, so there was an Aussie guy [who] used to take us shopping to supermarkets and other places for a few good months until my father got his license,” he says.

“His wife used to bring books for me and my other siblings, and he was trying very hard to find my father a job at the time.”

Alam says that while the majority of Australians have been incredibly receptive, there have been a few exceptions.

“Not bullying, but on some occasions, I have received some racist comments, but I would say that sort of racism takes place in every country. In every society there are good and bad people,” he says.

“I think these days Australians have more sympathy with Syrians.”

“I think in the last few weeks the attitude towards people seeking safety has seen a huge shift,” he says.

“If The Herald Sun can run front pages saying ‘Let Them In’, that’s a radical change from their line in the past.”

But he says there’s still room for improvement.

“Broadly speaking, there’s clearly enough misconceptions and apathy in our country to enable the harmful policies to continue. If people knew what was happening in Nauru and on Manus, I don’t think they’d tolerate it.”

He says the problem is more than just policy, it’s the rhetoric behind them.

“The policy harms people, but it’s the rhetoric that harms our national profile,” he says.

While changing perceptions are a step in the right direction, Matthews says that political representatives need to show leadership on the issue.

“Australians deserve to be very proud of the way they have come together and demanded the government show compassion to the people of Syria,” he says.

“But, we’re still keeping people locked up who’ve fled this very same war, and others like it.”

Caitlin McArthur is a third-year Bachelor of Journalism student at La Trobe University. You can follow her on Twitter here: @CaitlinMcarthu1.