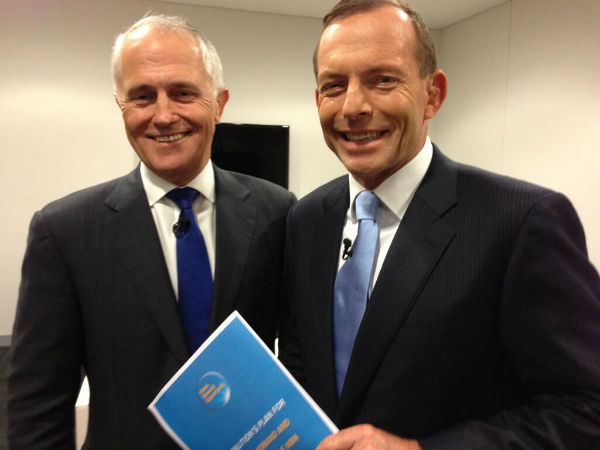 I’d laugh if I wasn’t so busy crying.

Not even a month after #AusPol’s shit was cooperatively misplaced – after Julia Gillard’s reign came to an end at Bill Shorten’s blood-stained, dagger-clasping hands – would-be political clairvoyants are once again taking to the blue bird medium; hashtagged to the hilt.

The ever-expansive beast known as social media ran hot with rumours of a Malcolm Turnbull-led Coalition, with the prospect of the pomegranate extraordinaire spitting the axiomatic remnants of Tony Abbott into the garbage disposal sending many in raptures.

For the sake of any sort of political discussion, please, let this Twitter rumour go the way of premature online eulogies like those endured by Morgan Freeman and Bill Nye, and any of the ever-growing array of social media mistakes.

Malcolm Turnbull is widely – except for those within his own party, ironically – seen to be an outstanding potential Prime Minister; likely one better than both the options we’ll have on the ballot in August November September, err…2013.

But, again, won’t someone please think of the political discussion.

The past three years of a predominantly Gillard/Abbott fight to the political death have been condemned as some of the poorest in the relatively short history of Australian politics.

If the Coalition swapped Tony “Budgie Smugglers” for “Leather Jacket” Malcolm this late in the piece, they’d collectively sentence the country to a three-year span of petty partisan bickering.

In the immediate aftermath, an uncomfortably smug Kevin would smirk his way through press conference after press conference riddled with clichés from 1980s vernacular. “Bad to the bone”, “airhead” and “to the max” would almost certainly work their way into a doorstop, which Mr Rudd would deliver while on break from rocking around the place.

An overjoyed Albo, especially fiery Tanya Plibersek and vitriolic Penny Wong would take aim at the Coalition’s silver-fox front man and his fellow front benchers, returning serve for all the detrimental dialogue spouted by the Coalition over the course of the 43rd parliament.

This may all sound great, in terms of entertainment value it’d be almost unmatched; but it’d be akin to the sort of dim, obtuse enjoyment stemming from taking in Michael Bay’s latest Transformers flick, or better yet, Sharknado.

Another leadership spill would drive Australian politics to the point of mutually assured destruction, dooming any intelligent, thoughtful discussion to an extended nuclear winter, while slogans and Q&A appearances would serve as default Prime Minister auditions.

With that, a plea – albeit, one destined to go unnoticed before ultimately falling upon the deafest of ears.

Let’s spend less time looking at Nielsen’s and News’s, and for the sake of all things Keating, consign the constant chatter of leadership change to the scrapheap.

Rather than installing a new controller at the helm in an effort to turn around sliding poll numbers, perhaps stable and sustained government – or opposition – could perhaps be the best way to lead a country.

Let’s leave the leadership changes where they belong, at elections.