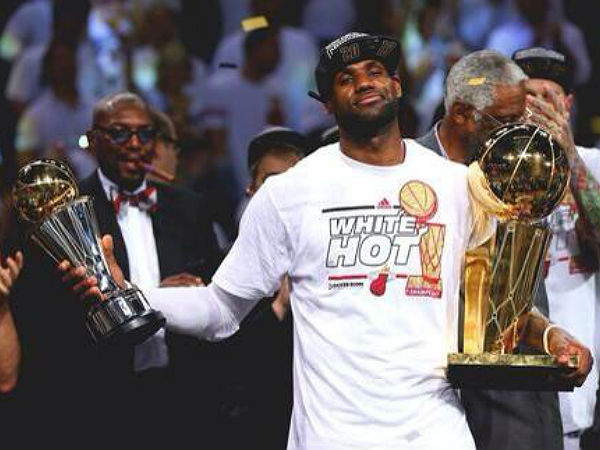 The first time I saw LeBron James was on the cover of Slam Magazine.

It was August 2002 and James – the freshly minted High School Player of the Year – shared the cover with fellow teen prodigy, Sebastian Telfair.

The 17-year-old LeBron, with a gold chain dangling and headband pulled all the way down, looks unimaginably young. That may sound like an obvious statement to make about a teenager, but it’s a striking reminder of how James has grown up before our very eyes.

No player, not Lou, Kobe, KG, Tracy or Oscar, entered the league with such burdensome weight already on his shoulders.

In the aforementioned article, the historical narrative of James was already being crafted. Bryant and Garnett comparisons were hinted at, if not overtly stated, setting the pass-mark for Akron’s finest at an all-time great level.

In the ten, going-on eleven years since, no athlete has operated – and grown up – under the same scrutiny.

Since ESPN first broadcast from an Ohio high school gym, since he was drafted and since his first Cavalier game, we demanded brilliance.

Collectively, we needed LeBron. We needed him to succeed, to fail and, at times, to perplex. If James is the chosen one, we’re the ones who chose him.

After that Dallas defeat, his historic standing was openly in question; the game’s greatest player found himself humbled upon its greatest stage. Almost immediately, some put a line through his all-time ascension.

Was he more Jerry West than Jordan? An agonisingly great player, forever to remain hounded by an inability to capture the championships his skill dictated necessary?

Then, a year ago, he won his first. But, inevitably, we raised the bar again.

After all, it was only one championship. And, I mean with that whole lockout thing considered; it didn’t quite make up for the one he lost the year before.

When LeBron dragged his teammates once again to the brink of glory, the questions resurfaced.

Win, and James would be well and truly on the path to chasing down the mantle of “GOAT.” Lose, and he’d be a comparative bum. The jokes would start, the doubters would increase in volume and LeChoke would return.

Even for a man who’d spent the majority of his life in the spotlight, they’d never been brighter than during Game 7.

Fittingly, the final act of cementing his status in history would be arguably his finest. It was a masterful performance – 37 points, 12 rebounds and four assists, along with countless storybook moments. The three-point barrage, the step-back sealer, and the steal on Manu Ginobli’s desperate drive as the clock ticked towards zero.

He tied the record for points scored in a seventh finals series game.

When he collected the Finals MVP, he joined Larry Bird and Jordan as the only players to be named regular season and Finals MVP in the same season twice.

He eradicated any lingering doubt over his ability to perform in the grandest of moments, with his final jump shot already being added to Greatest NBA Finals Moments montages on YouTube.

But, most of all, he reached a level even his staunchest of critics can no longer question.

LeBron James is an all-time great; exactly what we demanded all those years ago from a fresh-faced hoops phenomenon. Everything from hereon out is a bonus.

Despite another title won it’s still too soon to rank his overall standing, but it somehow doesn’t seem as important anymore. He’s in the top tier; that much is known. Perhaps the only remaining criticism is he isn’t Michael.

After the game, James said he is blessed to walk into an NBA lockerroom and see a jersey with his name on it; as fans, we’re blessed to be witnesses.