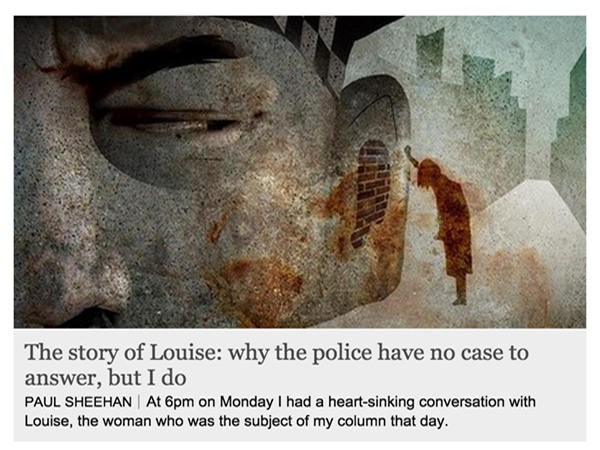 Paul Sheehan’s article, ‘The horrifying story of Louise’ detailed the gang rape of a young Sydney nurse under the pseudonym ‘Louise’ by six Arabic speaking men.

The piece raised alarm bells in the media, and cursory research by other writers quickly cast doubt on Sheehan’s interviewee’s claims.

Once the allegations made by ‘Louise’ were found to be “palpably false,” Sheehan scrambled out an official apology. Within a week he was suspended.

It has been easy for Media Watch and other publications to denounce Sheehan’s “scaremongering” article and point out his failure to verify basic facts. But the consequences of Sheehan’s article run much deeper than the damage he has done to his career and the reputation of the Sydney Morning Herald.

Sexual assault and rape is still drastically underreported and under convicted. A 2005 study estimated that only 19 per cent of Australian women reported their sexual assault to police.

Another study  that ran over three years found that of all the rape allegations reported to Victorian police, only 2.1 per cent of these allegations were proven false. Articles like Sheehan’s make it easier for rape apologists to deny allegations and make it even harder for survivors to report these crimes.

“Publishing a completely unchecked allegation of rape is not only extremely damaging to journalistic standards and reputation, it’s catastrophic for sexual assault victims,” feminist writer, Amy Gray told the ABC.

The Age, The Herald Sun, and The Australian outline a basic procedure for reporting on suicide in their code of conduct. None of these publications mention a policy when reporting on sexual assault, with the exception of The Guardian: “The press must not identify victims of sexual assault or publish material likely to contribute to such identification unless there is adequate justification and they are legally free to do so.”

The Australian Press Council released a brief Advisory Guideline on family and domestic violence reporting last week, which included avoiding “casual stigmatisation, such as by stating or implying that the violence was “caused” by a person’s mental illness or culture” and avoiding sensationalism.

The safety of the survivors and their loved ones was at the forefront of the discussion, as their trauma is often exacerbated by interviews and media coverage. The guideline advises journalists to include information about support services in their articles.

The Advisory Guideline also touched on the legal restrictions of reporting family violence. However, these restrictions are often inconsistent between states.

The most binding rules when it comes to reporting on sexual assault are the laws about court reporting.

“The real concern is that jurors will hear or read material that is not part of a trial, and make their decision based on that. There are rules to stop the identification of a sexual assault victim. They apply throughout court proceedings,” former court reporter Peter Gregory tells upstart.

“Breaching those rules could put journalists in danger of committing an offence, being in contempt of court or providing the possibility of being sued for defamation,” he says.

More guidelines about reporting on sexual assault should not dissuade journalists from writing about the issue. The media can play a large part in advancing the national discussion of sexual violence and can create lasting and positive changes.

If the Australian Press Council recently managed to collaborate with experts, survivors, journalists and the police to produce guidelines for family violence, then maybe the response to Sheehan’s article can give way to more responsible reporting and publishing regarding all types of sexual violence.

Rachael Roberts is upstart‘s Media Editor and a third-year Bachelor of Journalism student at La Trobe University. You can follow her on Twitter: @1rachaelroberts.