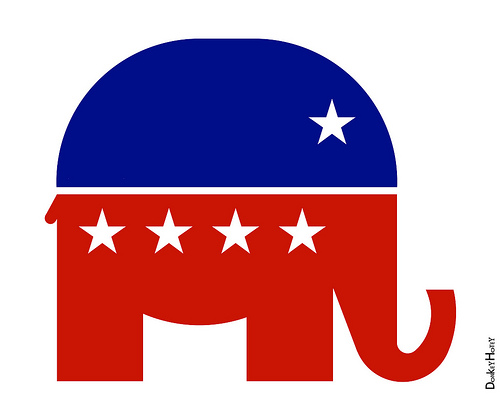 Clinton imparted a message of compromise and reminded the audience of President Obama’s commitment to ‘constructive cooperation’. In doing so he highlighted a fundamental truth about Congress; it’s broken. And, quite frankly, the Republicans, or rather the current incarnation of the party, are to blame.

The 2010 midterm elections saw the electoral map turn red with the blood of incumbent Democrats, as Republicans regained the majority in the House of Representatives (the lower house). Republican success at the polls could be attributed, at least in part, to the efforts of the Tea Party.

However, their help came at a price.

This seemingly grassroots movement would not tolerate compromise or dissent within the ranks, and mainstream Republicans discovered this quickly. Many Veteran Republican senators and representatives labelled as moderates lost elections against un-tested Tea Party candidates.

When compromise becomes a dirty word within Republican politics and anyone seen not embracing the conservative agenda is pushed out of a job, government cannot function. In the past two years it hasn’t.

They are no longer able to carry out the basic duties of Congress, namely, to pass laws. Whereas previous Congress’ have passed upwards of 300 laws, the current Congress has only passed 54, 17 of which were to rename post offices and other places.

This isn’t due to fewer bills being introduced but because cooperation between Republicans and Democrats has diminished to the point where even agreeing on how to keep the lights on has become difficult.

The federal government is funded through the annual appropriation process  in Congress. This requires both chambers to pass 13 bills by October 1. While not every Congress passes all 13, they do manage to pass, at the very least, three. By October 1, 2011 the 112th Congress passed zero.

This ‘my way or the highway’ mentality peaked during the debt-ceiling debacle when Republicans were seen to effectively take the economy hostage, eventually resulting in index provider, Standard & Poor’s, downgrading America’s credit rating for the first time in history. The second highest ranking Republican in Congress, Senate Minority Leader, Mitch McConnell, said ‘the economy was a hostage worth ransoming.’

And he’s promised to do it again.

Today Republicans and Democrats struggle to find a solution to the deal that ended that debacle and created the ‘fiscal cliff’, a combination of compulsory spending cuts and tax hikes that could plunge America into a recession as early as next year.

The Republican Party has either lost all sense of how to govern or has become encapsulated in a bubble that separates them from the outside world.

Still worse is their laser-like focus on abortion.

They have voted to deny funds to Planned Parenthood, a preventative healthcare provider for low income women, because less than ten percent of the care the organisation provides involves abortions and contraceptives.

The current Republican anti-abortion stance would also outlaw in vitro fertilisation since they believe life begins at conception, the moment the egg is fertilised.

While it is debatable that the Republicans are intentionally waging a war on women, the Democrats’ narrative is compelling.

The Republican stance on immigration has been just as troubling.

In addition to opposing the Democrat-sponsored DREAM Act, which would provide many illegal aliens currently living in the United States with a path towards citizenship, the current Republican platform opposes amnesty for illegals and funding for universities that provide in-state tuition rates to illegals, while making English the official language of the US. One Florida Republican congressman even suggested that emergency rooms should refuse care to illegals.

In Republican-led Arizona there is a law which dictates that police officers must ask for a person’s immigration papers if they suspect  them of being in the  country illegally. Critics have called the law tantamount to systematic racial profiling, since nothing in the law defines what amounts to reasonable suspicion.

These extreme views have alienated the Republican party from women and minorities. In recent weeks Romney has polled at zero percent among African Americans. Even John McCain polled at four percent among the same demographics in 2008.

To win in November Republicans are heavily relying on the white vote.

Ronald Brownstein of National Journal calculated that for Romney to win he would need to capture 61 percent of the white vote, assuming whites make up the same percentage of the electorate that they did in 2008. This would be equal to the best performance ever for a Republican presidential candidate in that group.

But this heavy reliance on the white vote doesn’t reflect the ever-diversifying America of today. And quite frankly, this strategy may never work again assuming it even works now.

To quote Bob Dylan, ‘the times they are a changin’.

But the Republicans would never know it. Their victories at the ballots in local elections and special recall votes have been validating their far-right trajectory. Only a major loss in November will make them re-evaluate their situation.

Right now the Republican vision for the future is outdated. While they don’t, and shouldn’t, have to abandon their beliefs, they do need to exile the extremists to the fringe and reclaim the party of the great visionary, Abraham Lincoln.

Rameez Abdeen is a second year undergraduate of Journalism student at La Trobe University. You can read more of his views on American politics on his blog or follow him on Twitter.