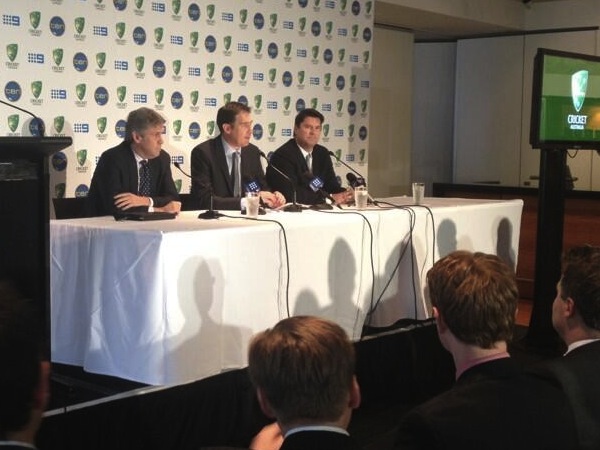 In front of a packed media conference on Tuesday inside the MCG, a seemingly defeated Gyngell sat to the right of Cricket Australia (CA) boss James Sutherland as the details of a renewed, altered and rather augmented broadcast deal were announced.

“This was an ‘ouch’ moment for me,” Gyngell said. “I don’t know how smart I am, but I’m certainly passionate and committed to them.”

Gyngell didn’t hide his displeasure at forking out Nine’s share of the whopping $590 million deal – a figure 118% above the previous agreement which began in 2006. He had his commercial television counterpart to thank for that.

Let it be said, McLennan was the happier of the two television network bosses.

After an initial bid of $500 million was laid down by the Ten network, Channel Nine looked certain to lose the broadcast rights – the first-time since ‘Packer’s War’.

A mere 50 minutes shy of Monday night’s deadline, Nine activated its invaluable ‘last rights’ clause, worked out a deal, and secured the prized agreement for a further five years.

Gyngell couldn’t help but pull at the heart strings of the cricket tragics when justifying his forced hand.

“There was never any doubt Channel Nine was not going to get the cricket,” Gyngell said.

“It is Australia’s national game, it’s is in our DNA and we are very proud of it. A lot of people would say that we over-invest in it from a broadcasting point-of-view, but it has defined our network, it has defined our standards in broadcasting, it reflects in our newsroom, in the accuracy and the way we cover cricket.”

“But, more than happy to pay it because it’s an outstanding sport and it will continue to make Channel Nine the number one network.”

Under the renewed deal, Nine retains the rights to broadcast all of Australia’s international fixtures for the next five years, which include two Ashes campaigns – the first beginning July 10 this year – and series’ against India and South Africa. They will be live and without host city ‘blackouts’.

Channel Ten is the new player in this scenario, and could be a sign of things to come for cricket broadcasting in this country.

Unsuccessful in its bid for complete control, Ten has to settle for replacing Fox Sports in broadcasting the Twenty20 Big Bash League competition. Once a product of Foxtel’s exclusivity, the Big Bash League will be shown live on free-to-air television – the first time domestic cricket has seen such rights for over seven years.

If the networks keep its promises, it’s a win for cricket fans all over Australia.

Cricket Australia says the revenue generated – approximately 75% of the cash fall – will be spent on its fans, teams and participation at the lower level, going towards CA’s aim of turning cricket into “Australia’s favourite sport.”

Digital coverage will be bolstered by a $60 million joint venture from Nine and CA, with increased live streaming on all smartphone, tablet and PC devices, a brand new app and an abolishment of screen size restrictions.

For the cricket tragic, it gets even sweeter.

CA is currently negotiating with its broadcast partners for free-to-air coverage of the Sheffield Shield, Ryobi Cup, PM XI and Women’s International T20’s, which will also be a major boost for the usually less popular forms of the game.

Nine’s renowned commentary team will likely stay the same, and the voice of Australian cricket, Richie Benaud, will not be going anywhere while Gyngell is in charge.

“Richie will do cricket for as long as he wants to do cricket – I will never be telling Richie what he can and can’t do.”

Channel Ten remains unclear on who will commentate the BBL, but may look towards luring Fox Sports’ expert cricket commentators Brendan Julian, Damien Fleming and Mark Waugh, all of whom have become closely aligned with the competition in recent years.