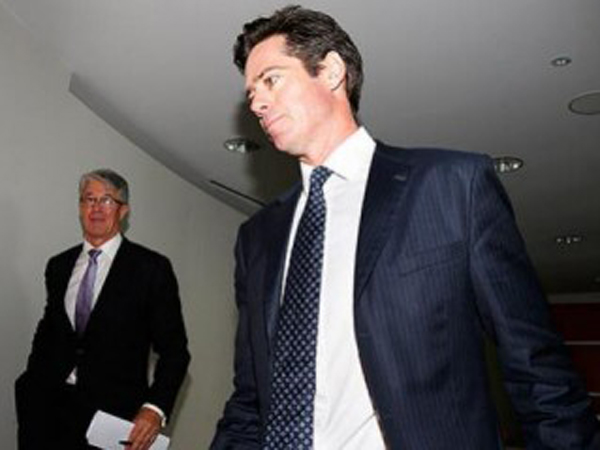 Gillon McLachlan has long been touted as the successor to Andrew Demetriou and that was made official in a press conference on Wednesday at AFL House.

The announcement was made by AFL Commission Chairman Mike Fitzpatrick who said that it was an “exhaustive search” that saw 100 potential candidates considered.

“I made it clear we would appoint the best person to fill the position, I’m pleased to be sitting with Gillon McLachlan, who is indeed the best person,” Fitzpatrick said.

Demetriou will vacate the roll on June 5 and allow McLachlan to take the reins after serving 11 years as AFL boss.

McLachlan paid tribute to his predecessor and congratulated Demetriou on his time in the top job.

“I want to congratulate Andrew Demetriou on his success and thank him for his support.  He leaves incredibly big shoes to fill,” McLachlan said.

The new CEO has some urgent issues to address and must once and for all put an end to the Essendon supplements saga.

McLachlan appears to be a strong figure and an appropriate fit for arguably sport’s toughest job.

In 2012 he reportedly turned down the position as NRL CEO which showed that he was an exceptional administrator that other sporting codes were keen to poach.

His experience and the role he has played within the AFL are the main reasons why he was always considered as Demetriou’s heir apparent.

Respected sports reporter, Ian Cohen, believes the timing of the decision is fitting and that McLachlan will bring a fresh pair of eyes to some pressing issues.

“We knew it was an in house decision that was going to be made, it’s not like anyone had to come up to speed with a lot of those issues, Gillon would’ve been sitting at the table when a lot of those discussions were happening,” Cohen tells upstart.

Many AFL fans believe variable ticketing prices are a concern and Cohen is confident he will look after the fans.

Cohen also praised the AFL’s handling of the announcement and thinks it is a pleasing outcome, in contrast to player movement decisions that tend to pull focus.

“It means that we haven’t got it dragging all the way through the season,” Cohen says.

McLachlan will now be given the opportunity to forge his own imprint on the game and tackle issues his way.

He identified that he serves four masters: fans, community, clubs and players.  The way he illustrated this should excite the AFL community as he has a strong mantra and is passionate about protecting the integrity of the game.

McLachlan described his leadership as being about “consensus and collaboration” which will be integral in the coming months.

The ASADA report relating to Essendon’s supplements program is due to be released in May and McLachlan will be looking to put an end to it.

He will revise the current variable ticket pricing model because, by his own admission, it has not been properly communicated to the fans.

McLachlan will attempt to assist clubs stuck in the current agreement with Etihad Stadium but insists once the AFL takes ownership of the stadium they will be better looked after.

These are the key issues that await the new CEO.  He has been able to succinctly examine them and provide the AFL public with an appropriate direction for the league and its fans.

Under his guidance a new era in the AFL begins and he will endeavor to ensure the game prospers at every level.

Sean Munaweera is a third-year Bachelor of Journalism (Sport) student at La Trobe University, and a staff writer for upstart. Follow him on Twitter: @sean_muna.