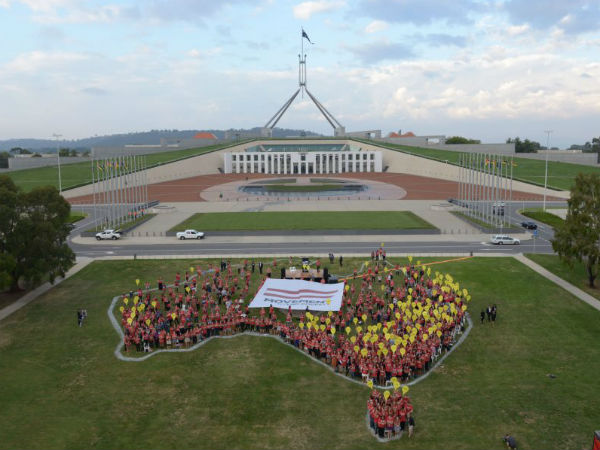 The final question on ABC’s Q&A on Monday night highlighted the idea that Australia’s youth are politically disengaged, opting to don a wristband instead of putting themselves out there to make real change.

Last week, 800 young ambassadors between the ages of 16 to 26 went out to try and disprove this theory.

On the 9th of March, these 16 groups of ambassadors set off from all corners of the country to partake in The Oaktree Foundation’s Roadtrip to End Poverty. This endeavour acts as the beginning of the Movement to End Poverty, a joint initiative of the Make Poverty History and Micah Challenge coalitions.

The Movement to End Poverty asks Australia’s politicians to raise the foreign aid budget from 0.35 per cent (35 cents from every 100 dollars) to 0.5 per cent by 2016 and then to 0.7 per cent by 2020, a bipartisan promise made in the year 2000 in line with the Millennium Development Goals.

Currently 1.3 billion people around the world live in extreme poverty, which is defined as living with under US$2 a day. Yet, since 1990, extreme poverty has halved, a fact that has driven organisations like Oaktree to believe that extreme poverty can be eradicated in Gen Y’s lifetime.

Roadtrip participants went all over the country, targeting most of the marginal seats as well as most other electorates. They asked the public to show their support to help eradicate extreme global poverty, with the goal of accumulating 50,000 signatures by the time they arrived in Canberra.

21-year-old Nicola Hutchinson, an ambassador from Victoria, articulated just how important this organisation feels the issue is.

“Australians are good at talking themselves up like saying that we’re the lucky country and that we give everyone a fair dinkum go, but I think this is really time for us to walk the talk”, she said.

“We have a responsibility as human beings and Australian citizens to do our bit for other people who are struggling.”

Much more than just a campaign, the roadtrip serves as a way in which these young people can make themselves leaders. They can walk out of the week ready to, not only do their part to eradicate global poverty, but to also shake the passive Gen Y stereotype.

“We’re always told that unless we have a lot of experience that you won’t be able to achieve anything. I think people scoff at the power of young people and that’s why Oaktree stands out to me, it’s successfully run by young people,” says Hutchinson.

After traversing across their home states, the roadtrippers all came together on Thursday the 14th in Canberra, to make some noise on the lawn of Parliament House. In the early hours of sunrise, they held a demonstration in which the ambassadors formed a map of Australia, representing their electorates with signs that resembled Google drop pins.

An address from 24-year-old Oaktree CEO Viv Benjamin, reiterated the message that Australians need to give their fair share to support less fortunate nations.

“We will dedicate not only our votes, but also our lives to ending extreme poverty in our lifetimes”, she said.

The ambassadors then met MPs from their electorates, asking these politicians to take action for change.

Though not every MP was convinced to sign the petition, ambassador Toni Massara says that the roadtrip was still a success; especially the actions in Canberrra.

“It was definitely beneficial to hear MPs opinions on the matter, both the negative and positive”, she said.

“The entire day allowed for the campaign to reach a wider audience which is awesome.”

While not entirely successful, the message was left that this is only the beginning of a massive campaign by Make Poverty History and the Micah Challenge, and it will extend all the way up to the federal election in September.

Among the young ambassadors, there was also a sense of personal growth gained from the experience.

“The roadtrip was by far the most challenging, tiring, exhausting, stressful, most inspiring, best week of my life so far”, Massara said.

“It has fuelled my fire and ignited my passion and I’m so excited to see what the future holds!”

So what’s next for Oaktree and their ambassadors?

The Oaktree Foundation will move onto their annual event, Live Below The Line, where participants live off $2 of food a day for five days to raise awareness and funds towards eradicating extreme poverty.

But for now, after a week of sleeping in scout halls and tin sheds; going without showers and eating cereal doused in warm milk, these young ambassadors need a well-deserved break.