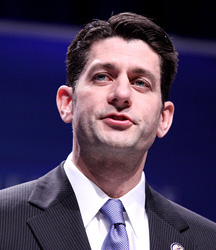 If we are to believe the reports of online media in the United States, then Mitt Romney will select Congressman Paul Ryan of Wisconsin as his running mate in the campaign for the White House.

The selection of the Vice President will not be formally announced by Mitt Romney until 9am (EDT time) at an event in Norfolk, Virginia. But for those who get their news online, from Twitter or from political blogs, this will already be old news.

At just past midnight on Saturday morning, online media in the US was sent into a whirlwind. The Huffington Post had reported that according ‘to two sources with knowledge of the decision’, the Wisconsin Congressman would be announced as Romney’s Vice-Presidential candidate.

Although unnamed, the two sources were clearly trusted. A wide scale shot of Paul Ryan and Mitt Romney was splashed across the homepage of Huffington Post within a matter of minutes.

And the Post wasn’t not alone. In the hour following their reports, the Twittersphere erupted, with Huffington Post and POLITICO leading the coverage.

Shortly before midnight, Jonathan Martin and Maggie Haberman of POLITICO reported: ‘a source deeply involved in the vetting process’ had said ‘all signs point to Ryan’. But just after 2am (EDT) the authority of their coverage changed tact. POLITICO’s official Twitter account announced that ‘a GOP source’ told POLITICO ‘Mitt Romney has selected Rep. Paul Ryan of Wisconsin to be his Vice Presidential running mate’.

The announcements were further carried by other media organisations, including NBC who broadcast the news via its Twitter account and then followed with a ‘strengths and weaknesses’ piece on the Congressman. Associated Press followed the same format, releasing an initial tweet and then following with their own article that referred to ‘a Republican with knowledge of the development’.

It is unclear who this Republican is, or whether it is the same authority that spoke to the Huffington Post or POLITICO, as ‘the official spoke to the Associated Press on the condition of anonymity because this person was not authorized to disclose the decision’.

Despite the flurry of media activity, we know that the direction of a US federal election is never a sure thing. As a day in politics is said to be an eternity, we may have to wait until Romney’s formal announcement at the Nauticus Museum.

For now, we are left to assess why so much attention is focused on the selection of US Vice-Presidential candidates, who have little legislative influence once elected to office.

We know too well the media circus that centered upon Sarah Palin in the 2008 election, but what of Paul Ryan?

It was Bill Burton, the chief of Obama’s Super Political Action Committee ‘Priorities USA’, who said last week that: ‘Vice Presidential nominees almost never matter…but if it’s the author of the most anti-middle class budget ever, this one does’. While acknowledging Burton’s obvious political interests, and Priorities USA’s contentious attacks on Mitt Romney in the past week, he may have a point.

Electorally speaking, Romney’s selection of Congressman Ryan would be seen as a clear attempt to galvanise the conservative Tea Party base that may still be uneasy in regards to the candidate’s Mormonism, his passing of health care reform in Massachusetts, or even his more moderate Republican positions that have been drowned out by campaign posturing.

Romney’s selection of Ryan may be seen as a strategic move to ensure the support of the GOP’s conservative right and the Tea Party, particularly in the face of controversial attacks from Democratic PACs.

In this sense, the selection of Congressman Ryan could be seen as a similar ploy to McCain’s pick of Sarah Palin in the lead up to the 2008 election – it’s a tip of the hat to the electoral hardline right of the Republican Party. After all, Congressman Ryan is, as Governor Sarah Palin was in 2008, a young and relatively inexperienced politician who is championed as an ambassador of the Tea Party movement.

Despite taking centre stage during the debt ceiling negotiations in July 2011, Ryan’s policy credentials are limited given his youth, despite their seemingly resolute adherence to Tea Party principles. In 2011, the congressman made his name as the author of what was termed the ‘Ryan Budget‘, a deficit-slashing proposal that was passed by House Republicans, in which budget cuts were based on transforming the Medicare system into a voucher system. The budget, and Obama’s reaction to it, made Ryan the darling of the Republican Party.

Yet Ryan Lizza of The New Yorker, who interviewed the congressman twice for a August 6 feature, pointed out that the congressman holds no private sector experience beyond ‘summer jobs working at McDonalds’ or ‘waiting tables as a young Washington staffer’. While Romney bases his claim to leadership on private-sector experience, his running mate has little to offer in this regard.

But there are of course a few obvious distinctions between Palin and Ryan.

Namely, the Obama administration knows first-hand from the debt-ceiling negotiations that Congressman Ryan is a force to be reckoned with. Ryan is to this point, a polished and articulate performer who has proved leadership among House Republicans.  POLITICO’s Glenn Thrush reports that Obama views Ryan as ‘one of the GOP’s most formidable thinkers‘; a congressman with ‘serious’ ideas that need to be contested.

So how would a selection of Paul Ryan as a VP candidate for Romney change the political race?

For one thing, Ryan as VP would make sure that the deficit is sure to remain a key issue, along with President Obama’s economic leadership. Ryan’s selection will surely draw attention to the immense difficulty that Democrats have had with passing federal budgets over the last three years, particularly given the Congressman’s leadership in these negotiations.

If Ryan is selected, Medicare may well become a wedge issue in Democratic campaigns in swing states such as Florida. Ryan’s selection would also present challenges in Wisconsin for the Obama Campaign, given that state is Ryan’s electorate and its involvement in the Labor protests of March 2011.

Ryan may well be man who can rally the Tea Party right, but he is also a figure that will unify the Democratic left. If he is selected, it is sure to raise the stakes of the campaign.

In any case, the answers to these questions are sure to become clearer once Mitt Romney makes his formal announcement.

Henry Belot is a Global Media Communications student at Melbourne University. You can follow him on Twitter: @Henry_Belot